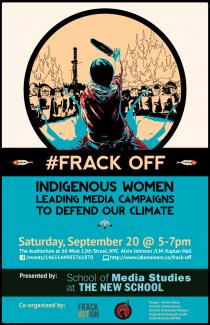 Hydraulic fracturing, commonly known as fracking, is posing a danger to Indigenous communities beyond its damaging environmental impact. First Nations in both Canada and the United State are being hit the hardest, where oil and gas companies with interests in the untapped resources of Indigenous lands are gaining ground. Fearing the effect that fracking will have on their lands and families many Indigenous women have begun to stand up with their communities to tell oil corporations, tribal councils, and their respective governments that enough is enough.

The efforts of these women came to fruition during Climate Action Week in New York on September 20 when the School of Media Studies at the New School hosted #FRACK OFF: Indigenous Women Leading Media Campaigns to Defend our Climate, co-organized by FRACK ACTION. Influential Indigenous organizers Shelley A. Young (Mi’kmaq), Kandi Mosset (Mandan, Hidatsa, Arikara), Elle-Maija Tailfeathers (Blood and Saami), and Ellen Gabriel (Mohawk) were presenters at the event. Though from different parts of North America, these women came together at the conference with a similar mission: to address the impact of fracking, and what Indigenous women can do about it.

“We knew it was important to organize a women’s event because women are the creators of life,” said Julia Walsh, founder and campaign director of Frack Action. “We cannot have life on Earth without clean water. In order to restore balance on the planet, the women must be honored and respected. So we are here tonight to listen and learn from these women. Women are leading our movement.”

The environmental damage of fracking is undisputed, yet many of North America’s Indigenous Peoples have been helpless to stop the tide of trucks and drills pouring into their sacred lands, polluting groundwater and dispersing harmful chemicals. Less acknowledged is the effect the fracking industry has had on the safety and wellbeing of female residents. Indigenous communities have seen increases in missing women, sex trafficking, and rape since oil workers have begun flooding their lands seeking employment.

Gabriel voiced her concerns over the treatment of Indigenous women and the lack of response from the government. She is in the midst of a fight over Kanehsatà:ke traditional lands in Alberta, which are in the path of Energy East and Line 9 tar sands pipelines. “Right now it’s a man’s world. In fact, it’s a rape culture,” she said. “In Canada, rape of Indigenous women has gone on with impunity. And the government of Canada refuses to have a national plan of action; they refuse to have an inquiry because it profits them to continue to oppress Indigenous people, and the best way to do it is by the life givers themselves, the women. It ruptures the family unit, and it’s another form of genocide as far as I’m concerned.”

Mossett agrees that the fracking industry has brought nothing but bad news for Indigenous communities. Long engaged in the fight for sustainability through the Indigenous Environmental Network, she has been devastated watching her North Dakota homeland become a hub for the fracking industry. North Dakota, she said, portrays the fracking industry as being beneficial for the state for the jobs that it provides. However, many of these jobs are not going to Dakota residents, as people are pouring into the state seeking work. “There are people coming in, there are women being raped. Kids being found running away from a [workman’s] camp, people being sold into sex slavery, slavery rings that are happening, drugs and alcohol,” she said.

Similar to the inaction in Alberta, Mossett affirmed that little is being done by the tribal council on the Fort Berthold Reservation in North Dakota to stop the injustices against Indigenous residents. “The current tribal council is turning the other cheek,” she said. “They’re getting very rich, lining their pockets. We don’t know where over $380 million went…it blows my mind how corrupt it is.”

It is the deadly combination of council corruption, Mossett argued, combined with North Dakota’s natural resources, that have contributed to its establishment as one of the capitals of the fracking industry in North America. “This is a common occurrence that we’ve started to see in what, for me, used to be God’s country. I’m very close to the land; it’s a beautiful place. The western part of North Dakota is the Bad Lands. It’s very, very beautiful, yet at the same not a lot of people live there so it’s very, very, very convenient for the industry,” she said.

All of the Indigenous leaders at the conference agreed that more efforts could be taken to address the frequent occurrence of missing women on tribal lands.

Young, an Eskasoni leader, has been on the frontlines of the fight against fracking in Elsipogtog, organizing on campuses and in communities along the coast and fundraising for fellow activists in legal jeopardy. She saw how little is being done to find missing Indigenous women after a pregnant Canadian woman studying the cases of missing women disappeared and was eventually found dead. “RCMP (Royal Canadian Mounted Police) didn’t even call the mother. They didn’t care. It was reported and they kept saying that they were so worried about her, and that it was unlike her, and they weren’t making any phone calls. It was just another dead Indian to them,” she recounted.

These instances of national and tribal governments refusing to address issues of the environment and women’s justice caused by the ever-booming fracking industry have served as the catalyst for Indigenous women to seek strength within their communities. “It’s so hard to do this work when so many people are against you,” said Mossett. “But we do. We get together in our communities and we organize. And we take back the power because nobody is going to do it for us.”

The speakers maintained that, living on the lands being sold to oil and gas companies, it was easy for many Indigenous people to accept what the government and corporations were than the consent of the governed. “The first thing that Chief and council did once news of this deal broke was they handed out distribution checks to every member of the tribe. These distribution checks were handed out 10 days before Christmas, for $800. I don’t know too many people who would turn down $800 10 days before Christmas, especially if you’re broke, or a single mom living on social assistance.”

In order to protect future generations from the dangers of fracking, Gabriel said, it is important that Indigenous people and activists educate themselves on the issues. “When the people decide that it’s time to take back their democracy from the corporate-controlled governments and the corporations, when the people decide that you’ve got to get up off your seats...you’ve got to get up and tell your friends, you’ve got to bring it into the schools of your children, about what’s been going on to Indigenous Peoples. Because if they had respected our lives as human beings since contact, we would not be in this terrible mess today.

“You’re never guaranteed in this movement that you’re going to win by sticking your neck out and making your voice heard,” said Mossett of the grassroots effort behind Indigenous women’s organizing. But, she added, “you’re guaranteed to completely fail if you don’t at least try."