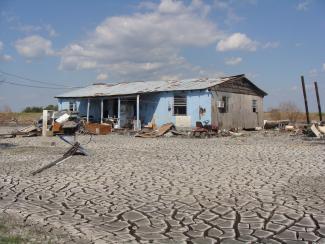 If you had taken a stroll along the bayous of South Terrebonne Parish, Louisiana in 1955, the stunning 22,400 acres of Isle de Jean Charles surely would have caught your eye. This same walk today, through the post-Andrew, Katrina, Gustav, and Ike coastline, will comprise a significantly smaller portion of your view, as the island has been reduced to just 320 acres. What has not changed since 1955, however, is the enduring spirit of life that the Isle de Jean Charles Band of Biloxi-Chitimacha-Choctaw Tribe has infused within the island since the early 19th century. For generations, the Tribe has lived in harmony with the abundant wildlife and rich biodiversity that characterize the island’s beauty. They are an integral part of the island’s ecosystem, just as the fish that swim through surrounding waters and the birds that glide along its gentle breeze.

Tragically, decades of environmental degradation deem that Isle de Jean Charles is no longer a safely habitable landmass. The destruction wreaked upon the Tribe by Hurricane Katrina in 2005, Hurricane Isaac in 2012, and the multitude of devastating hurricanes in between, has played no small part in deeply hindering the community’s social, economic, and spiritual livelihood. In 2009, following the wreckage of Hurricanes Gustav and Ike, Chief Albert Naquin lamented to The Washington Post, “It’s only a matter of time before the island’s gone—one more good hurricane, and we’ll be wiped out.” Deputy Chief Wenceslaus Billiot Jr. told Smithsonian Magazine in 2018 that after “every hurricane, someone leaves because their house gets blown away.”

The Tribe reports that 98 percent of the island’s landmass has disappeared due to sea level rise,  subsistence, and erosion, and what remains has suffered under the effects of levee, oil, and gas development. For years, they have witnessed a stead disintegration of their community as members leave the island to resettle in areas where they are not under immediate threat from coastal flooding and have greater access to the job market. The loss of land not only has forced migration, but also has fractured Tribal sovereignty, cultural traditions, and daily life amongst the community.

The community on Isle de Jean Charles falls under what some are calling the first refugees of climate change in the United States. The European Parliamentary Research Service defines climate change refugees as “migrants who move due to natural disasters and climate change.” This title evolved from the broader definition of “environmental migration” recognized by the International Organization for Migration. Climate change refugees, however, remain outside the established terminology of both United States and international law. María Cristina García, a refugee and immigrant history expert at Cornell University, explains that “the term ‘refugee’ is defined very precisely in international law… In U.S. law, for example, refugees are defined as individuals persecuted because of race, religion, nationality, membership in a
particular group, or political opinion.” Due to this rigid nomenclature, García points out that “nowhere does climate figure into it. It leaves this entire group of people without international protection or recognition.” Climate change refugees thus do not possess the status often needed to call upon the protection of international and domestic law. 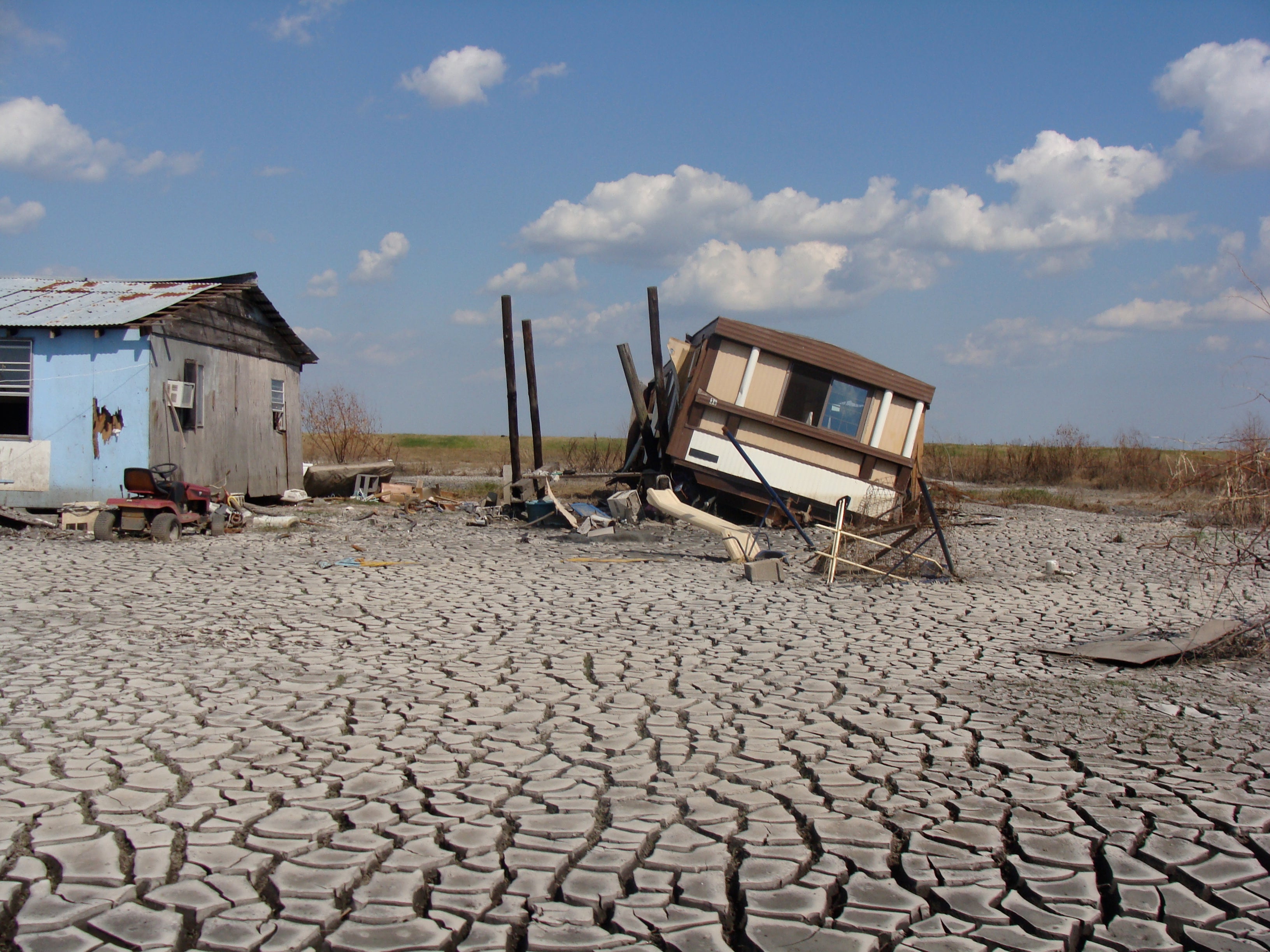 The Global Report on Internal Displacement reveals that in 2017, 18 million people across 135 countries and territories were internally displaced by weather-related disasters, while the number of environmental migrants is projected to increase to 200 million by 2050. In the United States, the Natural Resources Committee warns that 13 million Americans face the prospect of becoming climate change refugees by 2100. If sufficient action is not taken to remedy rising sea level, implement beneficial, non-harmful infrastructure, and  foster collaborative relationships between climate change refugees and governmental agencies, the Tribe, along with other communities in the United States and across the globe, face the imminent danger of displacement and cultural decline.

The history of the Isle de Jean Charles Tribe dates back to the early 1800s with the matrimony of Jean Marie Naquin, a Frenchman, and Pauline Verdin, a Native American woman. Condemned by his family for pursuing this interracial marriage, Naquin and Verdin settled on Isle de Jean Charles in order to start a life together. While the number of families populating the island grew over the course of the 19th century, it was not formally recognized until 1910 when the state proclaimed it “Isle á Jean Charles” (in Louisiana French).

Over the past two centuries, the Isle de Jean Charles band of Biloxi-Chitimacha-Choctaw Tribe has  ourished the development of their community infrastructure and education. A church was erected on the island in the 1940s that included a designated schoolroom for the island’s children. Until 1953, however, when a road was constructed to connect the island to the mainland, the Tribe’s youth lacked access to education beyond the elementary level. This road, the only route on and off the island that does not require the usage of a boat, has been battered by years of flooding and erosion. It was refurbished by the parish for the last time in 2011, although water damage has since resumed its siege against the renovations. The road often remains unnavigable on days when storms and other natural phenomenon catalyze intense flooding, leaving many residents worried that they will not be able to access hospitals and other critical amenities.

Since 2002, the Isle de Jean Charles Resettlement Project has made strides in facilitating the community members’ process of relocation to a safer region. In 2016, the U.S. Department of Housing and Urban Development awarded the Tribe $48 million in grant funds from the National Disaster Resilience Competition. This grant enabled the Tribe to develop a detailed resettlement proposal and a working relationship with the state of Louisiana in order to execute a successful relocation process and guarantee that the Isle de Jean Charles will remain preserved under the stewardship of the community. The grant was a major victory for the community and climate change refugees alike, as it represented tangible evidence that the government was beginning to recognize long-term threats that climate change refugees face, as well as their efforts to combat the resulting detrimental effects.

Yet, following the award of the grant and efforts to institute the Isle de Jean Charles Resettlement Project, the Tribe believes that the state is not respecting their rights and role within their partnership, nor adopting protocol that adheres to the proposal’s detailed instructions. In a press release from January 15, 2019, the Tribe publicly denounced the state’s abuse of power, stating that “state planners have steadily erased our role as leaders of the resettlement process, excluded our Tribal leadership from decision-making,” and “disregarded Tribal protocols during community engagement activities.” The state’s violation of the Tribe’s role as primary arbitrator in the Isle de Jean Charles Resettlement project threatens the Tribe’s sovereignty, right to self-determination, and successful integration into a new region.

The Tribe also faces the prospect of losing domain over Isle de Jean Charles once resettlement is implemented. Pat Forbes, the executive director of Louisiana’s Office of Community Development, responded to the notion of continuous Tribal autonomy over the island by saying that “it would be unheard of to allow the property to be anything but green space . . . public green space.” However, when the grant was awarded in 2016, Tribal stewardship over the island was a crucial component of the proposal.

The Isle de Jean Charles Band of Biloxi-Chitimacha-Choctaw Tribe have not stopped fighting for the  protection and prosperity of their community. They intend to nurture their new settlement with museums, gardens, and a Tribal community center that will unite members in shared cultural events and celebrations. Resettlement, if conducted properly and in a manner that respects the Tribe’s desires as stated in the grant proposal, also offers a chance at reunification: there is hope that the hundreds of Tribal members who have already left the island will reconnect on the Tribe’s new land and experience a rebirth of cultural tradition and communal solidarity.

All photos by Karen Apricot.