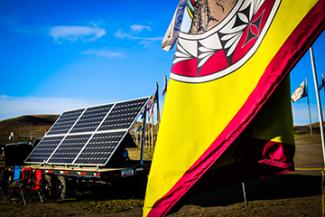 The land of the Standing Rock Sioux Tribe is a place of power; rolling hills juxtaposed with the wide open sky, revealing the quiet and beautiful strength of both. Through this land flows the Missouri River, the longest river in the northern part of Turtle Island, whose waters provide drinking water and life to the Tribe in a region with little other surface or groundwater available. Both the Tribe and the River have a long history of colonial impact. As recently as 1960 the Army Corps of Engineers, with the force of the Pick-Sloan Act, constructed the Oahe Dam along the Missouri River, just north of Pierre, South Dakota. This project was devastating, flooding over 55,000 acres of the Tribe’s land, submerging forests, towns, burial grounds, and the most fertile farmland, leaving the Tribe impoverished.

In spite of this history, the Standing Rock Sioux Tribe has remained strong in their determination to protect their homelands and build a resilient future, a strength they clearly demonstrated in 2016 when faced with a new threat—the Dakota Access Pipeline. This immense pipeline was slated to run directly through Tribal treaty lands, including underneath the Missouri River, threatening the health and integrity of the lands and waters. Fossil fuel transportation pipelines have a leak incidence rate of approximately 300 per year in the U.S., contaminating groundwater and surrounding soil. The Tribe immediately sued Energy Transfer Partners, the company building the Dakota Access Pipeline, for violating their right to Free, Prior and Informed Consent, and have continued to fight a powerful legal battle.

Standing Rock youth also took matters into their own hands, organizing spiritual runs to protect their lands and waters. In August 2016, they ran all the way from their homeland to Washington, D.C., 2,000 miles away, to deliver their message, beginning the Mní Wičóni (Water is Life) movement that has galvanized the nation. This profoundly historic movement has gathered thousands of interTribal supporters and allies together to protect the water and reject further fossil fuel development. The Water Protectors, conducting non-violent direct action centered in prayer, have been faced with militaristic, violent reactions from North Dakota law enforcement, which catapulted the story of the Water Protectors and the Standing Rock Sioux Tribe into the national and international spotlight. Thanks to the incredible sacrifices and hard work of the Tribe and their allies, the Mní Wičóni movement achieved a first small victory on December 4 when the Obama Administration denied the permit for the pipeline to drill under Lake Oahe.

The Tribe knows that the denial of the permit is not the end of the struggle; there are many ways that the pipeline could still be pushed through, particularly given the incoming Trump administration. They have been working with their allies to plan the next steps, including legal preparations, partnership building, and international outreach and education, as well as sustaining an on the ground small camp presence. In addition to this vital work of defense, the Standing Rock Sioux Tribe is carrying the fire lit by this movement into the creation of the Mní Wičóni Sustained Native Community, a new, culturally designed sustainable community. They know that it is critical to lead by example, demonstrating a future that honors the land, water, and our communities. The Mní Wičóni Sustained Native Community is designed to be a strong, just transition away from fossil fuels and to a way of life that is grounded in Native traditions and the needs of our collective future.

The vision for Mní Wičóni community initially began with the need to provide a safe winter camp for the Water Protectors on Tribal lands. Beginning in September, the Tribe reached out to the Indigenous Environmental Network and Blue Star Integrative Studio, a Native-owned architecture firm out of Oklahoma, to quickly design and build a model sustainable winter camp. This effort quickly gathered organizational partners and contributors who collaborated with the Tribe to produce an initial design by early December, preparing to begin construction in time to ensure safe shelter for the Water Protectors.

The subsequent permit denial on December 4 and the onset of winter weather opened a window of opportunity that is allowing the Tribe more time to develop and expand the vision of the project. The winter camp design has grown and adapted into the Mní Wičóni Sustained Native Community. This community will be a sacred place to recognize the history being made at Standing Rock, in honor of Standing Rock youth and the unification of Indigenous Nations around the world and those who support them; a place where the re-awakening of culture, language, and protocols can continue. It will also be a heritage site that will educate visitors on the pipeline and fossil fuel industry, along with culturally and spiritually responsible alternatives to fossil fuel. The Tribe have set aside 52 acres of Tribally owned trust lands for the community development, and have completed the geological, cultural, and hydrological surveys.

The design of the Mní Wičóni community utilizes traditional architectural techniques perfectly climate-adapted to the Great Plains, as well as contemporary natural buildings, featuring three Earth Lodges, two straw bale buildings, renewable energy systems, and ecological wastewater treatment systems. Construction support has been pouring in from partners and individual donors across the Nations that recognize the power of creating a beautiful model community on these historic lands. Energy and wastewater systems have been donated along with labor, time, love, and financial resources, including the support of neighboring Native Peoples who are sharing traditional construction knowledge.

The Standing Rock Sioux Tribe stated in their Vision 2030 Decree, “As Original Peoples of the Earth, we feel it is our duty to guide the world back into balance in a manner that provides for our life needs without destroying the source—Our Mother Earth. Our story will end unless we figure out a way to live harmoniously with the natural elements of the Universe. We seek to integrate systems that support our rights as Indigenous people on the planet—water, food, shelter, energy, and a sustainable form of economy.” This sustainable community project is an incredible example of the next generation of community building that cares for culture, land, water, and the climate: an example that can provide inspiration to other Tribes and intercultural communities across the country. The Tribe is now working with their design team and partners through the winter to finalize design and engineering details, and continuing to raise funds to match the remarkable donations they have already received. Construction of phase one begins as soon as the ground thaws in the spring!

—Dr. PennElys Droz (Anishinaabe) is the director of Sustainable Nations, a Native-led and staffed organization providing culturally based training, development, and consulting in renewable energy, natural/traditional building, and ecological wastewater treatment. She has worked in the Indigenous environmental field for 19 years and is also an author of works on Indigenous engineering methodologies for resilient, culturally powerful nation-building.

A gathering place honoring the wisdom of Lakota/ Dakota/Nakota lifeways, maintaining a balance of water, food, shelter, energy, and economy.

All photos courtesy of Sustainable Nations.