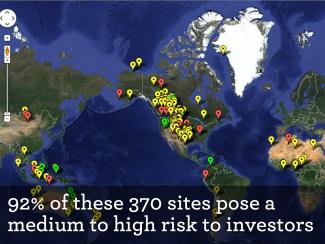 On October 29, First Peoples Worldwide released its Indigenous Rights Risk Report at the SRI Conference on Sustainable, Responsible, Impact Investing. The report analyzed 52 US-based extractive companies listed on the Russell 1000 Index to address one question: why should investors and shareholders care about Indigenous Peoples?

For years, Indigenous Peoples and their supporters have made the moral argument for their rights outlined in ILO Convention 169, the UN Declaration on the Rights of Indigenous Peoples, and the other international and national laws that followed. The Indigenous Rights Risk Report now makes the financial case for why investors, shareholders, and corporations must respect Indigenous Peoples’ rights and proactively work with them to maximize the benefits to Indigenous communities and minimize the financial risk to shareholders. First Peoples found that an alarming 92 percent of the 370 oil, gas, and mining sites analyzed posed a medium to high risk to shareholders. Of the companies with more than 10 sites operating on or near Indigenous land, 92 percent had at least one high-risk site, and 23 percent of the companies had more than five high-risk sites. The 21 sites with the highest overall risk rating shared three characteristics: 64 percent had a “critical” Community Risk rating, meaning the site was directly associated with violence towards and/or arrests of community members; 68 percent had a critical Reputation Risk rating, meaning they were receiving bad press in the local, national, or global media; and 64 percent were in countries with high or critical risk ratings, meaning the country provided little to no recognition or protection of Indigenous Peoples. Despite these risks, companies were found ill-prepared to productively engage and work with Indigenous Peoples.

The risks are only going to increase, as Indigenous Peoples have more rights enshrined at the international and national level and are exercising them more effectively than ever before. Increasingly, the world’s remaining oil, gas, and mineral reserves are being found on Indigenous land. Digital media is allowing Indigenous Peoples and their allies to access and share information more easily, giving them the ability to tell their stories and conduct advocacy campaigns on a global scale that can directly impact the profitability and value of a company.

View the full report at http://firstpeoples.org/indigenous-rights-risk-report.