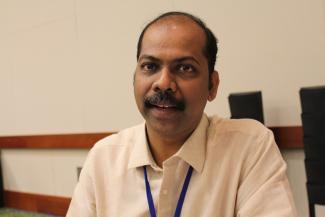 The Kerala Kani Community Welfare Trust is the result of an innovative partnership between a community of the Indigenous Kani people based in the Western Ghats, Kerala, and a private institute that extracted the medicinal qualities of the Arogyapacha plant (Trichopus zeylanicus) based on its local use for its anti-fatigue properties. A long process of phytochemical, ethno-pharmacological, and toxicological research by a local research institute led to the development of an herbal formulation for use in the production of a licensed herbal drug called Jeevani. Revenues from the license to manufacture the drug and royalties from its sale have been divided between the institute and the Kani community; these funds formed the basis of the trust, established in 1997, to oversee their reinvestment in community welfare projects.

APK: “This award gives global acceptance to our work because it is recognized all over the world. Whenever we go to any forum and say we are from Kani community, we are accepted. The award was given for our work in developing a medicinal product using local genetic resources and traditional knowledge. Our Trust has worked with the scientific community in sharing our traditional knowledge. My community, which is in the hilltops of the Western Ghats, is one of the richest biodiversity hot spots selected by UNESCO and honored around the world. Given where we are, our traditional knowledge on the medicine of these lands is very high.

In the late 1980s, Dr. Pushpangadan, a scientist from the Regional Association Laboratory Jammu, and his team, were introduced to a miraculous plant which is called the Trichopus zeylanicus. This plant is endemic to this area; it is not even seen in another part of Kerala. It can be used for many things, but primarily for anti-fatigue purposes. The scientific community developed a drug called Jeevani, which is marketed all around the world. The benefit of the earnings arising from that product has been shared with the community. This is a first example of access and benefit sharing; I can say that it is one of the first of its kind in India and probably in the world.

Before the 1980s, [traditional healing] was not that popular among our people. But after this Equator Prize I believe that all over the world there was a recap of these traditional knowledges. Now we have so much demand that our people are being called by other local communities and other peoples from outside of Kerala, even from other states. They are reaching out to them for treatments. I want to say that this traditional knowledge is something we should really look into because each community—in India, or U.S., or Africa—each of these Indigenous communities may have knowledge based on the local knowledge. That will be the best knowledge. It can be used for the betterment of humanity.”