Enabling Women to Live the Life They Choose: Women’s Work 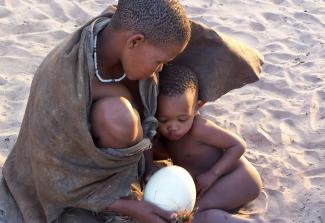 For the San Bushmen, the ostrich egg is a gift from the gods. Not only does the inside of the egg feed a family, the outside can be used as a water vessel. An obvious sign of fertility and prosperity, an eggshell made into beads and given to a friend is a wish for good luck. As the very first bead humans ever made, dating back over 50,000 years, and with the San as the last to be making them as part of their tradition, the craft of ostrich eggshell beading preserves not only their tradition, but all of ours. At one time the women used eggs gathered in the wild, although that is no longer the case. Today ostrich eggshells are sustainably harvested from ostrich farms, making the jewelry an environmentally friendly product.

Cecilia Dinio Durkin didn’t know any of this when she set out for the Kalahari Desert in Botswana in 2003. At the time she was a journalist living with her family in the big city, Gaborone, and the story she was writing about the Kuru Family of Organizations (a nonprofit advocate for the Bushmen in Namibia, South Africa, and Botswana) was just another assignment.

Every three months the nonprofit would make its rounds to the various remote villages, buying crafts to be sold in its gift shop in Ghanzi and to some retail venues in Africa, Europe, Asia, and North America. The San women who participated in the project would anticipate the arrival of the buyers and prepare jewelry and other crafts in order to earn money to pay for their children’s school expenses, or for fresh meat and milk.

Durkin was inspired by the women she met on that trip and taken by the beautiful handcrafted jewelry. Upon learning that a single bracelet, once sold, would feed a family for a month, she decided she would do what she could to sell them. In 2006, she and her family reluctantly moved back to Poughkeepsie, New York, where she opened a store called Women’s Work. Durkin believed that a retail outlet would be the best way to provide sustainable income for the San women she met in Botswana.

The 2012 CS Bazaar series raised over $477,348 for Indigenous artisans and their communities. Find a Bazaar near you! Visit: bazaar.culturalsurvival.org