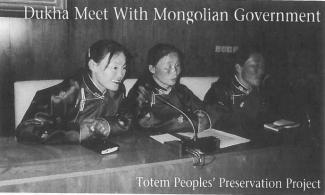 A delegation of six Dukha (Tuvan) reindeer herders met in June with Mongolian government officials in Ulan Bator to speak about their culture and the challenges their people face for survival. It was the first time a group of Dukha had ever met with the Mongolian government.

“What you have done, no one else has ever accomplished in the history of Mongolia,” said Radnaa Yenchev, Mongolian government affairs coordinator for Taiga Nature and the Totem Peoples‘ Preservation Project. “Never before has an outside non-government organization been permitted to lead representative meetings of an ethnic minority before our government. Not even such organizations within our own country. The Dukha delegation effort spearheaded by the Totem Project over these past two years has today opened the door for all 16 of Mongolia’s ethnic minorities.”

The delegation outlined their peoples’ priority issues, challenges, and needs: Further cooperation on the health and longevity of the reindeer herd for the benefit of the Dukha traditional peoples living nomadically in the taiga.

- Agreement to explore the possibility of twice-annual open-border policies with Tyva and Buryatia in Russia to allow related reindeer-herding peoples and split families to meet and fully cooperate on social, cultural, economic, and livestock issues.

- Full health checks free of charge for the reindeer herder delegation. These were completed at State Hospital No. 3 and were fully paid for by the Mongolian government. - More assistance under the United Nations Development Program and other state and international funding for local small-business development such as the craft cooperative that was originally created with the help of the Totem Project.

- Dialogue on issues of concern including self-representation, advancement of Tyvan language training, and sustainable tourism policies.

Beginning in March and continuing through July, the Totem Project successfully concluded herder training for veterinary specialists among the Dukha and Darhad peoples and delivered over $2,000 worth of veterinary medicines and equipment, as well as tools needed to advance their interest in antler craft development for needed supplemental income.

The Totem Project must now advance on the momentum of the Dukha delegation’s success and seek financial support:

- $9,000 to complete the budget for the project’s third international exchange between the Adirondacks and the Buryat Republic of Russia (in the Lake Baikal Region and with the cooperation of Mohawk, American, Buryat, Soyot, Evenk, and Russian peoples).

-$3,000 for additional medicines, tools, and training for reindeer herders in Tyva, Russia, and for the Dukha of Mongolia

-$1,000 for completing the Buryat publication promoting their most noted high lama and the Native Buryat teachings of Hambo Lama Itigelov

-$3,000 for investment in the Tsaching Reindeer Cooperative of Mongolia, established with help from the Totem Project to reduce the cutting of blood, or velvet, reindeer antlers and to promote the alternative use of hard natural fallen antlers for sustainable craft development.

If you can help, please send your donation to the Totem Project, c/o Cultural Survival, 215 Prospect Street, Cambridge, MA 02139.

For more information contact: Daniel Plumley, Totem Project coordinator, by telephone at (518) 576-4430 or by e-mail at drpadk@aol.com. Tara Tidwell is managing editor of the CSQ.

27-3 Models of Sovereignty and Survival In Alaska