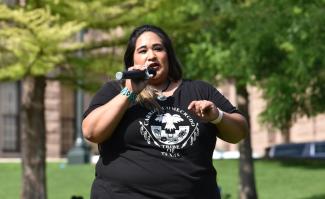 Christa Mancias (Esto’k Gna) divides her childhood memories into two distinct categories: the lies and misinformation about her heritage taught to her in school, and the truth that gives her so much pride today. Growing up in Lubbock, Texas, Mancias remembers the harm she experienced learning about the history of her people in school history textbooks. “We were taught the typical cowboys and Indians story, what you saw on TV. We were always scouts and didn’t know much of anything. We just knew the land and they used us.” And the most bitter of the lies told to students: “I was told I was Mexican because I’m brown, [that] there are no Indians because they all died.” But Mancias’ family knew better. “I know who my people are, I know where I come from,” she says.

At 38 years old, Mancias is the Tribal secretary of the Carrizo Comecrudo Tribe of South Texas, a position that allows her to play a visible leadership role in uplifting the history and culture of her Tribe. A mother of three and strongly connected to her ancestors, Mancias is on the precipice of eventually becoming the chair of her Tribe and leading a renewed charge to save her community, maintain the health of the land they live on, and ensure that the Tribe’s legacy is handed down to future generations.


Proud to Be Indigenous
The Carrizo Comecrudo Tribe of South Texas (Esto’k Gna) dates their history back to time immemorial. Spanish colonists named the Tribes living in the area surrounding the 1,800-mile Rio Grande Delta. The word carrizo in Spanish means “reed” or “cane,” and was ascribed to several Tribes in the area who built their houses out of reeds. Comecrudo means, “those who eat raw,” an observation the colonists made around the half-cooked meats the Tribes consumed.

Despite Spanish imperialism, years of forced conversion to Christianity through slavery, rampant disease outbreaks, and the genocidal intentions of innumerable European settlers, the Esto’k Gna were able to maintain their culture and language throughout the centuries. Coahuiltecan is a term used by the Spanish to describe the myriad Tribes inhabiting southern Texas.


Like all racist labels, the term did an injustice not only to the Esto’k Gna, but every other Tribe living in the area. “It’s not an accurate term because we all have different identities and languages,” says Mancias.Currently the Tribe has between 2,000 to 2,500 members. They are not recognized by either the State of Texas or the federal government, which in effect invisibilizes their culture, heritage, and right to self-determination.

Oil, Gas, and Sacred Sites
The Devil’s River winds roughly 94 miles southwest along the Texas-Mexico border. In 1801, Spanish settlers entered a Carrizo village along the river and murdered more than 300 people, raping the women, pillaging houses, and burying the bodies in a mass grave. At 11 years old, Manuel Cavazos was the sole survivor of the massacre, having played dead with a spear in his back. Years later, he would recount watching the disembowelment of his pregnant sister and the screams of some villagers and family members as they were burned alive.

When Mancias and her younger brother, Pablo, were children, their parents made it a priority to pass down their oral histories and culture. This included visiting the site of the massacre at Devil’s River and learning the harrowing story of Mancias’ great-great-great grandfather, Manuel. As an adult, Mancias can no longer visit the site as oil and gas companies have purchased the land and completely blocked it off from the public.

Recently, the Tribe learned that Valero, a San Antonio-based Fortune 500 oil and gas producer, has built a pipeline running through an ancient burial site with remains dating as far back as 800 B.C.E. “We’ve been fighting oil and gas for a long time,” Mancias says. “A lot of these areas where they’re fracking, tearing up the land, putting in pipelines, they are sacred sites that are thousands of years old that have ties to the people. We’re talking about not just one village, but many villages that have a vast history of life prior to first contact 500-plus years ago. The land has a history of people there, but they want to destroy it to make liquid natural gas terminals.” 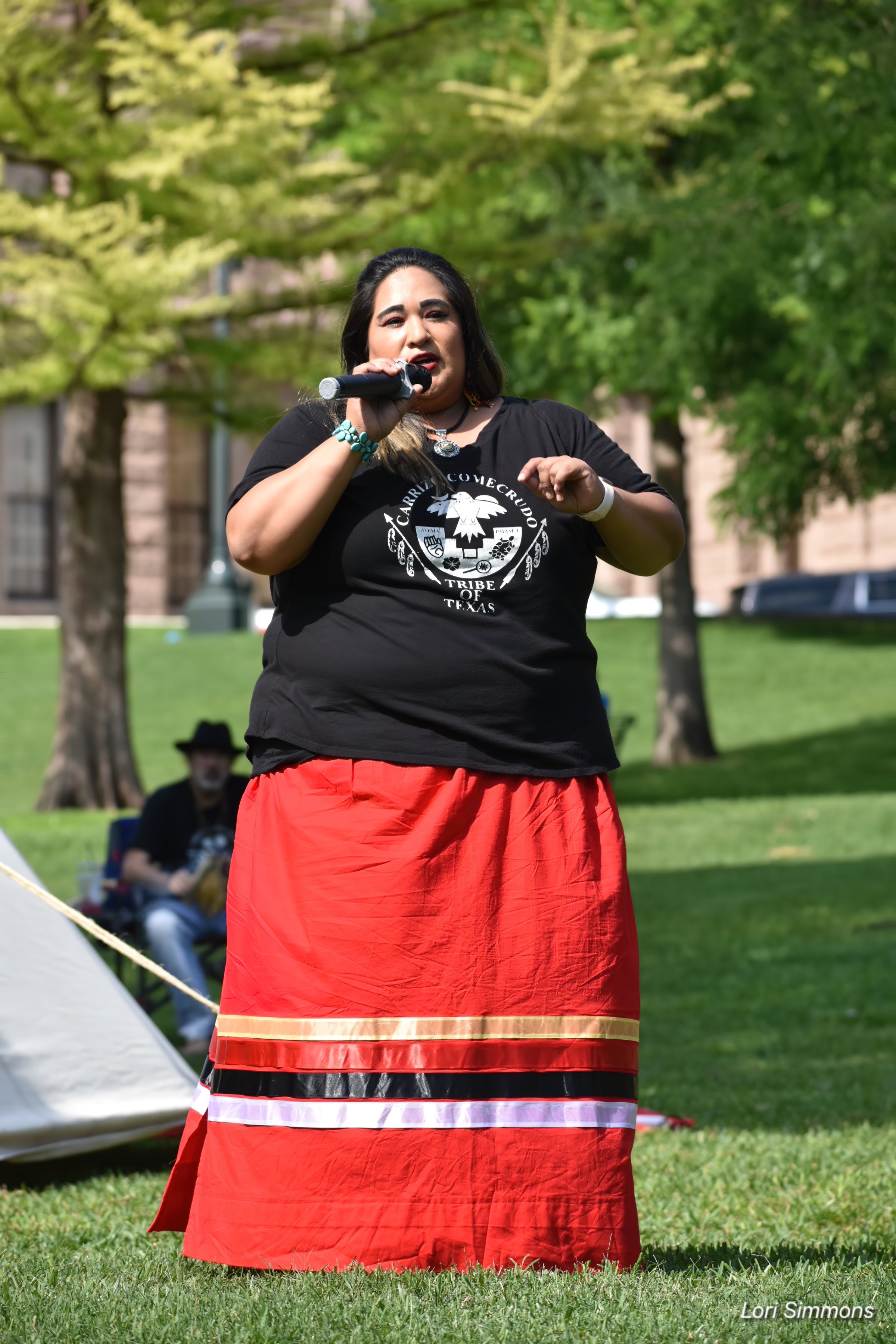 Fracking Fight
In 2019, the Tribe took the Trump administration to court for building a border wall through a local cemetery in San Juan, Texas. Now, Tribal members are locked in another battle with Texas LNG, a Houston-based liquid natural gas company. In 2015, the firm publicly announced plans to build three LNG terminals and pipelines in south Texas.

The Garcia Pasture is a site where the Esto’k Gna have practiced their lifeways for generations, right outside of Brownsville, Texas. In 1972, it was added to the National Register of Historic Places. Today, if you were to walk through the pasture, you’d see Texas LNG towers in the distance. “They’re building fracking pads and oil wells through our history, through our grave sites, and no one is saying anything,” Mancias says of the terminal production.

The invasion of the LNG terminals isn’t solely about cultural preservation; it’s also about the right to live in a clean environment. While natural gas is described as the “cleanest” fossil fuel, its impacts on the environment are deadly. When natural gas is siphoned from the ground, it is cooled to –260°F, at which point it becomes liquid and its volume reduces dramatically. After being transported via terminals, it is then warmed, converted back into a gaseous form, and delivered to businesses and residences.


The processes of converting the gas to liquid form and back again and transporting the liquid can lead to the excretion of large amounts of methane, which contributes to global warming. Methane is 84 times more potent than carbon dioxide in terms of its environmental impact. LNG facilities can also disrupt local ecosystems, killing off entire species of plants and animals. Reduced air quality, earthquake-like events, increased cancer risks, and water and soil pollution are all potential impacts of these projects.


The Tribe has spent the last five years publicly impeding the production of LNG terminals and other projects that damage the environment. However, these efforts have been met with strong resistance. In 2019, Texas Governor Greg Abbott signed a bill into law that would punish any individual interfering with “critical infrastructure” projects with between six months and two years in prison and a potential $10,000 fine, a significant win for oil and gas companies seeking to criminalize protests against extractive projects like fracking and LNG terminal production.


The lack of federal and state recognition of the Esto’k Gna has made their advocacy efforts an uphill battle. As a Tribal co-chair, Mancias and her father have played leading roles in calling attention to the hazards caused by Texas LNG projects. In May of 2020, she helped co-host a two-day tribunal bringing together members of the Tribe, environmental justice experts, and allies to officially document the impacts of the Texas LNG projects. Over the last several months, Mancias also co-hosted several monthly panel discussions where she spoke about what’s at stake for the Tribe if Texas LNG’s projects continue.


Mancias is committed to drawing public attention to the impacts of the LNG terminals, highlighting in particular how Texas LNG cares very little about the lands it’s invading. “They’re not doing their due diligence of knowing the history of the land,” she says. “They just want our dollars.”

The movement is growing. More and more Tribal members and area residents are getting involved, making their voices heard about the colonization of Tribal lands and the detrimental health impacts of LNG projects. “People are waking up and understanding who they are and trying to stand up for themselves and their future generations. That’s the fight that we continue now: it’s not about us now, it’s about them later. We want to make sure our history and culture is preserved for the next generation. We are standing up and protecting our ancestors and those who have come before us. Is the money worth the land we should be giving to future generations? My life is worth dying for so that my people can continue to live,” Mancias says.


Paramount to those who come after her are her children. Mancias is fighting for a world where her children aren’t taught harmful and demoralizing narratives about Indigenous people. “I want them to live in a society where they are not afraid to be who they are. When they go to school and learn about Native people, they get the truth. That comes from stopping these pipelines so that the state recognizes that there are sacred sites that deserve to be preserved.”

— Michael Givens is the associate director of strategic communications for the Unitarian Universalist Service Committee. He has spent the last 13 years working in the social justice movement and holds a master’s degree in Investigative Journalism.