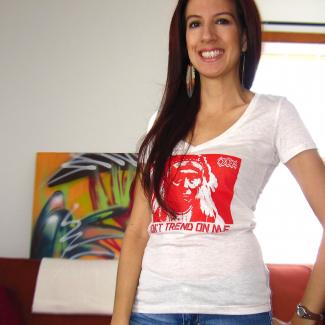 When Dr. Jessica R. Metcalfe (Turtle Mountain Chippewa) wears one of the most prized pieces in her wardrobe, a scarlet cape intricately embroidered with white feathers by Tracy Toulouse (Ojibwe), she stands up a little straighter. To don such a piece, she says, one must “live up to the cape…it is a huge statement piece, you have to be as strong and as beautiful as that cape.” The power of Native American fashion is contained within thousands of years of history, culture, traditions, and technologies, woven into each object crafted by Native American designers. These objects move beyond adornment and are powerful testaments to the resilience and vibrancy of over 500 North American Tribal Nations thriving today.

Metcalfe is the owner of the blog and online boutique Beyond Buckskin, a digital space dedicated to Native fashion. The dynamic lens of contemporary Native fashion allows her to engage large audiences in critical dialogues about the diversity and humanity of Native American people, breaking the norms of an industry where cultural appropriation and racist stereotypes are the status quo.

Metcalfe, an artist herself, grew up painting and drawing in her Native community in North Dakota and earned a degree in Native American Studies from Dartmouth College. But it wasn’t until selecting a topic for her master’s thesis at the University of Arizona that she was turned on to Native fashion, and more specifically, to the work of two distinctive designers: Margaret Roach Wheeler (Chickasaw) and Pam Baker (Squamish/Coast Salish). She explored how these designers communicated traditional values such as status and clan association through their wearable art, and when it was time to tackle her doctoral dissertation, Metcalfe took her examination of Native fashion even deeper by deconstructing European concepts of fashion theory and countering them with a uniquely Native perspective. She describes the ultimate goal of her dissertation, which focused on Southwestern Native designers and markets, as being “to provide the only comprehensive critical scholarship on contemporary Native American fashion design.”

During her dissertation research, friends and colleagues entrusted Metcalfe with family photographs depicting Native adornment of past generations with an unspoken understanding that she would share the images and stories. The resulting blog, Beyond Buckskin, allowed Metcalfe to share her research on Native fashion designers within the fashion industry in a more immediate way and with a broader audience. Beyond Buckskin unquestionably fills a void: it is the main source of public education about Native American designers whose voices are often excluded from mainstream fashion. Just as crucial, the blog offers a critique of the fashion industry’s perpetuation of damaging stereotypes, including its continual appropriation of Native American cultures. “As Native Americans, we have no mainstream representation, so when the fashion industry perpetuates stereotypes and is apathetic to the blatant theft of our intellectual property for profit by non-Native designers, there is a profound negative impact,” she says.

The creative innovations of Native Designers are frequently excluded in favor of the non-Native vision of “tribal,” defined by a gross misuse of sacred regalia and cheap bargain-bin knockoffs of Native design. Notable examples include the recent headdress and leopard bikini ensemble modeled by Karlie Kloss on the Victoria’s Secret runway, and Jeremy Scott’s collection for Adidas which appropriated Northwest Coast totem pole designs in a tacky and distasteful way. Perhaps most egregiously, In Navajo Nation v. Urban Outfitters, Urban Outfitters was found to have infringed upon the Navajo Nation’s trademark “Navajo” when it labeled a collection of underwear and flasks with style names that included “Navajo.” Metcalfe cautions that stereotypes in fashion are not to be taken lightly. As she notes, “Fashion has the power to be highly damaging. When I see Urban Outfitters completely disregarding the Navajo Nation’s claim to their own name, that is a power move.”

The Beyond Buckskin Blog supports the movement to reclaim Native Americans’ visual heritage and property. When Metcalfe pushes back against cultural appropriation, she makes fashion headlines. Take the case of Paul Frank: when the junior-focused, ready-to-wear brand threw a “fashion night out” party, it did so by featuring neon, Indianthemed clothing and decor with Disney starlets yielding tomahawks and posing in war paint and feathers. Metcalfe posted a photo of the party to the Beyond Buckskin Facebook page, and outrage ensued. The Native American online community and many other allies used social networking to articulate their anger, frustration, and disappointment at the Paul Frank event. Along with Adrienne Keene, author of the popular blog Native Appropriations, she also posted a public letter demanding an apology and suggesting that the company atone for its racist actions by engaging with and supporting Native arts and culture organizations. The Native American online community and its allies mobilized with such energy that the company issued an apology and announced that it would take a series of positive steps. This included inviting Metcalfe to visit the headquarters to recommend Native American designers to start a new collection, proceeds from which will be donated to a Native organization. Metcalfe has blogged about the success of the Paul Frank campaign, stating that “The Paul Frank case is shaping up to be a great example of how to apologize, listen, come up with solutions and creative ideas, learn, pass on that new knowledge to others, and move forward.”

The Beyond Buckskin Boutique celebrates its one year anniversary this May, and its first year has already been filled with many successes. While the blog teaches the public why cultural appropriation is wrong, the boutique introduces fashion created by Native American fashion designers and steers buyers away from non-Native, appropriated products. The boutique also offers a unique online shopping experience by functioning as an online museum. All products for sale are enriched with links to the designer’s profile, along with stories about the item’s cultural, social, and political context. Shoppers not only leave with Native American-made designs, but also with an added understanding of their purchase. One of Metcalfe’s favorite examples of this are the top-selling “Chippewow Blossoms” earrings by designer MaRia Bird. Bird’s company, Mea B’Fly Designs, creates colorful, graphic earrings combining Native history with vibrant patterns. When the shopper reads the full description of the earrings, she gets a history lesson about the floral beadwork created by Chippewa women for the last several hundred years.

The Beyond Buckskin Boutique is unique in bringing designers together as allies. Metcalfe explains: “The conventional fashion industry is one of the most elitist industries around, and it takes a lot of money and resources to get noticed.” Rather than viewing each other as competitors, the Beyond Buckskin artists find a welcoming, supportive community where every new artist, blog post, and media headline drives more traffic to the site, benefitting all. Metcalfe plans to add more designers, creating a second, all-Native produced lookbook showcasing Beyond Buckskin products within a fashion editorial layout, and adding print and video documentation of Beyond Buckskin content so that fans 50 years from now will have access to a complete Beyond Buckskin archive. Her future plans also involve high profile fashion shows, seed grants for Native American designers, and breaking into the international market.

Metcalfe is one of those rare individuals who unites many under one mission, and there is no doubt that she will succeed. As she says, “the voice of many is more powerful than the voice of one. This same philosophy has allowed our Native communities to survive genocide and remain strong, and through Beyond Buckskin, it will allow our Native Designers to flourish as cultural ambassadors for our people.”