Decolonizing the Person, the Image, and the Collective Global Psyche Through the Lens of Silvia Rivera Cusicanqui 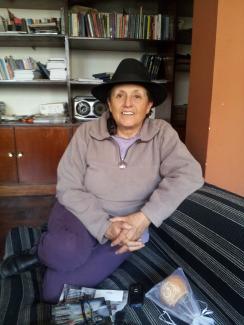 For many mestizo people of mixed Spanish and Indigenous blood from South America, identification with their native heritage has been difficult to imagine, let alone realize. Silvia Rivera Cusicanqui, a renowned sociologist from La Paz, Bolivia, has made this quest for identity her life’s work. For Cusicanqui, the “uneasiness” (her term) that inspired her to recover her  Indigenous roots began with the decision to learn her mother’s language, Aymara; it had been her father’s native language, Quechua, that was spoken at home. According to those working to maintain endangered languages, language is a central feature of human identity. For many, not knowing a language is ostracizing because you can’t fully be yourself.

When asked how she self-identifies now, Cusicanqui says she claims a few drops of Aymara blood as her own. Although she has degrees in sociology and a master’s in anthropology from Catholic University in Lima, she rejects the institutional and colonial legacy of her European heritage: “I self-identify as a mestiza Aymara woman who fervently vindicates her Indigenous Aymara side. This has inspired me to learn the language. It allows me to be more coherent and holistic regarding my Aymara background. I do not negate my mestiza existence, yet . . . I will not deny my Indigenous roots. We participate in rituals that recuperate our relationship with the land, learn our language, and dialogue with the Andean spiritual world. We thank the land. In this way we are less vulnerable to the alienation and loss of our identity.”

Beyond the fundamental tenet of personal freedom as a right of all peoples, Cusicanqui has dedicated her life to investigating the relationships among gender, ethnicity, politics, economics, and the sociology of oppression and resistance in Bolivia. She is fascinated by the internalization of the colonization experience and how it drives the actions of its subjects. She contends that the mental conditioning that takes place as we interpret the visual images around us often unconsciously reinforces forms of discrimination and perpetuates the oppressive social order, prompting the need to disempower them.

Cusicanqui’s research also explores the myriad aspects of colonization, what Indian scholar Ashish Nandy calls “the internal/intimate enemy.” Unlike many theorists in the field of colonial studies, she investigates not only the psychological colonization of the vanquished native peoples, but also the unwitting collusion between the oppressive structure and racist framework permeating the mestizo psyche. “The internal enemy—colonization—is within us all, from elites to the oppressed,” she says. Working to dismantle the internalization of imperialism, she is a pioneer among South American feminists working from the vantage point of the South and her ancestors’ native culture.

Finding the Indian Within
In 1926 the Peruvian scholar Jose Mariategui published Seven Interpretive Essays on Peruvian Reality, considered by many to be the groundbreaking study of Latin American reality from a Marxist-Leninist perspective. In his work, Mariategui included a definitive chapter on the “Indian Problem,” which was informed by empirical and census data of the era. In a critical rebuttal, Cusicanqui points out the likelihood of data manipulation— distorting the numbers to create the effect of an ethnic group’s cultural genocide. Rather than attempt to reconcile an “Indian problem,” she calls on people to redefine the term. “I am not interested in discovering what it is to be Indian,” she says. “I already am, and have been for many years. Consequently for me, this nation [Bolivia] belongs to everyone, male and female, all people, but particularly for those who know how to appreciate this, rather than considering it as a problem solved by dispersing a few Indians here and there as token objects.” Further, she says, “Decolonization is for each mestizo to resolutely undertake. Everyone who has an Indian within should ultimately be the first one to decolonize. Focus on yourself, for that is interculturality.”

Cusicanqui refuses to be pigeonholed; she shies away from labels other than “anarchist,” “sociologist,” “alternative knowledge producer,” and “social activist.” Talking about the challenges facing Indigenous Peoples, she says, “I do not propose solutions; I perform diagnostics . . . to see how colonization is manifested and continues to perpetuate.” Among her scholarly work are books on Indigenous women’s exploitation in the labor market and by the banking sector through microloans; a collection of oral histories available online through
Taller de Historia Oral Andina, a workshop on Andean Oral History; an examination of the epistemological violence unleashed against, and self-inflicted by, Indigenous people; a history of the longstanding Indigenous resistance movement in Bolivia; and her current work on the sociology of the image that takes her around the globe to lecture.

At home in La Paz, she is involved in her latest project at Tambo Colectivo 2, a holistic center for research and production of alternative knowledge on the decolonization of the body, sociology of the image, and social activism. Having tired of working exclusively in the theoretical realm, Cusicanqui formed a social collective with 16 other social scientists in La Paz to live based on the principles of Indigenous cultures and alternative knowledge producers. The group implements urban agricultural production, champions Indigenous practices, traditions, and rituals, and is working to revitalize Bolivian Native people’s languages.

The collective is additionally committed to raising consciousness about the harmful effects of the cosmetics industry, including the marketing of deodorant and other products that promote images of women as dirty, needing to beautify or cleanse themselves from their natural state of being. In the field of ecological activism, the group attends fairs in La Paz selling products that are eco-friendly and healthy. Fighting against environmental degradation, they began a campaign to eliminate the use of plastic bags in La Paz and have woven thousands of recycled bags into room dividers at their center.

Cusicanqui sees capitalism and consumerism as the modern chains of oppression, and hopes to be a catalyst for decolonizing and liberating people from these systems’ domination. As such she recognizes the urgent need for Indigenous Peoples to recover their own form of thought—not one that has been distorted by Western imperialism and hegemony— and to activate that “cosmovision” and knowledge system in order to affect change. Ultimately, though, she knows that Indigenous Peoples must articulate this vision for themselves: from their own perspective, based on their own beliefs, and out of knowledge produced by their own hands and minds.

—Isabel Dulfano is an associate professor of Spanish at the University of Utah. She is writing a book, I/We: Wo(man) of (An)Other Way, on Indigenous alternative knowledge producers and anti-globalization counter-hegemonic public intellectuals from Latin America.

For more information on recent publications by members of Tambo Colectivo 2, see Elcolectivo2.blogspot.com.