Yuki Kihara is a global sensation. “Paradise Camp,” the Sāmoan-Japanese artist’s latest exhibition, premiered to critical acclaim as New Zealand’s representation for this year’s Venice Biennale. Her outspokenness as an Indigenous Pasifika artist and Fa’afafine, which translates to “in the manner of a woman,” defining Sāmoa’s third gender, underscores the significance of this moment in time.

Kihara’s interdisciplinary creative practice, often provocative, frequently piercing, and at times playful, at once confronts, engages, and deconstructs themes of gender and colonization in a career spanning over 20 years of such output. Her works tour widely and are included in permanent collections of major institutions such as the British Museum, Nationaal Museum van Wereldculturen in Amsterdam, Kaohsiung Museum of Fine Arts in Taiwan, Te Papa Tongarewa Museum of New Zealand, and many others. Cristina Verán recently spoke with Kihara.

Cristina Verán: Tell us a bit about your arts background.
Yuki Kihara: I’m formally trained as a fashion designer and have worked in multiple roles in the fashion, publishing, performing arts, TV, and film industries, in front of and behind the camera. These experiences inform my art practice; one centered in a research-based approach that challenges the dominant, singular historical narratives through a wide range of mediums, including performance, sculpture, video, photography, and curatorial practice.

CV: How did you, as someone Indigenous to and living in Sāmoa, end up representing Aotearoa New Zealand in the 2022 Venice Biennale?
YK: I’m a dual citizen, an identity steeped in diplomatic ties from when Sāmoa was under New Zealand colonial administration. Though currently in Auckland, I’ve been living and working in Sāmoa over the past 11 years— specifically Mount Vaea, Upolu Island. Ancestrally speaking, my Sāmoan family is from the villages of Lauli’i on Tutuila Island and Fitiuta on Ta’ū Island, both of which are part of American Sāmoa. My father is from Ōsaka, Japan. My proposal for “Paradise Camp,” made together with curator Natalie King, was one of 13 submitted to the Arts Council of New Zealand, also known [in Māori] as Toi Aotearoa. It was unanimously selected by a jury of arts professionals to represent the New Zealand’s Pavilion. 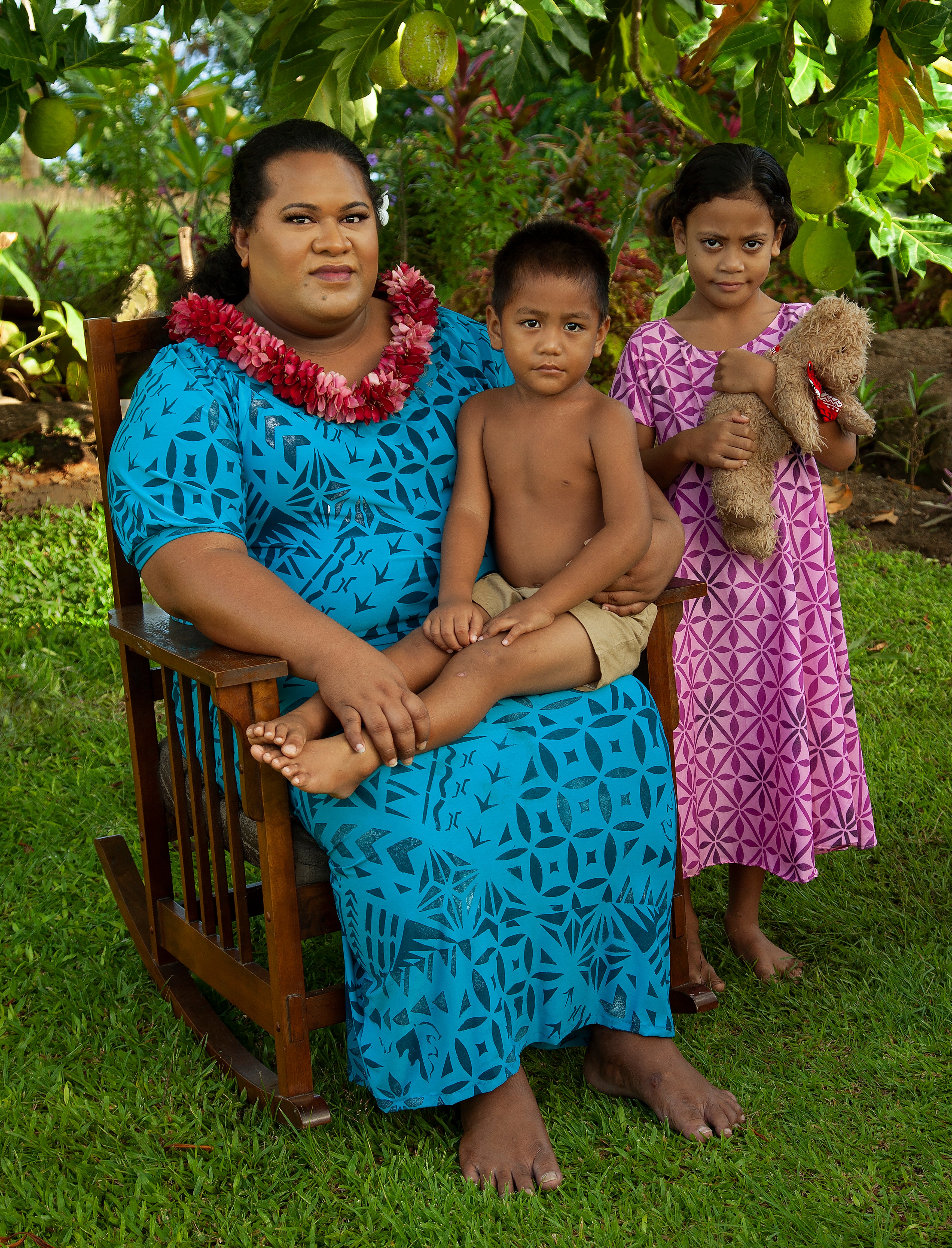 CV: Describe the genealogy of ideas and aesthetic choices put forth in “Paradise Camp.”
YK: This project began from my initial encounter with French artist Paul Gauguin’s paintings at the Metropolitan Museum of Art in New York, coinciding with the occasion of my solo exhibition there, “Living Photographs,” in 2008. Prior to this, I’d only seen his images in the form of souvenirs. I recalled an essay written by [Māori] Professor Emerita Ngahuia Te Awekotuku, which discussed the models of Gauguin paintings as being Māhū; the Tahitian third gender.

These figures reminded me of my Fa’afafine friends, as the landscapes also reminded me of home. I would later discover that Gauguin had actually used photographs of people and places in Sāmoa as inspiration to produce some of his paintings about Tahiti and the Marquesas representing his ‘paradise on earth,’ and I found a few of these, taken by New Zealand colonial photographer Thomas Andrew, included in Gauguin’s “Noa Noa” journal. He’d probably collected them without any care for where they actually came from or who the people were in the photos, so long as they fit into his imagination of the “primitive.” “Paradise Camp” was made with the Fa’afafine audience in mind, as that is who I want to empower with my work. In order to disrupt Gauguin’s heteronormative view of paradise, I chose to deploy an exaggerated, camp aesthetic, showing paradise instead from a Fa’afafine perspective. This re-directing of his paintings toward their original inspiration became a process of reclaiming the narrative. 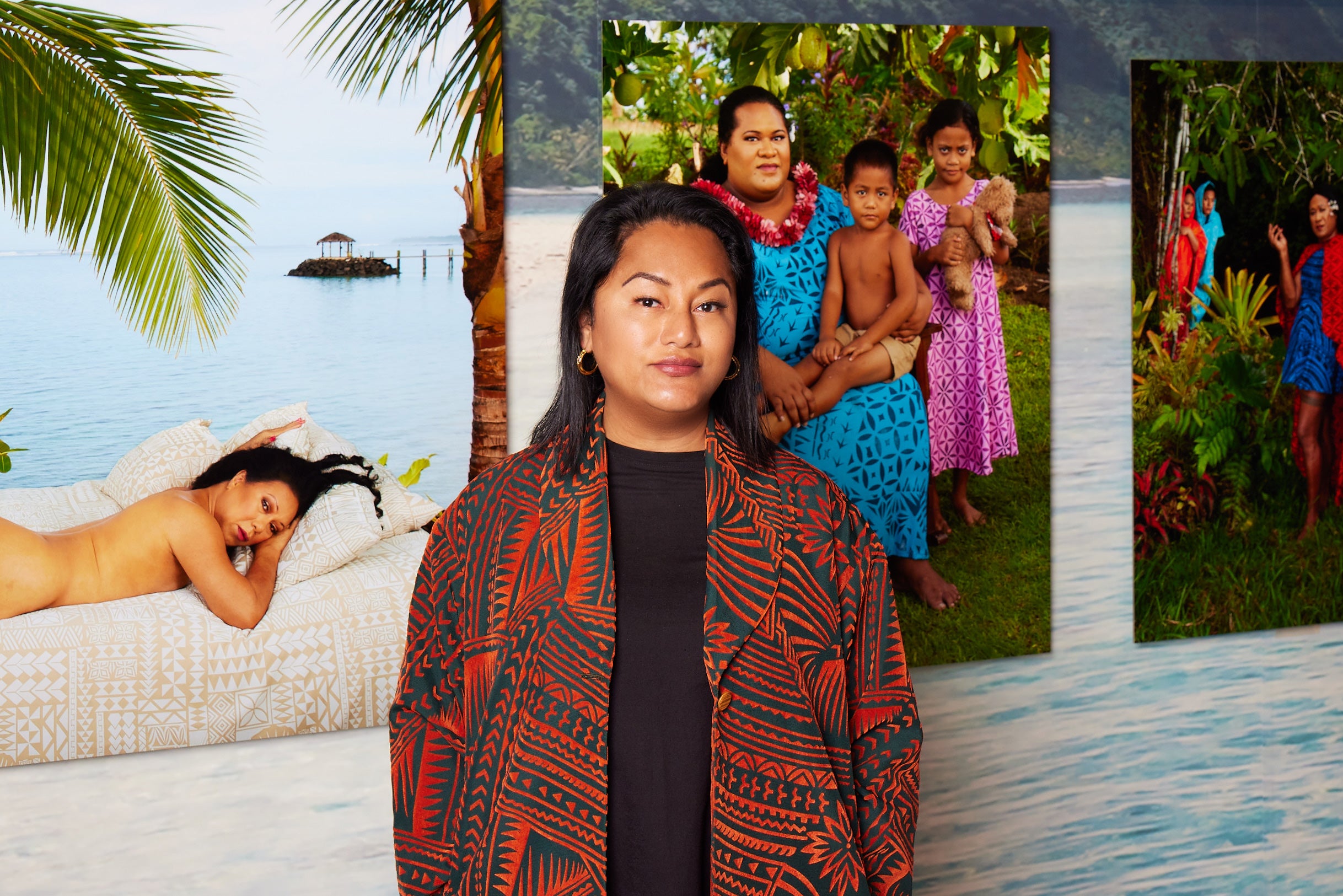 Yuki Kihara at the New Zealand Pavilion at the 2022 Venice Biennale. Photo by Luke Walker.

CV: How does the conceptualization of paradise by European colonizers imposed on the Pacific compare with Pasifika ideas of the region? And what counternarratives are of interest to you?
YK: In his 1993 essay “Our Sea of Islands,” the late Tongan philosopher Epeli Hau’ofa wrote: ‘Continental men, namely Europeans, on entering the Pacific after crossing huge expanses of ocean, introduced the view of ‘islands in a far sea.’ From this perspective the islands are tiny, isolated dots in a vast ocean. Later on [they] drew imaginary lines across the sea, making the colonial boundaries that confined ocean Peoples to tiny spaces for the first time. Today, these boundaries define the island states and territories of the Pacific.’ I wanted to extend this idea of ‘colonial boundaries’ to the popular understanding of paradise—essentially binary and heteronormative, as derived from Adam and Eve in the Garden of Eden—to include how we in the Pacific see gender and sexuality, which is like a pie chart with various shades of grey.

CV: How would you characterize the historical impact of colonially introduced notions and legal codes on Sāmoa, and how has your work responded to them?
YK: Going back to the eve of our Sāmoan Independence,the New Zealand colonial administration had introduced laws as part of the Crime Ordinance Act of 1960, which were against homosexuality and directly targeted the Fa’afafine community. It led to the persecution of any “males impersonating women” in public spaces, and anyone caught committing such ‘offenses’ was fined and imprisoned for up to six months. The idea behind it all was that, in order for Sāmoa to become independent, it had to be heteronormative. Fa’afafine were therefore considered a hindrance to Sāmoa’s Independence. Sixty-two years after that anti-Fa’afafine law was imposed in Sāmoa by New Zealand, I produced “Paradise Camp” using New Zealand taxpayer funds and featuring Fa’afafine models. I see this gesture as a form of restitution of colonial violence against our former colonizer, to disrupt the continuing neo-colonial order. 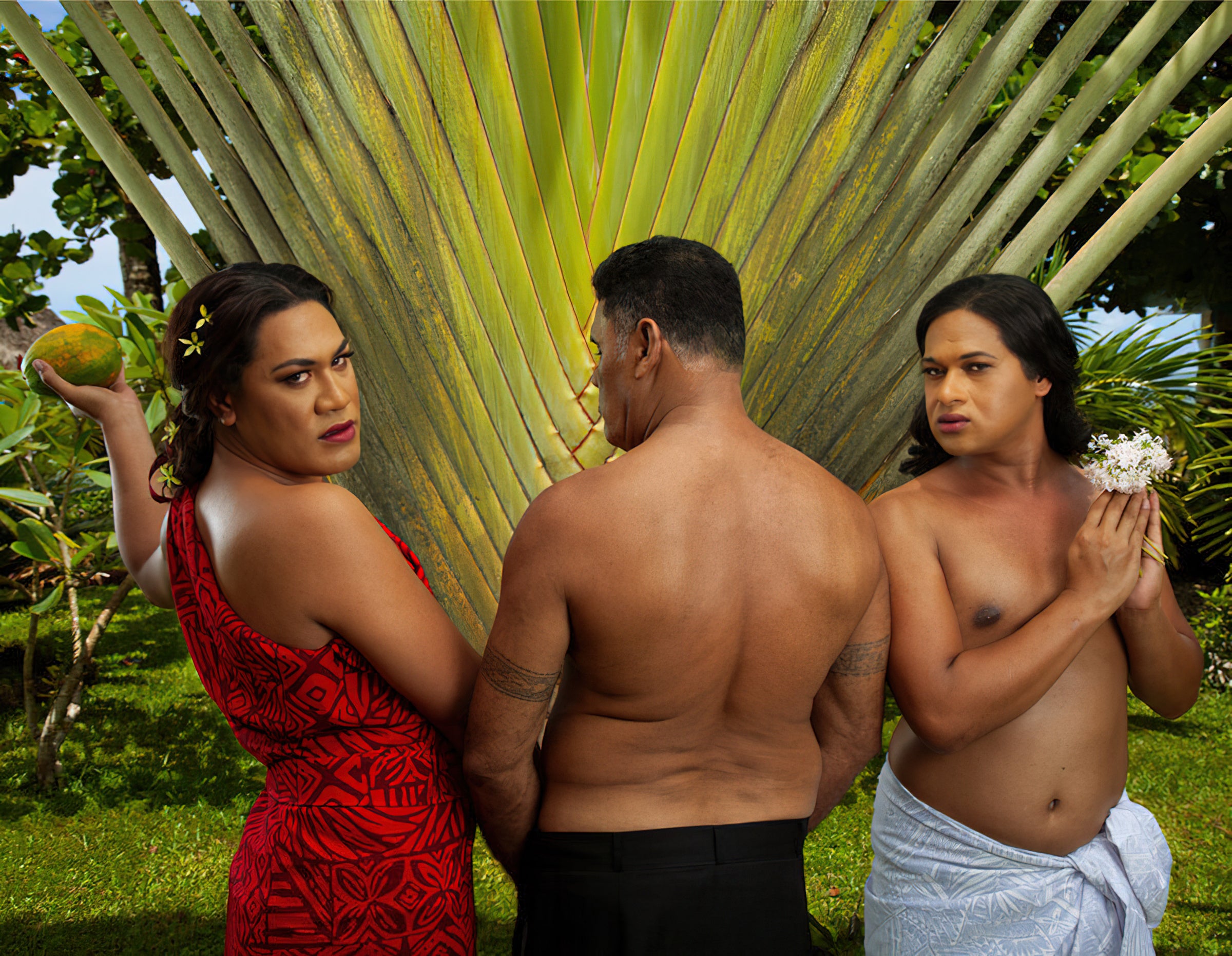 CV: How has Fa’a Sāmoa (‘the Sāmoan way’) traditionally understood third-gender people, as compared to Western concepts of 2SLGBTQ+ identities?
YK: In their research, Sāmoan American artist and writer Dan Taulapapa McMullin, with whom I co-edited the book “Sāmoan Queer Lives,” found a Sāmoan origin story in which the human race first began with two males. How and when such Indigenous Queer stories were written of and actively circulated in Europe by the Western explorers, missionaries, and merchants who encountered Māhū, Fa’afafine, and countless other Indigenous third gender communities coincided, as Dan’s work has revealed, with the West’s first beginning to entertain the concept we now understand as ‘Queer.’

By custom, Fa’afafine served very specific roles in Sāmoan communities; for example, as caregivers of young children and the elderly. Such roles have shifted with the introduction of capitalism, but this core essence as caregivers still remains. Our cultural identity has become undermined and overshadowed though, by the Western-originating Gay Pride movement, which, in my view, is homonormative, individualistic, and representing the white middle class.

CV: What’s next for you? And when will Sāmoa get to experience “Paradise Camp”?
YK: The exhibition will continue its journey after the Venice Biennale to Powerhouse Museum on Gadigal Land (Sydney, Australia), from March through December 2023, then tour Sāmoa in 2024. For more information visit yukikihara.ws.

— Cristina Verán is an international Indigenous Peoples issues specialist consultant, researcher, strategist, curator, and media producer. She was a founding member of the United Nations Indigenous Media Network. As adjunct faculty of New York University at the Clive Davis Institute of Recorded Music, her work focuses on Indigenous
popular music and culture.