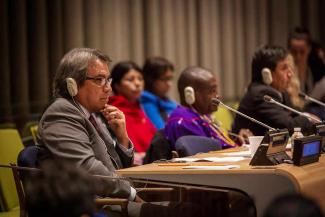 My expectations have been held up in certain ways, and in other ways there have been some disappointments. There have been victories across the globe, and many cases in which Indigenous Peoples have used the Declaration to raise awareness and to create understanding about their rights and even movement towards the implementations of the rights articulated in the Declaration.

In Belize, the Declaration was used just weeks after it was adopted by the UN General Assembly in litigation of a court case about Maya land rights. The Supreme Court of Belize referenced the Declaration in order to interpret that country’s constitution, and did so to affirm that the right to property under the constitution should be interpreted in line with the Declaration’s lands and resources provisions. The Court ruled in favor of the Maya people and their rights over their traditional tional lands. There’s a lot to be done in the future towards greater awareness about the rights of Indigenous Peoples as expressed in the Declaration.

In the U.S., we have seen that under the previous Administration the Declaration was in many ways taken into account by certain government agencies. Ever since President Obama endorsed the Declaration on behalf of the United States and declared that it would be a guide for U.S. action with regards to Indigenous Peoples, we did see some initiatives along those lines including in regard to consulting with Indigenous Peoples, land claims, and certain cultural issues.

In Latin America, we have seen the Declaration and also other international instruments concerning Indigenous Peoples, in particular International Labor Organization Convention 169, having an influence on government policy. For example, in the area of consultation with Indigenous Peoples, we see a number of countries in Latin America moving toward trying to develop adequate consultation mechanisms in line with the Declaration and ILO Convention 169. Unfortunately, in most cases those policy reforms have not been converted into action.