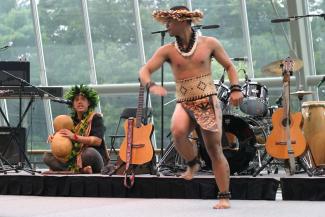 "I grew up with my dad discouraging me [from] dance,” says Kumu Kawika Alfiche. “It’s funny because the Western world came into Hawai’i and a lot of the Hawaiians [from the previous generation] grew up having to speak English and trying to assimilate.” Alfiche, while growing up in San Francisco, was interested in learning about his Hawaiian culture. He spent many years learning from a few select teachers, each called Kumu (meaning “source”), before ultimately leading his own group. He has been teaching hula and Hawaiian culture through the Hālau o Keikiali’I Cultural Group and at the Kaululehua Hawaiian Cultural Center, both in the San Francisco Bay Area, since 1994. Both groups focus on the skills of hula kahiko (ancient dance), which includes oli (chanting), mele (traditional songs), himeni (modern songs), nā mea hula (arts and crafts), lole hula (hula attire), ‘ōlelo (language), and mo’olelo (stories) with a special emphasis on traditional styles. The Center offers classes and stage productions for the public, including
educational workshops, performances, and other cultural events.

For Alfiche, performances are not simply for exhibition but also for spiritual expression. As with many Indigenous cultures, there is a Hawaiian belief that Hawaiians do not own the land, but exist in harmony with it. “There was no rubbish, there was no pollution, there was not a poisonous insect or animal on that island . . . everything was just in harmony,” Alfiche says. Hawaiians call themselves Keiki o Ka Aina, or “children of the land;” dancing and praying can be a way to commune with the land. As Alfiche sees it, taking care of the land is a combination of “not just like throwing your rubbish
away and all that stuff, but it’s also dancing, it’s also praying, it’s also sharing that energy and being thankful. Like, you know, go and hug a tree! You hug a tree and that exchange of energy does a lot. Or just raising your hands to the sky and saying, “Mahalo, thank you.” The dances that Hālau o Keikiali’I performs are similar to prayers, and are the same ones that Hawaiians would perform to pray to their gods like Pele, the goddess of volcanoes. At the same time, the dances can be used as exhibitions to share Hawaiian culture—Hālau o Keikiali’I even performed on Broadway a few years ago. As Hawaii experiences a revitalization of its language and culture, Alfiche says there is a movement supporting the younger generation “to dothings Hawaiian, to speak Hawaiian.  As far as the younger generation, we don’t have anything to worry about. As far as it is being carried on, it’s going to get carried on.” Alfiche and Halau ‘o Keikiali’i participated as guest artists at our Bazaar at the Mashantucket Pequot Museum in August 2013.