A Cow Is Life: THE POKOT-TURKANA CONFLICT 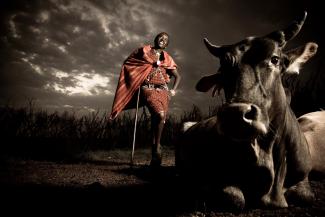 I was raised in a nomadic pastoralist community; I know firsthand the importance of owning a cow. My parents always reminded me that ‘a cow is life.’ The older I got, the more I started to witness the truth of that advice. In a pastoralist community, cattle are a source of food, pride, prestige, wealth, and status. Men with big herds of cattle hold leadership positions and young men cannot marry unless they have accumulated enough cattle for dowry. In the pastoralist communities, a cow is the source of life and also the cause of death. Given that droughts are becoming more frequent and more severe, this key resource is in grave danger —and this threat is changing the dynamics of these communities more than ever before.

Although my Maasai ethnic group reside in the southern tip of Kenya, we have a lot in common with the warring pastoralists groups in northwestern Kenya: the Turkana, Pokot, and Samburu. We all belong to the same Nilotic lineage; the Pokot and the Turkana are two bordering nomadic pastoralist communities and are are both regarded as great survivors inhabiting the harsh and inhospitable terrain of northwestern Kenya. Both groups migrated from Uganda to Kenya and have similar religious practices, diet, and social structures. The main differences are that they speak two completely different languages (Pokot speak Kalenjin and the Turkana speak Turkana); the Turkana don’t practice circumcision as a rite of passage; and some of the Pokot grow crops along with raising cattle. The Turkana also don’t bury those killed during enemy raids because they believe that touching the dead might transmit evil spirits to everyone in the community.

Pastoralism is still the backbone of many communities and countries across the continent of Africa. As a result of global warming and climate change, pastoralists are losing thousands of their livestock annually. Limited rainfall means less pasture and water, and this scarcity of essential resources is becoming the main cause of conflict. A government survey completed in 2010 counted an estimated 13 million cattle, 25 million goats, 14.9 million sheep, 1.7 million donkeys and 2.9 million camels across Kenya‘s arid and semi-arid lands, with the highest populations held by the Turkana and Pokot pastoralists in the northwest. Cattle are therefore a key resource crucial for the survival of these two communities, and for Kenya’s economy. The livestock sector provides an estimated 90 percent of all employment opportunities and more than 95 percent of household incomes

Most pastoralist groups in Kenya reside in the periphery of the country in areas that are prone to droughts and wildfires, and are also lacking in government control. The residents are therefore left alone to provide their own security, including the safeguard of their cattle and land. The conflict between the Turkana and Pokot can be partially attributed to their location; both groups are on the periphery of the country, a place that borders on some of the most unstable and violent countries in Africa: Southern Sudan, Ethiopia, Uganda, and Somalia. For decades, these countries have been suffering genocides, mass killings, insurgencies, coups, assassinations, and so many other atrocities. The lawlessness of this region where these countries converge has been transformed by rampant conflict into a no man’s land—and has become a conducive environment for raiding and other illegal activities.

Both Turkana and Pokot elders are appalled by the frequency and the scale of this conflict. Mzee (elder) Kericho said this regarding the Pokot-Turkana conflict in a recent report in the Turkana Guardian: “The only disease we are suffering from is the bullet syndrome. No grave in this village belongs to a person who succumbed from a disease like Tuberculosis, HIV/AIDS, or even Malaria; they are all victims of frequent raids and attacks. The population of Kainuk is greatly reducing while the government is doing nothing but watching. It is even worse inside this village because we are registering a high death rate, so we keep wondering where we will go from here because as we can see we will soon be forcefully evicted.”

Mzee Aguman, a local leader of the town of Kainuk, offered these thoughts: “It will be difficult for parents to take their children to school because the community depends on agriculture, livestock keeping, and small business ventures. All the livestock have been stolen and highway robberies make it hard to transport goods from Kitale, so sooner or later we will have no activity taking place in this region. The big issue is that the national police reservists who could offer protection to the residents while in their farms have been killed too.” As a result of this rampant bloody conflict, the village of Ng’irong’otuk, which is located on the outskirts of Kainuk trading center, has earned the name “Village of Death.”

The climatic effects of global warming have led to aggravated poverty, which, combined with a surplus of weapons and ammunition flooding the region through porous borders with warring states, has created a climate of violence that threatens the core of the pastoralist way of life indigenous to this region. There is so much pride in providing your own traditional food, raising healthy and colorful livestock the way your grandparents did, while protecting and nurturing the environment for your grandchildren and teaching them to do the same for the next generation. Once the cattle are gone, they will take with them the dignity, pride, prestige, and wealth sustaining these communities. Without cattle, pastoralists will become refugees in their own ancestral land.

Solutions for the Conflict

• Provide security, such as police stations and army bases, in northern Kenya to shield these communities from international bandits and terrorists.

• Include all community members in decision making processes, especially women and young adults. Mothers should be empowered and encouraged to caution their adult sons about the danger of raiding.

• Conduct a rigorous disarmament program; both Pokot and Turkana should be disarmed equally and at the same time.

• Invest more in the education of Pokot and Turkana children to create more opportunities for youth so they will not have to rely on raiding to combat starvation and provide for their families.

• Provide veterinary medicine services to these communities so that the cattle that survive the droughts don’t die from curable diseases.

• Improve infrastructure in the region for security personnel and the humanitarian sector.

• Build a pastoralist dialogue center between the Pokot and Turkana territories where leaders of both communities come and discuss matters affecting them. The center can also serve as a mediation center in case of disagreements, and be a place where people can drop off their firearms willingly and receive compensation for doing so.

—Stephen K. Muntet was born and raised in Maasai Mara, Kenya and is a master’s degree candidate at the University of Oregon Law School.

Photo: Stephen K. Muntet inside the kraal (enclosure for livestock) with cattle. Photo by Stuart Butler.