Courage, Creativity, and Vision: Co-recipients of the 2014 FIMI Leadership Award 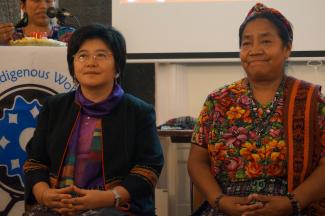 In May 2014, the Foro Internacional de Mujeres Indígenas (International Indigenous Women’s Forum) awarded its annual Leadership Award to two extraordinary and committed Indigenous women: Joan Carling, a Kankanaey activist from the Philippines, and Rosalina Tuyuc, a Kaqchikel leader from Guatemala, received the honor due to their creativity in addressing social issues with exceptional leadership and courage. By defending Indigenous women’s rights, these women make significant impacts on community, national, and international levels. According to the Forum’s program coordinator, Mariana Lopez, the award celebrates Indigenous women “who have implemented creative ways to address pressing social issues, demonstrating courage, creativity, and vision.”

Carling hails from the Cordillera region of the Philippines. She has over 20 years of experience working on Indigenous issues including human rights, sustainable development, environment, and climate change, as well as on the application of Free, Prior and Informed Consent. Her work with International Financial Institutions, the UN Framework Convention on Climate Change, REDD+ related mechanisms, UN agencies, and mechanisms relating to human rights and sustainable development in advancing the issues and concerns of Indigenous Peoples in Asia has led her to be elected twice as the Secretary General of the Asia Indigenous Peoples Pact, where she has represented 47 member organizations in 14 countries. Appointed by the UN Economic and Social Council as an Indigenous expert member of the UN Permanent Forum on Indigenous Issues for 2014-16, Carling is an exemplary model of an Indigenous activist who has dedicated her life to the causes of Indigenous Peoples throughout the world.

On receiving the Leadership Award, Carling said “it came as actually a big surprise. I did not expect this award, but I am very much humbled.” Carling works with Indigenous women in Asia and cooperates with FIMI on the participation of Indigenous women at the global level. While her work includes all Indigenous Peoples, she coordinates a program specifically for women with a policy of gender equality encouraging their participation to ensure that their concerns and rights are acknowledged. Such programs give Indigenous women the platform to embrace their needs and to fight for equality and justice.

Indigenous women are a vulnerable portion of an already vulnerable group. In addition to human trafficking and numerous human rights abuses, women must also deal with forced relocation from their lands. According to Carling, “because of the violation of our land rights, land grabbing is taking over . . . not only causing displacements, but also weakening the traditional knowledge of women and the contribution to resource management. We know that it’s women actually [working in] sustainable resource management, and they have the knowledge how to use resources in a sustainable way. We’re going to lose that if they’re going to lose their lands.”

The majority of the world’s Indigenous Peoples currently reside in Asia, and many are invisible in the eyes of the government, so Indigenous Peoples are increasingly asserting and defending their rights underground. Carling advises keeping an eye on the Philippines and Asia as a whole, since, as she explains, “the economic growth center of the world at this stage is Asia. There are a lot of infrastructure projects and a lot of foreign investments without any information or consultation with Indigenous peoples. That’s the kind of attitude that is prevailing, so we need to change that. We need to let people know that we exist and we want to manage and control the resources in our territories. We want to be able to practice our cultures, we want our young people to stay in our territories so that they will learn how to manage their resources for the future generations. It’s time to really develop, train, and then let the young people take more challenges. The youth are our hope, and so we need to ensure that they are there with us together and side by side.”

Co-recipient of the award, Rosalina Tuyuc was born in San Juan Comalapa, Chimaltenango, Guatemala. She is a nurse by profession, as well as a mother of five and grandmother of four, and one of the founders of the Coordinadora Nacional de Viudas de Guatemala (National Coordination of Widows of Guatemala). From 1988 to 2010 she served as general coordinator, helping to guide the organization’s transition to a leading Guatemalan human rights organization. Her key role in Guatemala’s peace processes led her to serve as president and rapporteur of the Commission on Victims of Violence from 1989–1992. From 1993–1995, she was a member of the International Committee Pro-Decade for Indigenous Peoples of the World, and in 2001, she co-founded the Asociación Política de Mujeres Maya (Political Association of Mayan Women). In 2004, as a member of the National Commission on Peace Accords, she was appointed president of the National Reparations Commission. Tuyuc has also held several public offices, including congresswoman and judge, and was a board member in the Congress of the Republic of Guatemala.

Tuyuc expressed profound gratitude for the support of grassroots organizations as she recalled her fights against racism, discrimination, and all forms of oppression that women have suffered. She recognizes the force of individuals and groups as deciding voices in the fight against injustice, oppression, and discrimination. On the current state of international conventions on Indigenous Peoples, women, youth, and environmental matters, she says “the only thing missing is goodwill on the part of the governments, on the public sector workers . . . so that we no longer have reason to protest, reason to cover the streets . . . [that] there is no longer a need to bring people to justice.” Recently in Guatemala, many public sector workers denied the genocide of Guatemala’s past. But Tuyuc affirms that “we have our own truth. The crimes of genocide must not be accepted, tolerated; must not be hidden. When there are committed people and due process, we see an opportunity for the justice system.”

In addition to the Leadership Award, Tuyuc has received various other awards including the Niwano Peace Prize. Throughout her life, she has trained generations of Indigenous youth. She is an exemplary teacher and spiritual guide. Committed to finding the good in people, Tuyuc recognizes the power of alliances. In her vision of Guatemala’s future, “there is still a long journey where racism and inequality affect us profoundly, along with the lack of participation and exclusion of Indigenous Peoples. Unfortunately the laws are not at the service of all and instead are at the service of a few, but little by little we have made change.” Her message to the women of Guatemala, and for the world’s people struggling for recognition and for rights that have been neglected for hundreds of years is as follows:

“I encourage them to keep staying unified and continue striving to demand justice, to defend their rights both as individuals and as a collective unit. I also tell them that today is when the women should continue rising up so that our rights are never violated. Women should keep being a mosaic of a force of knowledge that unites us with so much cosmic energy. Women connect, we connect very much with the air, with the earth, with the moon, and with the stars: this is to say that we are not alone. We keep working and we also keep transcending borders to assert our rights.”