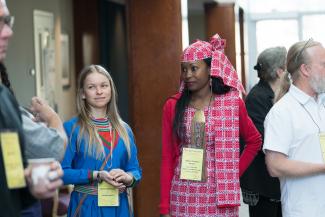 Indigenous Peoples from around the world gathered in Bonn, Germany to make their voices heard at the 23rd Conference of the Parties (COP23) of the United Nations Framework Convention on Climate Change, held November 6–17, 2017. It has been two years since the COP21 in Paris, and elected leaders around the globe have proven unwilling to take the bold, urgent action needed to respond to the climate chaos wreaking havoc on the planet. At COP23, Indigenous Peoples continued to advocate their positions both inside and outside the formal meetings they have limited access to. Although coming from vastly different regions and cultures, the importance of traditional knowledge in regards to climate change is a shared value.

“Indigenous Peoples of Africa are facing climate challenges daily—loss of biodiversity, change of seasons where rainy seasons are shorter and dry seasons longer. For my people, as we are nomadic and semi-nomadic, we have relied upon our traditional knowledge as a basis for helping us cope with climate adaptation and mitigation for centuries,” said Hindou Oumarou Ibrahim (Mbororo) executive committee member of the Indigenous Peoples of Africa Coordinating Committee. “The Arctic has been changing fast, and the Indigenous Peoples living there have been forced to adapt and rely on the knowledge they inherited by their ancestors, gained through a life close to the nature. The world needs to base its decisions on the best available knowledge there is. Indigenous knowledge is currently missing in these negotiations and excluding it is a loss the world cannot afford,” said Jannie Staffansson (Saami) of the Arctic and Environment Unit of the Saami Council.

These young women leaders are active members of the International Indigenous Peoples Forum on Climate Change (IIPFCC), the Indigenous representative body focused on impacting the COPs. During the Paris conference the IIPFCC realized a small victory in regards to the Local Communities and Indigenous Peoples’ Platform. This Platform was designed at COP21 to create a space to strengthen traditional knowledge and exchange lessons learned on reducing emissions, adaptation strategies, and building resilience. The parties at COP23 debated how much decision-making power they could concede to nonparty “stakeholders.” In the final decision, a shared chairmanship by state and local communities and Indigenous Peoples’ representatives was agreed to.

According to Oumarou Ibrahim, who co-chaired the IIPFCC during the negotiations, the Platform is an opportunity for States to take part in the sustainable way of life of Indigenous Peoples. But, she cautioned, “this cannot be effective if Indigenous Peoples do not take part at the decision-making bodies of the UNFCCC where the real decisions impacting the lives of our peoples are taken. Being in the room where the negotiations happen is one thing, but taking the floor to argue and give evidence in order to take the right decisions is another.” She emphasized the need for the Platform to be open, inclusive, and created on an equal basis, but also said she remains worried that this platform could be used by various blocks such as the G77, the largest intergovernmental organization of developing countries in the United Nations, to leverage exchanges on climate finance that could weaken the Platform.

“In the Saami’s view, we need to be part of the UNFCCC processes not only because of our knowledge and holistic understanding of the ecosystems, but also because the whole worlds needs to be engaged in these important decisions about our Mother Earth,” Staffansson said. She highlighted that since the States cannot represent Indigenous Peoples, millions are left out of these negotiations. “We all have the right to be a part of these negotiations but we need to be collaborated with in a respectful manner. We are hoping that the Platform will be constructed in a way that is inclusive and will ensure benefit sharing; not [simply] a continuous extraction of our knowledge. The Platform needs to be based on the IPFCC principles of full and effective participation, equal status and representation in the Platform, and ensuring our self-selection processes,” she said. On the frontlines of climate change, Indigenous Peoples are clearly rights holders, not just stakeholders, in the UNFCCC. The hope of the IIPFCC is that they can increase their role in these intergovernmental talks and contribute to deciding their own future via mechanisms such as the Platform. —Miriam Anne Frank