Confronting Megaprojects: Development Without Our Consent is not Development 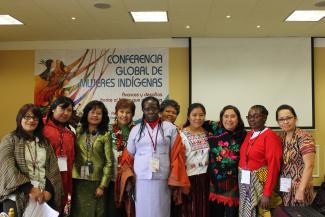 Indigenous women delegates at the World Conference of Indigenous Women exchanged experiences of “megaprojects” on Indigenous land and developed strategies to confront continued incursions on their territories. Forestry and agricultural initiatives have displaced forest peoples in Rwanda and Cameroon, while mining projects across the Pacific, the Arctic, and the Americas are affecting numerous Indigenous communities. Hydroelectric dams are the newest form of so-called “development projects” that are displacing Indigenous communities without seeking or securing the Free, Prior and Informed Consent of those affected.

Coinciding with the Conference was the release of a new report from The Rights and Resources Initiative, which, through GIS mapping technology, revealed that nearly one-third of industrial concession areas in emerging market economies overlap Indigenous community land. The research studied over 1.5 million square kilometers of agricultural, forestry, and mineral extraction concessions in Africa, South America, and Southeast Asia; nearly 500,000 square kilometers were found overlapping with Indigenous territory.

Juliana Prado (Ngäbe-Buglé Comarca, Panama) cited the Barro Blanco hydroelectric dam project in her community as the latest example of Indigenous dispossession. “The Indigenous people there are born with everything they need: a beautiful climate, a healthy environment of streams, rivers, forests, mountains. All this belongs to all of us. And then the government comes and takes and destroys it, while at the same time saying that they are doing this to develop us,” she said. The Barro Blanco dam provoked demonstrations that led to the killing of three Ngäbe-Buglé demonstrators in 2012, and the death of a further campaigner this year. “This isn’t a development, it’s a destruction and massacre of the Ngäbe people,” said Prado.

Dams are also affecting the Hopi Nation in the United States. “A hydro dam took our land, but all the electricity generated goes outside the reservation. It’s the same with uranium mining. . . . We are at the beginning and the end of the nuclear waste cycle. There was no Free, Prior and Informed Consent over the establishment of the nuclear plant,” Agnes Williams (Hopi) said.

Agnes Leina of Kenya discussed the plight of her people, and the commonality of problems faced by Indigenous women around the world: “We are being pushed left, right, and center from our land, and the people who are most affected by that push are the women and children. There are no environmental assessments, and there is no Free, Prior and Informed Consent,” she said.

Delegates also discussed the importance of asserting Indigenous title over their customary lands, a complex issue in light of the Indigenous worldview around land ownership. Nellis Kennedy-Howard (Navajo) explained: “As Indigenous people we live off the land; we don’t own it. You can’t own a living being. But I also know that by not ‘owning the land,’ that it makes us invisible to western civilization and federal governments across the globe.”

The notion of invisibility has characterized the relations between Indigenous Peoples and States and businesses for far too long. “Governments aren’t recognizing us as separate sovereigns, or they’re just choosing not to recognize us— especially companies coming in to Indigenous lands to conduct mining, fracking, and extraction,” Kennedy-Howard said. And yet, if governments and businesses are forced to change this attitude, Indigenous Peoples would not be the only beneficiaries. As Victoria Tauli Corpuz (Igorot) of the Philippines
said, “Our message to governments, to the UN, and to corporations, is that they should work with us and not against us, because we have answers to the environmental, social, economic, and cultural crises that the world faces today.”