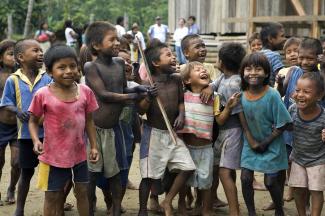 Just a few days after Colombia’s president, Juan Manuel Santos, signed a historic peace treaty with the Revolutionary Armed Forces of Colombia (known as FARC), a nation-wide referendum voted it down on October 2, 2016 by slim margin, 50.25 to 49.75 percent. While this result may not represent what the majority of Colombian citizens feel—only 38 percent voted and the “No’s” won only by a small margin—the result is valid. Fortunately, both sides of the conflict have indicated they intend to continue advancing towards a politically negotiated solution and the bilateral ceasefire will hold through December.

I was in Colombia three weeks prior to the plebiscite and the result did not surprise me. People who intended to vote “No” expressed their displeasure at the incentives given to the FARC guerillas to lay down their arms, which, they said, let them “get off easy.” The FARC is very unpopular, and the prospect of leaders, if they confess their crimes, not serving prison terms angered many Colombians. Fear-mongering and a disinformation campaign by former president Álvaro Uribe and his allies, who led the “no” campaign, confused many people. Also, a number of controversial issues currently being debated were conflated with the vote. For example, President Santos, who staked his term in office on achieving peace, is unpopular, and there is a pervasive distrust of the political establishment—a sense of “whatever they’re promoting, it won’t be good for us, the common people.”

Like other sectors in the country who bore the brunt of the violence, Colombia’s Indigenous Peoples favor the Accord. On October 10, 5,000 Indigenous people, students, and campesinos (farmers), shouting in unison “¡Acuerdo Ya!” (Sign the Accord!), ended a 3-day Marcha de las Flores (March of Flowers) at the Plaza Bolívar, the main square in Bogotá. The first 2,000 Arhuacos and Misak were able to meet with President Santos. “Indigenous and Afro-Colombians cannot wait for a solution to this crisis while the Colombian government makes institutional adjustments,” stated an official Regional Indigenous Council of Cauca release on October 4. President of the National Indigenous Organization of Colombia, Luis Fernando Arias, in a radio interview, stated, “We believe that the victims of this conflict voted in favor of the accord, and this is legitimate.” Both organizations are calling on the UN for help in monitoring the upholding of the ceasefire.

People are weary of war. The army’s role has at times been so reprehensible with respect to human rights abuses that a few years ago it hired U.S. public relations firms to help improve its image. Many of the demobilized right-wing paramilitaries, who often were accused of colluding with the army and doing its “dirty work,” regrouped and continued as gangs of common criminals. The FARC decided to enter peace talks after coming to the conclusion that after 50 years of fighting, a military victory was not possible.

The country’s Indigenous Peoples have suffered disproportionately during the conflict because the fighting has mainly taken place in rural areas. Indigenous communities were often caught in the crossfire between armed actors, both legal (police and military) and illegal (insurgents and paramilitaries). Most pueblos wanted no part of the conflict and refused to ally themselves with any armed actor. Many insisted on maintaining autonomy and control of their territories. Members of the unarmed guard patrols found in several pueblos would travel to a guerrilla camp to negotiate the release of a kidnapped leader. This institution has won high praise from mainstream Colombian society and beyond, as evidenced by media treatment and national and international awards.

This position of neutrality and autonomy was not acceptable to combatants, who told pueblo members that failure to cooperate obviously meant they were on the other side. The FARC, along with another insurgent army known as ELN (National Liberation Army), rejected the pueblos’ stance because the guerrillas claimed that they represented the interests of the common people. Guerrilla forces everywhere survive by persuading or coercing the civilian population in the area to support them, or at least tolerate their presence, which meant that many pueblos had few options. Threats and intimidation were the rule, along with reprisals following failure to comply, the latter often very bloody, to “teach a lesson.” In the worst periods of the conflict the State was absent in about one-fourth of the country, which meant that it was often one of the armed actors that controlled local communities. Both the guerrillas and paramilitaries engaged in narcotrafficking. The practice of recruiting child soldiers was an additional worry for Indigenous, campesino, and Afro-Colombian families.

Because they were disproportionately affected by the violence and hence important stakeholders in the peace process, both Indigenous and Afro-Colombian communities’ exclusion from the four-year peace process until the last minute occasioned widespread indignation. Only on August 24 were their concerns about securing territorial rights and other guarantees, including Free, Prior and Informed Consent, entered into the Accord as the Ethnic Chapter.

Even if the peace accords had been approved by the referendum vote, everyone who knows Colombia understands that such a step would be just the beginning of what promises to be a very long haul. This is because so many of the structures that produced and maintained the conflict remain in place. Corruption in every branch of government is a tremendous problem and shows no signs of decreasing. The war on drugs has been an abysmal failure with a huge cost. The drug trade continues to be a national scourge, and the blame by no means lies only with Colombia, because the market—the U.S. and Europe—is what sustains narcotrafficking. Neoliberal measures like free trade agreements have not benefitted poor Colombians, including the pueblos, which have mounted protest after protest denouncing them.

Finally, the state is still effectively absent in many parts of the country. One dissident FARC front refused to go along with the top leadership, and they are found in areas where the proportion of Indigenous to non-Indigenous inhabitants is the highest in the country: in the southeastern plains and forests. In this region, open combat between FARC and former paramilitaries continues to this day to secure territory planted in coca, or rich in minerals like tungsten and coltan. The government will have to take charge of the areas previously controlled by the now-demobilizing FARC to establish state authority and maintain order.

The Indigenous movement has accomplished a great deal during its lifetime. Whereas in the 1970s and 1980s leaders were thrown in jail, disappeared, or assassinated, they now receive protection from the State, and some have been elected to public office. The Colombian 1991 Constitution guarantees more rights and protections to Indigenous citizens than any other Latin American country. Also, the country’s pueblos, which constitute less than four percent of the national population, now collectively own almost thirty percent of the national territory. The National Indigenous Organization of Colombia mediates between the state and pueblos during crises, but also resists certain state actions. For example, it has organized highway blockades and strikes, most recently in May. However, the movement is factionalized, which prevents it from being as strong as it might otherwise be.

The prospective future of a Colombia at peace is not totally rosy. Neoliberal ideology and policies endorsed by the country’s elites and international interests have promoted globalization processes that favor land grabs intended for mega-development projects like hydroelectric plants, mining, and exploitation of oil reserves. As in most of Latin America, the government retains subsoil rights, and so despite the fact that many such projects are directed at territories legally and collectively owned by the pueblos, the projects go forward after putatively “free, prior, and informed consent” agreements are signed, some of them fraudulent and many obtained under extreme pressure. We can hope for, and work toward, a future in which differences are resolved through dialogue and not violence, one that also vigorously, and in good faith, works to advance the interests of the country’s pueblos.

—Jean Jackson is a Cultural Survival board member and professor emeritus in the Department of Anthropology at the Massachusetts Institute of Technology. Her books, articles, and teaching focus on medical anthropology, social and ethnic identity, gender issues, and Indigenous mobilization in Colombia.