Citizen Stewardship: Mobilizing to Protect the Ocean and Its Resources in Hawai’i 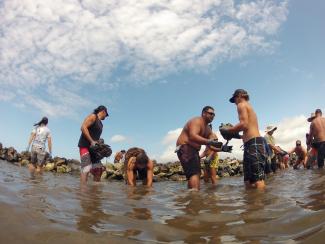 There are a number of cultural values and beliefs tied to the ocean in the Native Hawaiian community, but two have been particularly notable in terms of culture and governance in recent years. One is that the ocean is a highway, a connecting source between Pacific people and the world. Another common meaning for rural nearshore communities is that the ocean is our icebox, and that we have a kuleana— a right and responsibility—to take care of it.

Communities are working to bring back the understanding that the moana or kai (ocean) is part of the ‘āina (land; also that which feeds). In earlier times, the ocean, like the land, was part of human-made delineations of the environment in order to manage resources, usage, and impacts. There is a long tradition of viewing the ocean as an extension of the land and the community attached to it.

The worldwide voyage of the Hawaiian canoe Hōkūle‘a is widely celebrated, but less is known about efforts of rural and Native Hawaiian communities to return to a tradition of community place-based mālama ‘āina, or care for the source of life and food, on the ground. This tradition is part and parcel to a larger system of resource management established by the great O‘ahu Ali‘i (chief) Mā‘ilikukahi some 400–500 years ago, and is referred to today as the ahupua‘a system.

The ahupua‘a was a section of land, often running from the mountain to the sea, broken down horizontally into a number of socio-ecological zones by type of use ranging from the wao akua (realm of the gods) to the wao kanaka (realm of man). At the time of the overthrow of the Hawaiian Kingdom in 1893, Kingdom law codified the ahupua‘a boundary as extending as far as the fringing reef—and if there were no reef, a mile out to sea. These places from the shoreline out were once commonly known as konohiki fisheries. Konohiki is a term used for a chief or land manager for a region whose work was to entice and guide the community to be good stewards of their place.

The boundaries of the ahupua‘a system persist in many ways, and though Hawai‘i has changed, traditions around management persist within many of them, especially in remote rural Native Hawaiian communities. In the absence of a konohiki, or an equivalent institutional mindset, rural and Native Hawaiian communities are bringing back the tradition of caring for their places and working to bring back this unique mindset. Citizenship is stewardship.

Threats to the Ocean

What happens aground and what impacts the land—including tourism, the defense industry, industrial agricultural practices, population growth—all creates output that flows into and harms the ocean. This is accompanied by concern for the depletion of our icebox, including seaweed and shellfish, by modern practices and values around fishing itself. Fishing is not just a pastime in Hawai’i, but a traditional subsistence practice part and parcel to the ahupua‘a system, which included community-based comanagement guided by the traditional ecological knowledge of the area.

The greatest threat, however, is rooted in our relationship to our oceans, which in many ways comes down to the management of our behavior. Government management today is overly centralized and underfunded and exists in an environment of ever diminishing natural resources. In response, rural Native Hawaiians are mobilizing and working to find ways to help resource management succeed in their communities.

In 1994, concerned by impacts of Native Hawaiian subsistence fishing practices and inspired by the work of the organization Hui Mālama o Mo‘omomi in managing Mo‘omomi Bay, island of Moloka‘i, the State of Hawai‘i created legislation to empower communities to share power and co-manage with government and to revive traditional roles and practices in how their fisheries are managed. This law was called the Community-based Subsistence Fishing Area (CBSFA) law.

After more than 20 years, our state government established the first subsistence fishing rules for Hā‘ena, Kaua‘i: an effort spearheaded by the Hui Maka‘āinana o Makana, a small nonprofit created by the traditional families of the region. Today, following a 25-year effort, the first Moloka‘i CBSFA rules for Mo‘omomi Bay are now at the rule-making process. In part, the effort starting in Mo‘omomi gave birth to E Alu Pū (Move Forward Together), a network of over 30 mālama ‘āina groups from across the state. They have gathered to share knowledge and build a grassroots movement to mālama Hawai‘i for 15 years now.

Beyond fisheries, Native Hawaiians also developed a unique style of aquaculture by way of loko i‘a, or fishponds. Upwards of 488 loko i‘a were documented across at least 6 of the main islands. These ponds have become kīpuka, or oases, where communities—especially those led by young Native Hawaiian leaders—are finding a place to work and revive traditions of laulima; working together to revive traditional practices of mahi i‘a (fish farming) with potential to someday feed Hawai‘i. For this purpose the Hui Mālama Loko I‘a (the group that cares for fishponds) was created not long after E Alu Pū, and has grown today to encompass almost 40 restoration efforts across the state.

A key to bringing life to the shoreline and in loko i‘a is the presence of clean freshwater flowing down from the mountains. It is at the shoreline that E Alu Pū elder Uncle Henry Chang Wo said that the ocean will hānau, or give birth, to life such as limu (algae), another important cultural and dietary resource for Native Hawaiian culture. Inspired by the efforts of E Alu Pū, Uncle Henry helped give birth to the Limu Hui to retain traditions and practices around limu gathering and use, to educate the public on its importance, and to bring back limu as part and parcel to a healthy shoreline ecosystem. No limu, no fish.

The E Alu Pū network created the nonprofit Kua‘āina Ulu ‘Auamo (KUA) in 2012 to help support their work; KUA works with and on behalf of E Alu Pū and its members to find ways to build capacity through a mix of network solutions, tools, and activities. Since 2012, KUA has been asked to facilitate the Hui Mālama Loko I‘a and worked with Uncle Henry and Wallace Ito to develop the Limu Hui.

E Alu Pū, Hui Mālama Loko I‘a, and the Limu Hui each meets annually with a different host on a different island every year. The gatherings focus on the stories and resources of the host place, and together they engage in activities to care for land or nearshore environments. Through these various activities, the hui build an environment to empower each other around common visions, strategies, and governance approaches. From these large gatherings, smaller topicfocused groups, workshops, or projects can arise, and KUA works to assist them when requested.

We work from the inside out and from the bottom up. Our journey begins with our relationship with ourselves, each other, and our ‘āina. We reclaim our community agency and traditions of konohiki, laulima, mālama ‘āina, and aloha ‘āina, among others, to affirm and embrace the best of our island communities and their roles in the care of Hawai‘i. We are also informed and guided by current scientific knowledge and ongoing research. All can help lead us to a new era of biocultural resource management and governance in Hawai‘i.

We gather around a shared belief that empowered community stewardship efforts lead to an abundant, productive ecological system that supports community wellbeing, or ‘āina momona (abundance; literally the fat lands). If we start by empowering our place, we grow strong from the core; when we connect, we begin to spread this energy across our island in the middle of the sea, the vast ocean, and the globe we reside on. Communities must be resilient in an age of climate change, and we see no better way to address this than by starting from the grassroots.