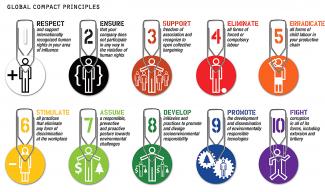 Corporations are increasingly recognizing the link between good business and respecting human rights. This is reflected in the more than 12,000 corporate participants and other stakeholders from over 145 countries in the UN Global Compact, the largest voluntary corporate responsibility initiative in the world. The Global Compact is a strategic policy initiative spearheaded at the United Nations for businesses committed to aligning their operations and strategies with 10 universally accepted principles in the areas of human rights, labor, environment, and anti-corruption. It is a practical framework for the development and implementation of sustainability policies and practices to help advance sustainable business models and markets.

In February, Cultural Survival interviewed Chief Wilton Littlechild (Cree) from Alberta, Canada. Chief Littlechild served two terms as the North American representative to the UN Permanent Forum on Indigenous Issues and is currently a member of the UN Expert Mechanism on the Rights of Indigenous Peoples. He also advocates for the inclusion of Indigenous Peoples’ rights at the UN Global Compact and the Business and Human Rights Forums.

Commitment to respecting the rights of Indigenous Peoples should be reflected in a business enterprise’s policies. Chief Littlechild says that signatory companies to the Global Compact need to create and enforce a policy framework that assesses the risks and actual impacts on the rights of Indigenous Peoples arising from their activities and business relationships, and should express their commitment to meet this responsibility through publicly available policy that is informed by relevant expertise; that stipulates the enterprise’s human rights expectations of personnel, business partners, and other parties directly linked to its operations, products or services; that is communicated internally and externally to these parties; and that is reflected in operational policies and procedures. Enterprises are also advised to assess company compliance with Indigenous rights and, where possible, include Indigenous Peoples affected by their operations.

Human Rights Due Diligence and Remediation

A human rights due diligence process should be established to identify, prevent, mitigate, and account for how corporations address their impacts on human rights. The process should draw on independent human rights expertise and involve meaningful consultation with potentially affected groups. Enterprises that pose risks of severe human rights impacts should formally report on how they are being addressed, including publicly available annual reporting and voluntary assessment measures. Chief Littlechild also recommends that the Global Compact “ensure that signatory companies, where relevant, create the necessary mechanisms to ensure that grievances are identified and addressed in a timely manner.” As stated in Principle 29 of the Comment on Business and Human Rights, “Business enterprises should establish or participate in effective operational-level grievance mechanisms for individuals and communities who may be adversely impacted.”

The Followup Study on Extractive Industries gives recommendations for potential safeguards in the form of advice to States and extractive industries. Chief Littlechild believes the implementation of these recommendations could help to protect the rights of Indigenous Peoples by implementing them in the Communication on Progress. “In this process,” he explains, “the signatory companies of the Global Compact annually provide public disclosure to stakeholders on progress made toward implementing the 10 principles of the Global Compact and supporting broader United Nations goals and issues. This serves to enhance transparency, accountability, drive continuous performance improvement, and provide a repository of corporate practices to promote dialogue and learning. Such a process would be particularly valuable, as those businesses which have not adequately reported to the Global Compact through the Communication on Progress are faced with being expelled from the Global Compact.”

When companies are in clear violation of international human rights standards, there are several mechanisms within the UN system for filing a complaint. “It should be recognized that Indigenous Peoples often face particular issues in accessing existing grievance mechanisms. This is not to say that there are no mechanisms for stopping the violation of the rights of Indigenous Peoples,” Chief Littlechild says. These include the recently established Universal Periodic Review, which puts measures in place to stop the violation of international human rights standards. While the enforcement measures necessary to stop corporations from violating Indigenous rights exist largely under the control of a State’s legislation, there are some regional and international human rights bodies that may act to stop human rights violations within their jurisdiction. This involves mechanisms such as human rights tribunals and international or regional courts such as the European Court of Human Rights. In the Comment on Business and Human Rights, some valuable mechanisms and international institutions for obtaining redress and stopping violation of human rights are discussed in Articles 27, 28, 32, and 40 of the Declaration. In the ILO Convention’s monitoring process, complaints can be brought before a Committee of Experts. However, Chief Littlechild says, this only applies to States that have ratified the ILO Conventions. In addition, Treaty Bodies can issue general comments and issue recommendations through specific country reviews. Other avenues of recourse for Indigenous Peoples are human rights tribunals where they exist nationally or regionally.

In 2001, the city of Melbourne, Australia proposed to allow cities to sign onto the Global Compact. The Cities Programme of the Global Compact has since expanded significantly and includes over 90 different cities across the world, focusing on collaboration among all levels of government, business, and civil society in order to enhance sustainability, resilience, diversity, and adaptation within cities and in the face of complex urban challenges.Chief Littlechild says that although involving States in the Global Compact “could provide additional pressure on companies to be more cognizant of potential human rights violations,” it presupposes that the States have adopted legislation in support of these principles and rights, that they have a desire to pressure companies to conform to being cognizant of human rights violations, and that the States themselves are not complicit in the violation of these rights. For example, the Committee on the Elimination of Racial Discrimination pointed out that Canadian companies abroad have been violating the rights of Indigenous Peoples, and that because the State charters these corporations, there is an extra-territorial jurisdiction to make these companies operate within the power of Canadian law. The Committee has made similar observations in reference to the US, concluding that the United States must “take measures to stop the violation of the rights of Indigenous Peoples by United States registered companies.”

To read the full interview with Chief Littlechild, including experts from the studies and comments referenced in this article, visit: goo.gl/GoRlE