Change Is in All of Us 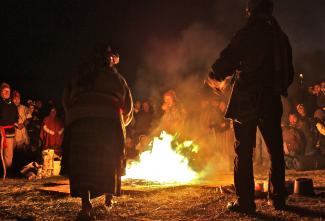 On the last day of the 5,124 year cycle of Oxlajuj Baktun, people gathered across Guatemala in curiosity, in prayer, and in hope. Guatemala’s Ministry of
Culture extended an open invitation to participate in the “New Dawn” celebrations at the ancient Maya city of Iximche, outside the modern Maya city of Tecpan.
As the sun set on the evening of December 20, a booming sound system played a soundtrack of conch shells and flutes while a professional dance crew, mostly white latinos dressed in costume, performed folkloric dances and re-enacted the ancient Maya ball game. Sculptors were hired to build a modern version
of the typical Maya stellae, depicting in Maya glyphs the story of Iximche’s invasion by the Spanish, and in the words of the Ministry of Culture, the subsequent “death of the Mayan Civilization.”

Meanwhile, a group of local Kaqchikel Maya conducted a small ceremony on the other side of the ruins. The irony of celebrating the “new dawn of the Maya” with a statement describing them as a race relegated to ancient historywas not lost on the grassroots Indigenous activists. Arriving on the morning of December 21 with megaphones and banners, the Waqib’ Kej Convergencia interrupted the Ministry of Culture’s scheduled events to issue the following declaration: “The communities of the Maya Kaqchikel people of Guatemala announce to the world our indignation at the folklorization and commercialization
of the Oxlajuj Baktun by the institutions of the Guatemalan State.”

They further called for the recognition of the continuity between their ancestors and the generations of Maya that currently make up a majority of the country,  who are systematically marginalized by Guatemala’s modern government and corporations. They urged Indigenous Peoples across the country to join together during this new era in exercising their rights to construct a social and political model based on the principles, values, and practices in accordance with their cosmovisión.

Most Maya across the country had opted out of statesponsored events in favor of honoring the change of cycle more privately. Many held quiet, simple ceremonies in sacred places local to their communities, with friends and family, allowing for introspection on what the new cycle might bring. Daniela Ixmucané, a community leader from Tecpan, noted that those waiting for some momentous occurrence, be it positive or negative, were mistaken. Rather, she explained, “The change is in me. It is in all of us.”

This same sentiment inspired massive mobilizations of Indigenous Peoples in Canada last December under the impetus to be “Idle No More.” It is also what brought thousands of Zapatistas out in heavy rains to march across Chiapas on December 21. Maya spiritual guide Alma Temaj emphasized that the new era is for “our people, but also for all humanity.” The words of Ixmucané ring true: “We are the only ones responsible to make change, to bring positive development for our peoples in this new era.”