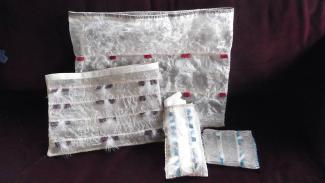 At a recent appearance at the Sheldon Jackson Museum in Sitka, Alaska, visiting artist resident Coral Chernoff (Alutiiq) brought with her a bear intestine that was recently harvested from Kodiak. She stood in the museum gallery and, holding onto the sides of the intestine, began gently blowing. With each breath the intestine became longer and wider. Once blown, Chernoff
demonstrated the waterproof quality of the material by pouring a glass of water into the organ. There were no leaks; when wet, the texture of the intestine was silky and incredibly soft.

Historically, women from Kodiak Island utilized the viscera of bears, seals, and whales to construct durable, waterproof, and windproof parkas (sometimes referred to as a kamlieka). Such parkas were ideal for Kodiak’s maritime climate. They were worn by sea mammal hunters when out on the water in kayaks and during celebrations where the “gut parka” held symbolic meaning. Gut was also used to make containers, window coverings, and hats.

Chernoff is entirely self-taught and has been experimenting with processing and sewing gut materials for the last few years. She says she enjoys making items that use natural materials from her home on Kodiak Island; along with working with intestines, she also experiments with bird skins, grasses, spruce roots, fish skins, and furs. With the bear gut that she brought to the museum, she plans to make her son a parka. The process is labor intensive and requires intimate knowledge of the properties of the gut material: after the animal is killed, the intestines are removed and thoroughly washed. Both the inside and outside are scraped clean with a spoon to remove all of the fatty tissues. Once clean, the intestines are hung to dry. They can then be split down the middle, wrapped into a ball, and stored in a cool place until she is ready to use them.

Although gut materials were once used as a common textile material from the far north to the south central regions of Alaska’s coast, Chernoff is one of a few Alaskan artists continuing
this tradition. During the Russian-American period, Alaska Native people were introduced to manufactured clothing and gradually the need for Native-made clothing, such as gut parkas, dwindled. As Chernoff says, “We didn’t have to make gut or salmon skin parkas because we could just go to the store and buy them.” Today many Alaska Native artists are making choices to practice, preserve, and pass on customary traditions like gut processing and sewing so that these traditions remain a part of Alaska Native culture and identity. While some artists like Chernoff are working to revive their cultural traditions on their own, there are also institutions that provide support for Alaska Native artists. Non-profit institutions such as The CIRI Foundation and the Sealaska Heritage Institute provide financial support to encourage heritage programs among Alaska Native peoples. Museums and cultural centers such as the Alaska Native Heritage Center in Anchorage, the Alutiiq Museum and Archaeological Repository in Kodiak, the Alaska Native Arts Foundation in Anchorage, and other institutions provide support for workshops and training programs for Alaska Native artists. Such programs create opportunities to make Alaska Native art more visible in the state, help to solidify an image of Alaska Native culture, and financially support artists and tradition bearers in continuing their work.

One of the most important benefits for promoting Alaska Native heritage relates to healing from the effects of colonization. Heritage programs like those mentioned above can instill a sense of cultural self-esteem, dignity, and pride. With colonization, Alaska Native people experienced destructive cultural loss. In many cases they were made to feel ashamed of their Native heritage and were denied opportunities to learn about their cultural practices. Alaska Native heritage programs act to reverse the negative impacts of colonization by focusing on positive aspects of culture, reinforcing Alaska Native traditions as a source of pride that individuals should value and hold on to.  Along with encouraging pride in culture, heritage projects also work to reclaim knowledge about Indigenous culture that has sometimes been controlled or silenced by dominant cultures.

In some situations, colonization alienated Native people from their material culture through the removal of cultural objects to museums or private collections. In other cases Native communities were alienated from their ancestral lands and natural resources through changes in land ownership or coercive relocation of Native communities. Reintroducing the knowledge of artistic practices and art forms, returning to important ancestral places, and publicly performing or practicing traditions that were once condemned reclaims the authority over Native cultural practices to living Native people.

Alaska Native heritage programs ground people in who they are, and help to establish the characteristics that make a culture distinct. The materials used to make some objects intimately connect the object to the place where the materials were collected, and by extension, the people who inhabit that region; for example, the fine beach grass of the Aleutian Chain used in basket making; argillite used for carving from the Queen Charlotte Islands; and vivianite found on the cliffs Nelson Island used as pigment. Perpetuating the knowledge of specific artistic materials and traditions by making, using, and documenting them helps to maintain a distinct cultural identity.

An additional benefit for heritage projects is that these activities create opportunities to encourage continuity and connection between generations; they often take place in a setting that includes the participation of multigenerational community members. As Chernoff explains, “It is not just about making art, it’s the context that takes place around it: the stories, having people get together and share food. In my family we had weaving every Sunday night and we would sit around and learn.” Such events are important because they create opportunities for young people to interact with and learn from elders, who are considered by many Alaska Natives to be the backbone of Native communities. Continuity between generations is also maintained through the continued engagement with objects, materials, and spaces that members of past generations have worked with— and such work reminds us of the cultural wealth that is contained within our communities.

—Nadia Jackinsky-Sethi is an art historian at The CIRI Foundation in Anchorage, Alaska.