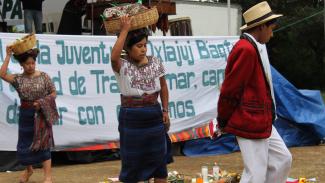 December 21, 2012, the end of the Oxlajuj B’ak’tun cycle of 5,128 years—not the end of the world, as commonly, falsely interpreted—is fast approaching, and for Maya in Guatemala, that means it is time to start celebrating. To commemorate Oxlajuj B’ak’tun, the Waqib’ Kej Indigenous Youth Council held a festival of art, music, and dance on September 22 on the grounds of the ancient Maya city of Iximche, outside modern-day Tecpan, Guatemala. Iximche was the capital of the Kakchiquel empire, founded in 1465 and part of what archaeologists term the post-classical period of the Mayan empire. As Alex Ulul, community guide at the ruins, explains, “Post-classical is the term archaeologists use, but that implies an end to Maya civilization. We measure time in b’ak’tun. This city was built at the end of the 11th b’ak’tun.” Oxlajuj, meaning 13, is the last b’ak’tun. According to Maya priests, the next cycle begins again at 1.

The festival also marked the conclusion of a two-day conference for Indigenous youth focusing on a re-establishment of the State of Guatemala in this new era. “We have thought deeply about the reality that we’re living, and what we can propose to the state of Guatemala. We demand real change in this country,” said a presenter at the opening of the festival.

Indigenous artists, musicians, poets, and dancers gathered from across the country to represent, via artistic expression, what Oxlajuj B’ak’tun means for them. Eduardo Santiago Reyes, from San Juan Comalapa, won first place for his painting about Maya spirituality and hardships. “I am so grateful to have the chance to be here. Being involved in this movement and painting about these topics has been a huge challenge to me,” he said.

Reyes’ father forbids him from painting about injustices Indigenous Peoples have faced out of fear of repercussions. “Talking about these issues is like a death wish,” his father has told him.

But Guatemala’s Indigenous youth are ready to take on this challenge. “It’s our turn to construct a new government,” said Reyes. As a result of the conference, youth leaders published a statement demanding a state that reflects the multi-lingual and multi-ethnic Guatemala that Indigenous youth live in today. “Along this long historic path of struggle and resistance, we, Indigenous youth, are discussing, deliberating, and articulating our struggles, on the eve of Oxlajuj B’ak’tun, as a moment for a new dawn for the people,” the statement begins. A musician summed up the sentiment at the festival: “Seeing this many young people, working together for positive change for Indigenous Peoples in our country, gives me an incredible hope for this new era.”