A Call to Action: Catherine Murupaenga-Ikenn 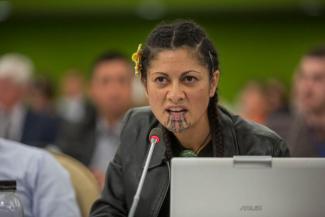 Māori activist Catherine Murupaenga-Ikenn is no stranger to the international Indigenous rights movement. She is often heard and photographed making moving and passionate interventions, calling on Pacific countries to respect Indigenous rights. Murupaenga-Ikenn hails from the iwi Māori of Te Rarawa and Ngāti Kuri in Aotearoa (New Zealand). She is an executive member of Te Rūnanga o Te Rarawa, the governing authority for her Te Rarawa peoples, and a member of the Ahipara Komiti Takutaimoana, a committee that manages the customary fisheries and coastal environment interests of traditional family groupings of her village of Ahipara. She was also an iwi negotiator for the Ngāti Kuri Historical Land Claims Deed of Settlement with the Crown. This extremely important settlement returned to Ngāti Kuri thousands of hectares of traditional lands and cultural sites and other redress for Crown violations of Ngāti Kuri’s rights under Te Tiriti o Waitangi (the English version is the Treaty of Waitangi) signed with the Crown in 1840.

“I’m often thinking about the juncture between this political world and campaigning back home, about advice on working for the rights of our peoples,” she said in a radio interview with Cultural Survival at the 14th Session of the UN Permanent Forum on Indigenous Issues. In a struggle against what she refers to as “juggernauts of corporates,” it is important to connect with networks of people, including NGOs and faith-based groups.

To understand how Indigenous Peoples could win against the powerful, wealthy forces that threaten their ways of life, Murupaenga-Ikenn referenced the book David and Goliath by Malcolm Gladwell. “It talks about the underdog going up against the big dude, and for us to critically analyze the Achilles heels and the weaknesses in those big powers,” she said. “When you look at them, they do have weaknesses. We just got to figure out what they are and use all the potential we have. And we have so many strengths. We have to galvanize those strengths, and one of those strengths [is] numbers, of course. We are the citizens of our countries, and citizens [need] to stand up whether you’re Indigenous or otherwise.”

The business sector, Murupaenga-Ikenn said, is another potential source of support—and crucial funding—for Indigenous Peoples. Socially minded businesses as well as philanthropists from wealthy families can make powerful contributions to social and environmental causes. “There are people out there. Go actively looking for them,” she urged. When asked about her thoughts on consumerism, consumption of oil, and individual responsibility to solve environmental problems, she responded, “We as Indigenous Peoples, actually all humans, should take responsibility for being stewards of a kind.” But, she continued, “We, Indigenous Peoples are not just stewards—we are in a family that has connections with Mother Earth and Father Sky. And so we are part of the bigger family. We are in it. And we are part of nature.” This connectedness with the natural world makes environmental issues, and the harmful risks of oil in particular, a “life and death situation.”

Murupaenga-Ikenn did not mince words about modern value systems that ignore the environment, calling them consumerist, competitive, and destructive. If it’s true that money can’t buy happiness, gross domestic product may not be an effective way to measure a country’s progress, and indeed, Murupaenga-Ikenn believes that this system is deeply flawed. “[GDP] only values those things that consumers can put a dollar sign on,” she said. “You know, the marketplace, if you look at it, can’t value things like love. Even your health, well being, even your community’s sense of security and harmony, and our environmental well being—all those things Indigenous Peoples value—the GDP system [as] a measuring stick cannot.”

Instead, Murupaenga-Ikenn argues that countries must shift to what she called a “true well-being index,” where a healthy environment is one key factor. “When the environment is degraded anywhere in the world, the Indigenous Peoples are also suffering,” she said. This shift to a more environmentally conscious value system should take place not only in national policies, but also at the local level: “Communities need to have their own value systems . . . families need to have their own value system. It all comes back to the individuals at the end of the day. What are our values?”

To effect change at the individual level, there is no better place to begin than in schools. Children, said Ms. MurupaengaIkenn, must “understand the importance of human rights and treating their fellow humans in the environment with dignity and respect,” and school curriculums must include these subjects. “When that platform is solid, you’ll see a whole lot of transformation happening,” she said. “But it’s just not happening in schools, unfortunately. So I encourage people to go and champion that transformation at a school with all young people.”

One of the most important issues Murupaenga-Ikenn called attention to at the Permanent Forum was deep sea oil drilling. She pointed out that such drilling could pose a threat to marine life as well as the many Indigenous people who depend on that marine life for food. For Murupaenga-Ikenn’s peoples, the coastline is a spiritual pathway for those who have passed away, making pollution from deep sea oil drilling an “incomprehensible” spiritual threat. Oil drilling is also contributing to climate change—an issue that has been a “big ticket item” at the United Nations. “We know fossil fuels and carbon-based fuels, greenhouse gas emissions, and all that sort of thing [are] directly related to oil production . . . don’t give any permits for exploration, for crying out loud. And at the same time, really ramp up the renewable energy production infrastructure and ensure the legislative policy regimes back home. Help the average person to use renewable energy,” she implored.

Murupaenga-Ikenn also focused on the importance of the Pacific Ocean, naming the problems of sinking States due to rising sea levels, depleted fisheries and food sources, and the nuclear disaster at Fukushima and the immense dangers nuclear energy poses to oceans. Radiation from Fukushima, she said, has a flow-on effect, and the harms it causes to the northern Pacific will eventually affect the southern Pacific as well. “Does anyone have an exit strategy if [we] decide we want to get out of nuclear?” asked Murupaenga-Ikenn. “No! Nobody had one. They didn’t think about if there was an earthquake, like in Fukushima. What happens if the nuclear power plant is broken and all this radiation gets out? Do we have a mop-up plan? Is there an international organization that’s dedicated to going in there and fixing it up and locking it down? No. Nobody thought about that.” When disasters strike, Indigenous Peoples are often the most affected. For geographic and economic reasons, she explained, Indigenous Peoples simply “don’t have the capacity to just uproot and go and relocate to some other place.”

Among Murupaenga-Ikenn’s successes at the United Nations was helping to achieve a more internal focus among Indigenous delegates. In past years she has focused on communicating with the UN and with government officials, but this year, she said, “We’ve taken conscious, intentional steps towards creating a regional mechanism for the Pacific.” Murupaenga-Ikenn also supported a proposed funding group for Indigenous Peoples inspired by an effective coordinating committee at the World Conference on Indigenous Peoples. “We need a strategy and it can’t just be about a strategy inside the UN, because we have been banging on their door for so long and they keep pushing us back. We will continue with that, but we need our own Indigenous strategy,” she said. Such a strategy would indubitably involve Indigenous people writing history for themselves: “Let’s talk about strengthening ourselves and our self-determination, strengthening our sovereignty. Let’s use that language."