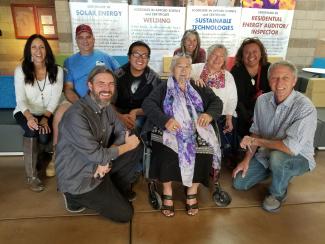 Forty-plus years of activism for environmental justice, Indigenous rights, human rights, and conflict resolution or reconciliation have taken elder Pauline Tangiora (Ngāti Rongomaiwahine) from her small community on the Māhia Peninsula of the North Island of Aotearoa (New Zealand) across the world to places as far flung as Mexico, where she has faced down militaries with Indigenous community members; Iraq, where she has comforted child victims of chemical weapons attacks; to the United Nations in New York and Geneva, where she advocated with the San from Botswana, all while supporting her own people in their fight for their ancestral land. Though there are few places she has not traveled to, Tangiora maintains she is most at home in Māhia: “When I come under the railway bridge and look across to Māhia, I think, ‘I’m home’.”

Tangiora traces her call to justice to an incident she experienced as a young girl in primary school. “A quiet boy was sitting in the field having his morning tea, and these two girls came up to him and belted him. I went up to them and said, ‘You do it again to him and I will do it to you.’ We have to stand up for people who cannot stand up for themselves,” she says. Tangiora has a blended family of 14 children, 52 grandchildren, and 10 great grandchildren. She recognized that maintaining the balance between traditional values and a modern life were critical to the survival of her culture, and equally so for the protection of the environment. She resisted receiving a ta moko (tribal marking) until she was in her fifties because she understood the cultural responsibility and significance associated with it. Ta moko is a sign of cultural identity and a reflection of the general revival of language and culture; having one means you have a great responsibility to your community in service. Tribal members are part of the solution and see the value in engaging the youth in positive activities and learning opportunities. At the same time, there is a deep sense of investment in the wisdom and knowledge that the elders carry.

Tangiora is one of three activists recently presented with the prestigious International Bremen Peace Award from the Schwelle Foundation in Germany. Kate Dewes, who has worked closely with Tangiora in her role as director of the Disarmament Movement and Security Centre in Christchurch, New Zealand, calls her “the leading kuia [Māori female elder] in the peace movement globally.” She is former president and current vice president of Women’s International League for Peace and Freedom Aotearoa; former regional women’s representative for the World Council for Indigenous Peoples; and a former Earth Charter commissioner. Currently Tangiora serves as ambassador to the Earth Council International and the 13 International Indigenous Grandmothers’ Council. She is also a member of the World Futures Council and the Māori Women’s Welfare League, and a patron of the Peace Foundation.

Though she is a global citizen in the truest sense, some of Tangiora’s biggest accomplishments have come closer to home. Māhia is a small, rural community, economically depressed at one of the farthest points east on Earth. There has been a long-running land rights battle with the Crown for its abuse of rights and confiscation of Tribal lands. Tangiora was one of seven negotiators in the recently completed treaty settlement of $100 million NZD and social assistance package that came with a formal apology from the Crown in 2016. The Tatau Tatau Ki Te Wairoa administers the trust settlement on behalf of the beneficiaries, of which the Tangiora's Tribal community of Rongomaiwahine iwi are a part. These are primarily fisherpeople, and whales are sacred to their culture. There are currently over 4,000 claimants to this settlement. More than 30 years ago, Tangiora spearheaded such a campaign. This was an especially contentious battle because the Crown played a critical role in the outbreak of war and was known for its use of scorched earth tactics, which it ultimately acknowledged devastated crops, livestock, and food supplies. Consequently, generational and historical trauma continues to plague many Tribal people.

The land rights settlement has proven to reap rewards far beyond the financial: as economic burdens have been eased on the families, children have begun to explore their history from an Indigenous perspective. The past is remembered, but not dwelled upon. Ancestors are honored and revered for their role, especially Te Whiti o Rongomai, a Māori spiritual leader and founder of the village of Parihaka in New Zealand’s Taranaki region, who gave the world the passive resistance approach to fighting injustice famously adopted by Mahatma Gandhi. A renewed sense of cultural pride indicates progress. The Rongomaiwahine were forced to interact with the iwi and hapū (named divisions of iwi) of Te Rohe o Te Wairoa during these negotiations, despite their differences. “We are an iwi in our right, so it was a tough process working together,” Tangiora says, adding, “It is time to move on. We can’t let it rule our lives anymore. But history must be told of why Māori feel resentful after their land was confiscated. Pakeha [white New Zealanders] seem to think we have a lot of money, but that money needs to be used wisely. The trustees have to come together to decide how the people want to use the money for the people.”

Another part of Tangiora’s advocacy efforts has been her work in the prison system for almost 50 years. She was instrumental in getting books for prisoners into prisons and has worked as an advocate about the effects of Māori children who have been in State care. “What worries me is the people who are left in there for 20 to 25 years, without any contact,” she says. “Prison is a terrible place to go, but it is also a place of hope. It does not matter if someone in your family has done something; you cannot throw them away. Better they come out knowing you cared enough to visit or write to them every week. A long time ago, I sent a card to a man in prison. Years later, one officer said to me, ‘You know this guy, that card you sent him 20 years ago, he carries around in a plastic bag in his pocket, and sometimes you see him sit outside and read it.’” More than half of the 8,000 prisoners currently incarcerated in New Zealand are Māori. Due to the lingering effects of colonization, most have issues with literacy, substance abuse, or come from a dysfunctional family with generational unemployment.

Given the wealth of her experience and the extent of her advocacy work, it is no surprise that Tangiora is a sought-after speaker and representative at conferences and forums all over the world. On this global stage, she shares the traditional wisdom and knowledge of the Māori people while learning and sharing best practices from other communities who are experiencing similar issues. What keeps her going is her passion to leave the world a better place for the children and grandchildren. “Working in peace is hard work. But there are also many wonderful things: the friendliness, kindness, and warmth of people, and the trust they put in me.” Speaking to the children of the world, Tangiora encourages, “dream a dream, and you will get there, but it won’t come without hard work. If the world supports each other, it would be a better place.”

—Kim Langbecker is an event producer and strategic development consultant working with social benefit organizations, and a partner in Terra Global Solutions, a B Corp that provides solutions for a sustainable future.