Breaking Barriers: Indigenous Women Participate at the 59th Session of the Commission on the Status of Women 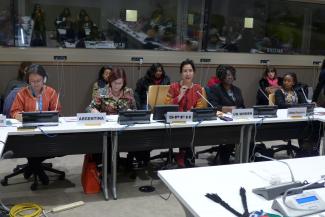 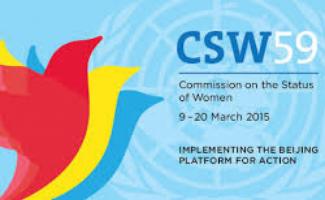 “Fears and tears bound women (and some men, too), Shackles that need to be broken. Together in harmony and peace we can live, If we open the path for man and woman to walk hand-in-hand, If our mat welcomes both to sit together as equals, When we do not leave anyone behind, All together we can move forward to a life of bliss.”

More than 30 Indigenous women participated at the 59th Session of the Commission on the Status of Women (CSW 59), also known as Beijing+20, at the United Nations. The International Indigenous Women’s Forum (FIMI) actively participated and supported the advocacy efforts led by Indigenous women from the Americas, Asia, Africa, the Arctic, and the Pacific, bearing in mind the Fourth World Conference on Women organized in Beijing, China by the United Nations; reaffirming the advancements achieved during the past 20 years in terms of political advocacy at an international level; and demanding more actions to be taken to ensure the full exercise of Indigenous women’s rights. Participation included organization of side events and presentation of political statements such as marching, lobbying, and engaging in the Regional Women Caucuses.

The International Indigenous Women’s Forum is an organization that brings together Indigenous women leaders and human rights activists from different parts of the world to coordinate agendas, capacity-build, and to develop leadership roles. It followed a delegation of Indigenous women from different countries including Argentina, Cameroon, Nepal, Philippines, and Sudan. Sisters from Costa Rica, Ecuador, Guatemala, Kenya, Mexico and Peru, among others, were also part of the delegation. The session opened on the morning of Sunday, March 8, International Women’s Day. Agnes Leina, an Indigenous woman from Kenya and founder and executive director of I’llaramatak Community Concerns, spoke on the urgent need to implement the UN Declaration on the Rights of Indigenous Peoples. She also emphasized the need to consider the demands of Indigenous women at the global level as stated in the Lima Position Document and Plan of Action.

In the afternoon, Indigenous women from Asia, Latin America, and Africa gathered for an initial coordination meeting at UN Church Center, where Mirian Masaquiza (Quichua) from the Secretariat of the UN Permanent Forum on Indigenous Issues, and Eleanor Solo, a former UN Women official, provided an introductory overview on advocacy strategies. After the session, some of the participants joined the March for Gender Equality and Women’s Rights organized by UN Women. Each day the delegation of Indigenous women convened coordination meetings in the UN lobby, exchanging their experiences and organizing activities and ideas for the day.

On March 9, FIMI organized a press conference on Indigenous women at UN Headquarters. It was an empowering experience for Winnie Kodi (Nuba) from Sudan and Maribeth Biano from the Philippines, two young Indigenous women attending CSW for the first time thanks to a UN Women scholarship. One of the speakers, Tarcila Rivera Zea (Quechua), president of FIMI, ECMIA, and Chirapaq, stressed Indigenous women’s key demands at CSW 59. She called on the Commission to focus on the empowerment of Indigenous women at future sessions by way of collecting disaggregated data by gender and ethnicity; paying special attention to violence specifically committed against Indigenous women; promoting their political and economic advancement; and considering the rights of all Indigenous Peoples in the elaboration of the post-2015 Development Agenda and Sustainable Development Goals.

On March 11, FIMI convened a second session to share the results of research conducted in partnership with the Association of Women Rights in Development and International Funders for Indigenous Peoples on the question of funding for Indigenous women to organize. It was a space to share knowledge, experiences, and concerns. As an outcome of this session, the soon to be published research will include specific case studies illustrating its findings. The following day at midday, the side event “Political Participation of Indigenous Women: Leadership and Good Governance” was convened at the Salvation Army, followed by another side event sponsored by FIMI and co-organized by Tebtebba and Asia Indigenous Women’s Network.

The event on political participation focused on the results of a research study on political participation of Indigenous women, showing the challenges that they face for full and effective participation and the different ways they participate at the community, local, national, and regional levels. The results were presented by FIMI Program Coordinator Mariana Lopez and commented on by Begoña Lasagabster, acting head of the UN Women’s Policy Division; Rose Cunningham, director of Wangki Tangni in Nicaragua; Lucy Mulenkei, executive director of the Indigenous Information Network; and Chanda Thapa Magar, regional Indigenous Women Program Coordinator for Asia Indigenous Peoples’ Pact, all of whom helped shed light on the achievements, challenges, and next steps to enhance awareness on Indigenous women’s participation throughout the world.

By the end of the first and most intensive week of CSW, FIMI convened another side event at the UN in partnership with the Secretariat of Permanent Forum and the International Fund for Agricultural Development on the implementation of the Beijing Declaration and Platform of Action. It was also the occasion to present the results of the “20-Year Review of the Beijing Declaration and Platform of Action and Beyond: Framework to Advance Indigenous Women’s Issues,” prepared by the secretariat of the Permanent Forum. Lakshmi Puri, assistant secretary general of the UN and deputy executive director of UN Women, gave the opening remarks centered on the key role that Indigenous women have as protagonists of the change in the social, economic, and political spheres. María Cristina Perceval, permanent representative of Argentina to the United Nations, expressed her commitment and insisted on the need to overcome the gap between the inter- national instruments and the real implementation at national level. Victoria Tauli-Corpuz (Igorot) and Rivera Zea high- lighted the progress made at the local, national, and inter- national levels, and also showed concern about the structural racism that still permeates the system and represents a barrier to the full exercise of Indigenous women’s human rights. To conclude, Gambo Aminatu Samiratu (Mboro), women’s coordinator at Lelewal Foundation in Cameroon, called on the Commission to consider the issue of empowerment of Indigenous women at a future session.

The Ivonne H. Fellowship, sponsored by UN Women, enabled participation of young women who were attending CSW for the first time. Five Indigenous women were sup- ported this year with that fellowship, including Samiratu, who shared her perspective on gender equality in an interview with UN Women: “I think that to achieve gender equality we need to take proactive measures to train and place women in positions of political power while meeting their various needs and sensitizing the entire community about women’s rights and gender equality. To do so we need to focus on the social trans- formation required to eradicate poverty and employ the most marginalized and excluded peoples, such as the Indigenous and local communities, by removing all barriers to women’s empowerment.”

Indigenous women’s participation at CSW 59 showcased the many efforts that have been made toward removing these barriers, evidenced by various meetings with governments and coordination of advocacy to demand that the empowerment of Indigenous women be considered as an emerging theme at CSW 60 in 2016. To this aim, a position document was presented by Dali Angel (Zapoteca) during the second week of the session. The document is one piece of an advocacy road map that is already being developed. It is a long road to be sure, one which will continue during the upcoming Permanent Forum and beyond, so that Indigenous women’s voices are heard and their rights are fully exercised.

All photos courtesy of FIMI
Image One: Voices Indigenous women were heard at the CSW side event "Beijing+20."