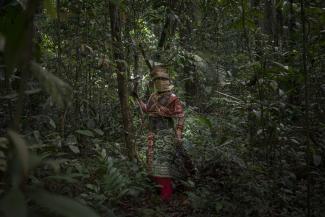 Emerson Uýra is a young artist, scientist, and educator of Indigenous ancestry from Mojuí dos Campos, Santarém in the Amazon. Through his drag persona, Uýra Sodoma, Emerson Uýra blurs the lines between human, animal, and plant. Out in the streets of the Amazonian city of Manaus, Brazil, or in the sterile space of the art gallery, Uýra mesmerizes audiences with his disrupting of colonial narratives of wilderness, gender, and environmental destruction. A visual artist and human rights activist, Uýra is also a biologist with a masters degree in ecology. Whether he is inhabiting Emerson or Uýra Sodoma, he is pushing for diversity, rights, and racial justice. Cultural Survival recently spoke with Uýra.

Emerson Uýra: I talk about life in my work, about the violations of those lives, about the beauty, the potency, the manifestations of all lives—not just the life of the forest, but of human life as well, the beauty that we are walking through. I move from academia, from scientific research, and I bring a lot of that to my artistic practice telling natural stories about animals, plants, our Indigenous stories, stories about our people from the periphery, about LGBTQ2S (Lesbian, Gay, Bisexual, Transgender, Queer, Two-Spirit) people. 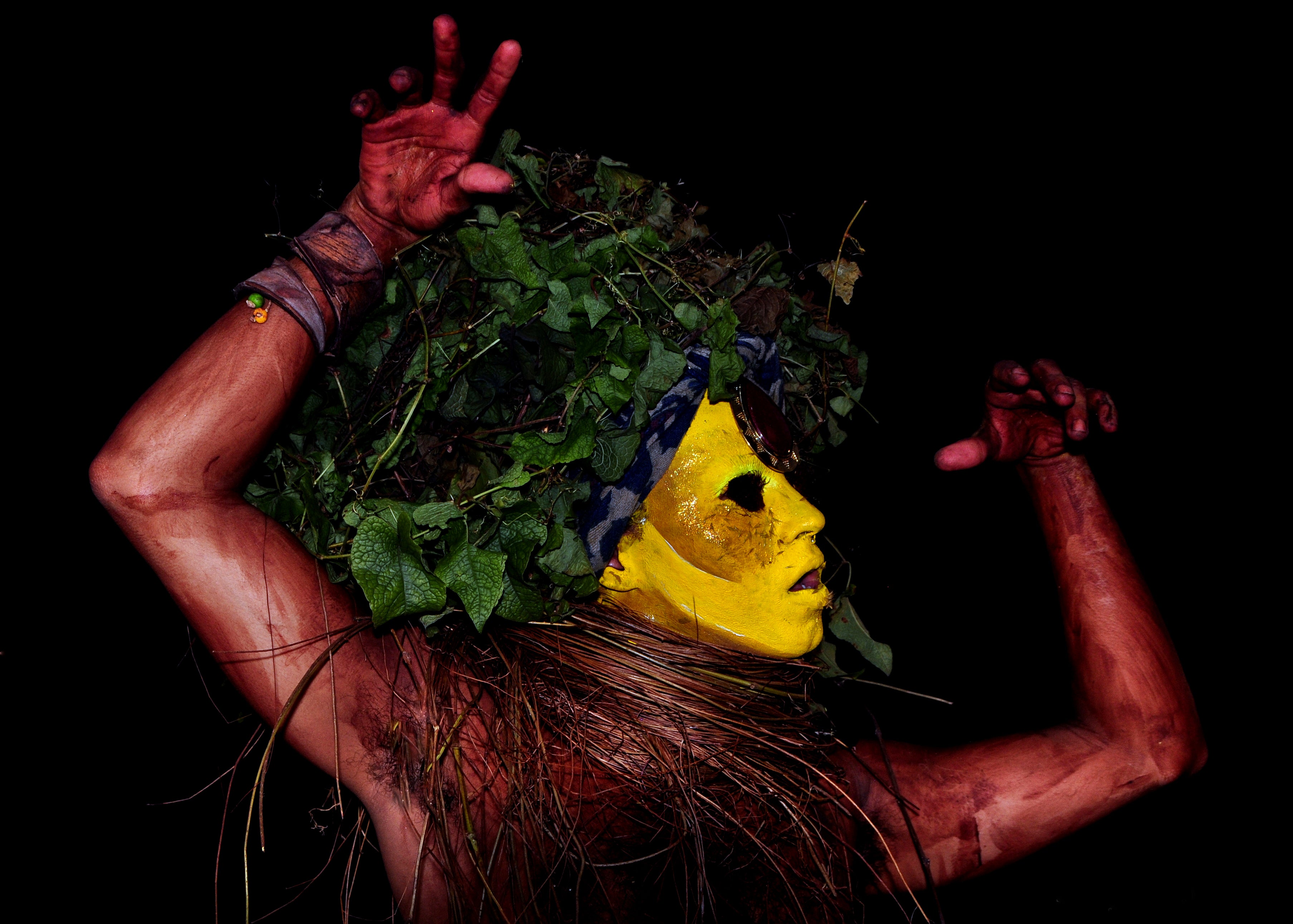 Uýra visits villages along the Amazon River to teach residents about the importance of conservation. Photo by Selma Mai.

Cultural Survival: How did you begin as Uýra?

EU: Uýra emerged in 2016 after a coup d’état in Brazil. I was living with artists who were protesting [and] I began to see myself as an artist. Since then, I have been taking on a presence that is a hybrid of animal and plant. I adorn myself with leaves, branches, seeds, everything that is part of us, because we also are nature. I invite these elements of the forest together with my body. And there we have Uýra: this presence in this entity of plant and animal flesh. I like to see Uýra as a tree that walks within the cosmovisions within the way that Indigenous Peoples from many places come; from there come the transformations. We transform many things within these visions into animals, and animals become people. A tree walking breaks the Western, Eurocentric, colonial imaginary that envisions trees as stationary, motionless organisms. By turning into Uýra, these rights of the walking trees are like the Indigenous bodies that have always mobilized us and moved independently of colonialism.

CS: Do people react differently to your performances depending on the space? 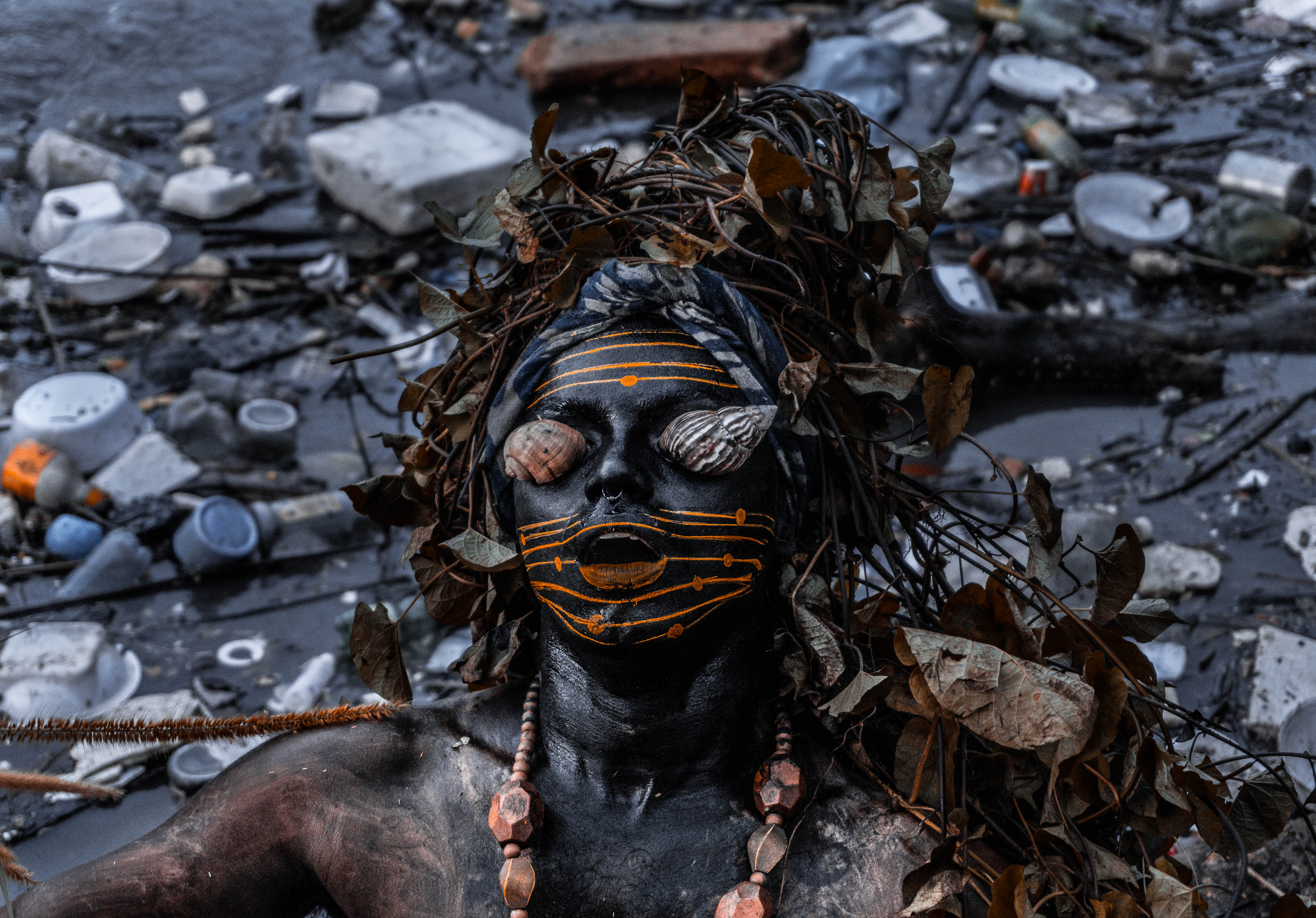 Uýra, “Mil Quase Mortos (Boiuna)/One Thousand Almost Dead.” Dressed in a costume made entirely of natural materials, Uýra stands against a backdrop of a river contaminated by plastic waste. Photo by Matheus Belém.

CS: Please describe one of your most memorable performances.

EU: I perform photo performances, so I go with a photographer to a chosen site. For example, the city of Manaus where I live, I situate myself, I receive Uýra in my body, and there I pose, interacting with this environment. All that is photographed. I’ve been doing photo performances since 2017 and I’ve experienced many interesting moments because they’re usually in open places where people of all genders, ages, races, and classes pass and react. A highlight moment was in 2019 when I became a snake with a tail of 10 meters. It was the snake Boiuna, which is close to the mother of snakes here in the Amazon. I turned into Boiuna there in a stream in Manaus. The stream was polluted, full of garbage, and a bridge passed from one side to the other over this stream. Hundreds and hundreds of people passed on that bridge during that afternoon and I was down there lying in the garbage. And that was really interesting, because people reacted a lot. They took many pictures and videos. There were people who cursed. There were people who praised me, who started talking about the state of the stream. In one or two hours of photo performance I found that the stream received more attention than it had received for a long time. They are accepted as natural things, which is an invisible disgrace, and it was interesting to encourage this mobilization, this conversation, this reaction of people to space.

CS: Why do you enjoy performance art, specifically?

EU: It just happens. Every child is born a performer. Mothers tell me that children already use their bodies to tell narratives. This is performance art. Since childhood I used to glue things on my face; I took a little leaf to see how it fit along with my body, it was a kind of spirit saying, “you’re a leaf too, huh? We are also Forest.” I really like to inhabit and swim through this manifesto that this expression uses the body. It is something that I have come to understand every day as a power that exists within not only the Indigenous worlds, but also the non-Indigenous worlds as a tool for dialogue, including communication between these different worlds. I transform into Uýra to transit. Transformation to communicate. 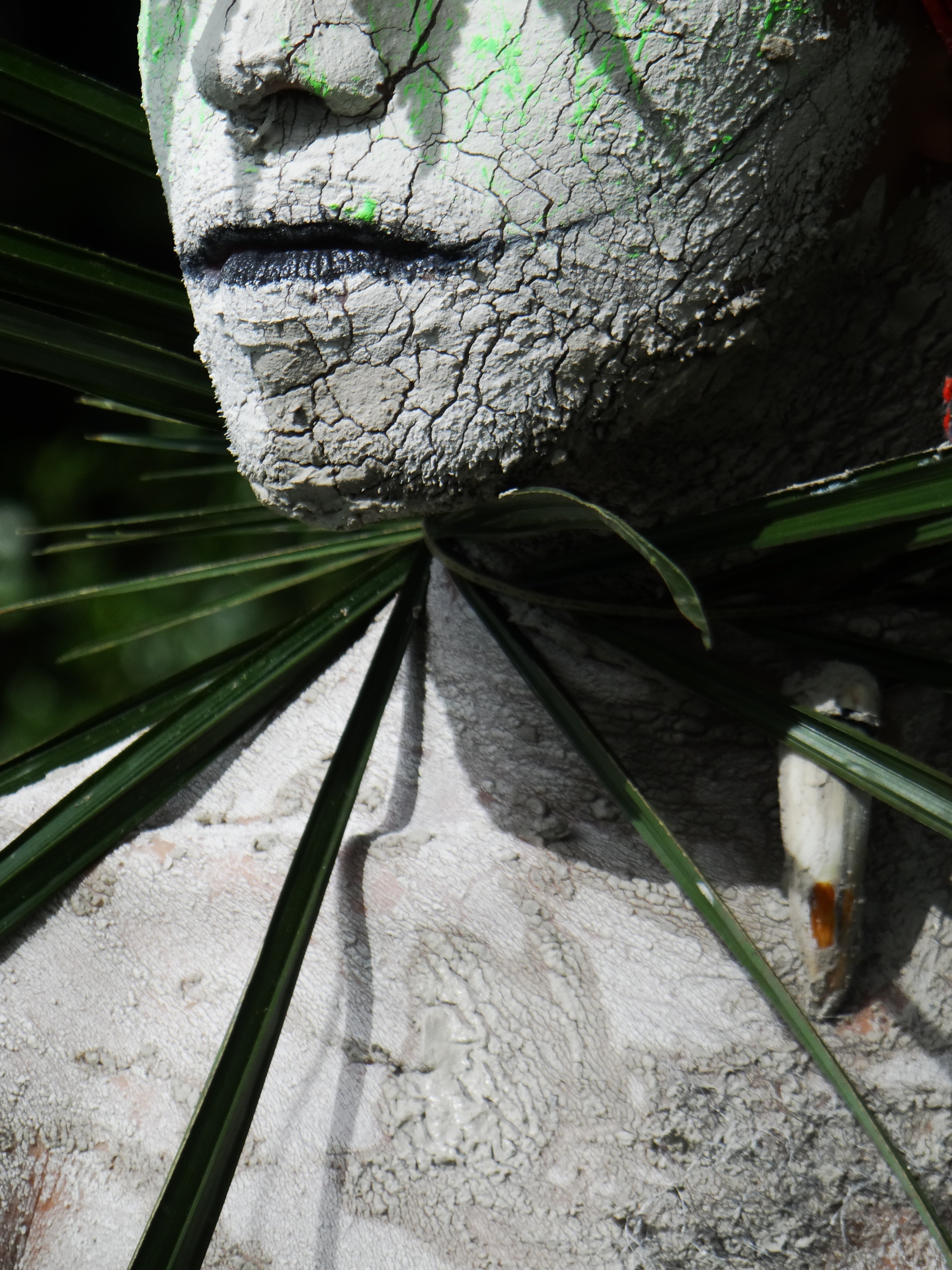 CS: How is your art a decolonizing practice?

EU: I move with an anti-colonial perspective. Since picking up leaves to put on my face, I claim that we are also nature. The Western, Eurocentric view has for a long time made a point of separating nature and culture. For us Indigenous Peoples, nature and culture are the same thing. We are nature with culture. We have culture and our culture is the forest, a living forest. There is no distinction between us. Things are alive, they are sisters, they are all daughters of the same grandmother. I claim that place too, in a non-human, non-anthropocentric, hybrid way. I communicate directly by exposing these colonial diseases in my work, and also ways to cure these diseases. So there are several direct anti-colonial manifestos present in my work. And each day I learn to do this better.

CS: What is the relationship between your work as a scientist and Indigenous knowledge of ecology and conservation?

EU: I am an environmentalist, whether through academia or as an Indigenous person. I want the forest standing. No future is possible without the Amazon. I spent six years researching and publishing international scientific articles in major journals around the world, always guided by the knowledge I already had before the academy about the forest, about the spiritual licenses that need to be applied for in order to enter the forest. I decided to take a break from academia precisely because I was tired of being a researcher and seeing an animal as an object. The animal is my relative. If he wants to say something to me, he’ll tell me, and if he doesn’t want to, he won’t say it. 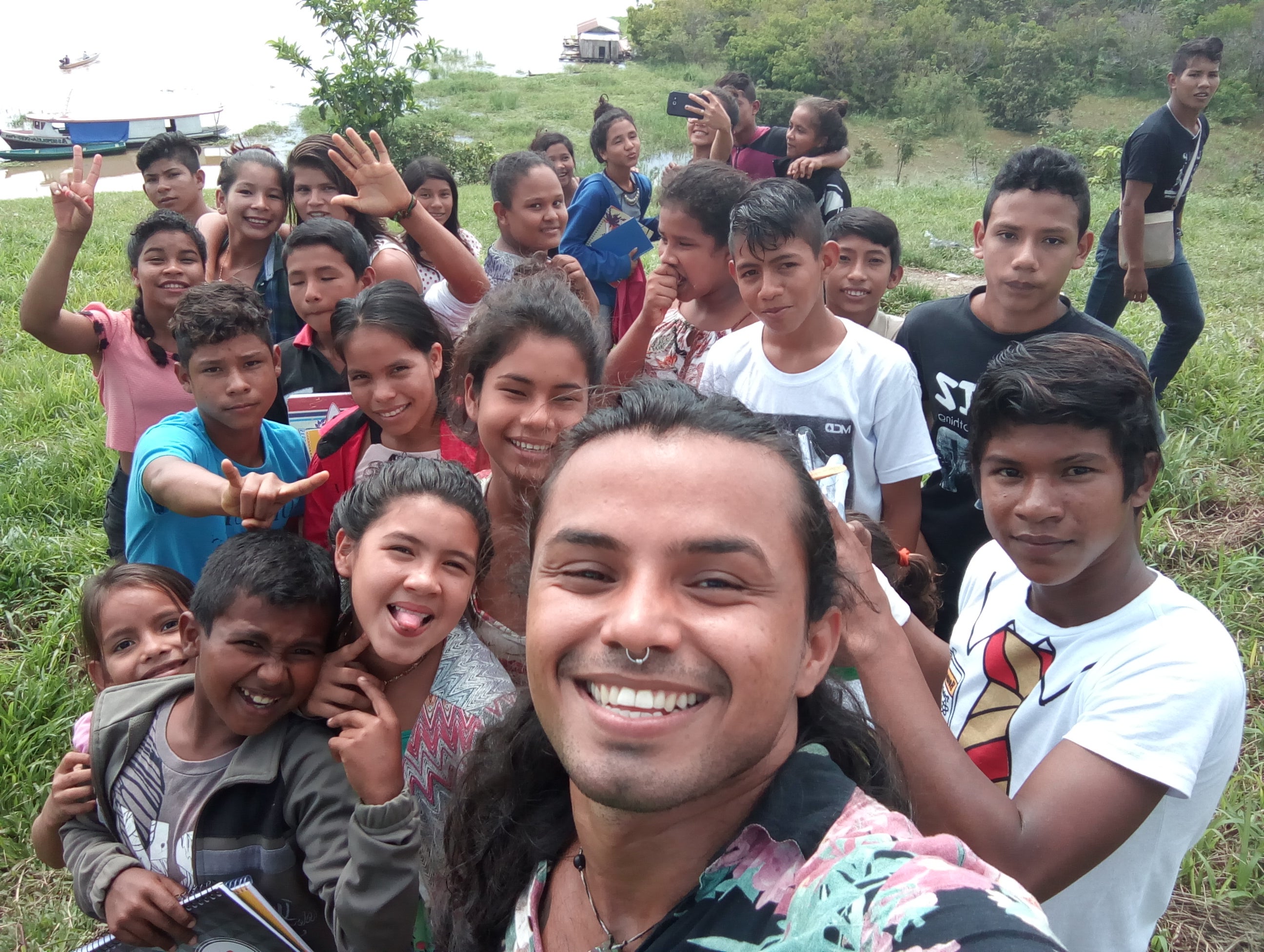 CS: What difficulties do you encounter as an artist and as an Indigenous person in Brazil?

EU: The art system in Brazil still has a very European perspective; a very minimalist, well-sanitized view of art, not popular art. I’m an Indigenous, non-binary person from the periphery, and what I do, there’s nothing minimalist about it. It’s exaggeration, it’s popular culture. Entering this space of this high culture, institutional spaces, only happens because there is one curator or another or a project that is trying to get out of these boxes. Then it facilitates our dialogue and I just build from that.

As never before, contemporary Indigenous art in Brazil is highly relevant and has more and more visibility in terms of communication between worlds. Many contemporary Indigenous artists in Brazil sell by working as a collective to build something important that revises years of modern science that talked about us without us. I’m one of those artists who was pushed by this movement, conducted as a political, artistic, spiritual mission to occupy these spaces with our Indigenous narratives, which are important for the world to hear. What we hope for today is the fall of President Jair Bolsonaro in Brazil, and that it will happen soon because he has already killed many of our people in Brazil. More than 500,000 people have already died because of COVID. We are ready for the fall of this neo-Nazism that exists within Brazil today, which affects the life directly not only of Indigenous Peoples, but of the entire population.

We, in Brazil, are moving right now through a series of bills that come to overturn the rights that Indigenous Peoples have gained, which are already insufficient. It has only been since 1988 when the Federal Constitution was enacted in Brazil that Indigenous people became legal Brazilian citizens. And only since 1991 has the word ‘Indigenous’ been entered into the demographic censuses. Until then, the State insisted on confusing and disguising the identity of many relatives. Now, in 2021, there is a project that will worsen our rights, PL 490, which will remove the demarcation of Indigenous lands. That is one of the most shameful blows this state has again done against the Indigenous Peoples.

[Still], I want to emphasize the importance of hope. It is important to understand that colonialism never ended, and with these policies of disgrace they continue to reign. Indigenous Peoples, Black people, trans people, LGBTQ2S people, and racialized people of all forms, people from the periphery of social movements, teachers, we’ve been here for a long time. So let us not give up. I have hope for the art system, because there are several movements today that are identifying themselves as anti-colonial, as anti-system, so that we can walk towards a better future, a future that is not so elitist, so homophobic, so racist. Because it is like that, we still are. But we have paths of hope.