The Birthplace of the Winds: A Cautionary Tale of Climate Change on St. George Island 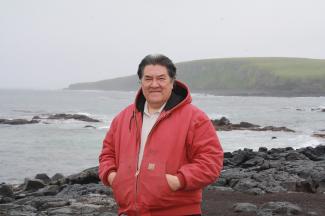 Climate change is real. I seek help for my Unangan (Aleut) People of St. George Island, one of the Pribilof Islands of the state of Alaska in the Bering Sea off the western coast of the state. The island has a land area of 35 square miles and a population of about 100 people, all living in its only community, the city of St. George, which encompasses the entire island.

The story of our island is inextricably linked to the Russian fur hunters of the late 18th Century who were looking to replenish their stock after the sea otter declined in the Aleutian Islands. St. George Island was “discovered” by Gerrassium Pribylov in 1786, and was the largest fur seal breeding ground in North America. It was initially settled by 137 Unangan (Aleuts) from Atka and Unalaska on the Aleutian Chain. These initial settlers were to oversee the breeding and harvesting of the fur seals for the lucrative fur trade. The Unangan, who were known as the “people of the seal,” could not leave the island without the permission of the Russian czar; their status has been described as serfs or slaves. In 1867, when Alaska was purchased by the United States from Russia for $7.2 million, conditions at St. George remained unchanged.

Slavery of our people did not end until 1983, when the US government did not renew the treaty with Russia, Japan, and Great Britain on behalf of Canada that called for the cessation of pelagic sealing (killing seals on the high seas). That year, Congress passed The Fur Seal Act Amendments, which was signed into law by President Ronald Reagan. That Act specifically called for the transitioning of our local economy from killing seals to commercial fisheries. More than 30 years later, this transition has yet to be accomplished due to a lack of a functional boat harbor, no fish allocation, no boats, or proper infrastructure. Our government, federal and state, has yet to fulfill its promises to our people. These practices are not acceptable for a country that prides itself on human rights. Our government formally endorsed the United Nations Declaration on the Rights of Indigenous Peoples in December 2010, yet our human rights continue to be violated. Is this racial discrimination? Absolutely.

The United States entered into a treaty with Russia, Japan, and Great Britain on December 15, 1911. This action abolished sealing on the high seas and was heralded as one of the most successful conservation measures in the world, saving the fur seal herd from extinction. Today, the fur seal herd on our island are not afforded the same concern and protections. Nor is the seabird population. Today, the problem is food stress. Lactating female seals must leave our shores to replenish their food requirements from fish. The female seal has to traverse a longer distance to accomplish this. As a result, she is gone much too long from her newborn pup, thus not able to feed her pup regularly. Inevitably, the pups die on our rookeries due to starvation. The same thing is happening with the 110 species of seabirds nesting on our cliffs. The Unangan people of St. George recognize our moral responsibility and obligation to care for and be good stewards in protecting our animal residents.

Food stress and starvation; we complain about the die off resulting from these conditions. We call for measures to keep destructive commercial fishing practices from taking place near our island so our fur seal and seabirds have sufficient fish prey species to survive, but our calls are not answered. Powerful lobby agents of large fish companies in Seattle are to blame. Our government pays attention to them, not to us. It pains us to be ignored in this matter. Our fur seals and seabirds deserve to live and not starve to death on our island.

The geographic scope and accepted definition of “arctic” is all waters of the Bering Sea north of the Aleutian Island Chain. St. George is the northernmost ice free port. Yet our government has no presence, equipment, or materials to respond to oil spills or emergencies on or near our island. Foreign flagged vessels traverse near our island on their way to and from ports in Europe. This saves the shipping companies millions of dollars in fuel costs, shortening transit time by about 12 days one way. Adding insult to injury, these foreign vessels burn dirty bunker fuel for power. This practice sends billowing clouds of smokestack pollution into our atmosphere, only to have it come back to our seas and enter the pristine waters. This pollution causes an increase in ocean acidification destroying all shellfish, which ultimately leads to the death of marine mammals dependant on shellfish for survival. It is impacting the health of our walrus to the point of starvation.

In a federal government publication from March 2013, “Managing for the Future in a Rapidly Changing Arctic,” an acknowledgement was made about a critical reality: “The Arctic is warming faster than any other region on Earth, bringing dramatic reductions in sea ice extent, altered weather, and thawing permafrost. Implications of these changes include rapid coastal erosion threatening villages and facilities, loss of wildlife habitat, ecosystem instability, increased greenhouse gas emissions from melting permafrost, and unpredictable impacts on subsistence activities and critical social needs.” Indigenous Peoples are paying a heavy price. Villages are, and will continue, sliding into the ocean, or will be overtaken by flooding. Already four such villages are impacted on the Bering Sea coast. We are told, “you choose to live there, so don’t complain.” This is pure discrimination and a violation of basic human rights and moral decency. Every time there is a hurricane disaster, wildfires, or flooding on the mainland, FEMA responds.

I close with this: on May 4, 2012 the UN Special Rapporteur on the Rights of Indigenous Peoples stated in part, “I have heard stories that make evident the profound hurt that Indigenous Peoples continue to feel because of the history of oppression they have faced. This history, widely known but often forgotten, includes the dispossession of the vast majority of their lands and resources, the removal of children from their families and communities, the breakdown of their traditional structures, the loss of the languages, the breaking of treaties, and numerous instances of outright brutality, all grounded on racial discrimination.” Like climate change, this statement is a reality.

— Patrick Pletnikoff is a Unangan (Aleut) born and raised at St. George Island. As a young man he harvested fur seal with his father. He also fished commercially, harvesting halibut throughout the Bering Sea. He is presently the mayor of the city of St. George.