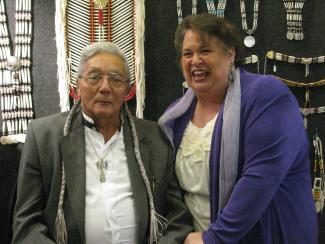 Native art is not just what was in the past; any kind of art has to grow,” explains Amalia FourHawks of the Fire Hawk Studio in Florence, Massachusetts. Amalia and her husband Leonard have been displaying their artwork, which includes jewelry and pottery, at Cultural Survival Bazaars since 2006.

Leonard Four Hawks (Mohawk and Cheyenne) was raised mostly by his grandmother, who taught him about making traditional Native crafts. After serving in the military in Korea and Vietnam and later working as an electrical engineer with the government, he retired in order to devote his time to jewelry-making and leatherwork. As well as being a talented artist, Leonard is an engaging storyteller. He continues to bring Native stories, myths, and legends to children and adults of all ages at the Cultural Survival Bazaars.

Amalia (Apache) grew up in a household that encouraged artistic endeavors. She learned beadwork at a young age, and later became interested in clay and sculpture. She also works with leather and sources from nature such as feathers, furs, and antlers. The Four Hawks’ work now includes Amalia’s pottery and clay sculptures, Leonard and Amalia’s jewelry, and items that they work on together.

They also carry sterling and turquoise jewelry from the Southwest, made by Leonard’s sister, Yvette, and her granddaughters in Arizona. Given Amalia’s emphasis on the fluidity of Native American culture, it is not surprising that she has been creating new designs; she unveiled one of her new lines at this past season’s winter Bazaars. Amalia describes the piece as a “contemporary take on southwest jewelry, a spiral design that drapes around the neck and doesn’t need to be fastened at the back of the neck.” She says that while it’s not a traditional Native American piece, or something you would see historically, “you look at them and you still know that you’re in a Native American booth, and see that the pieces are from the southwest.” She has also been creating what she calls pottery shards, pieces of clay deeply incised with traditional pottery style patterns, that are again a contemporary take on traditional art, pieces “reminiscent of pottery of the southwest.”

Amalia says that she enjoys the Bazaars not only for the opportunity to sell her work, but also to communicate with the public and “educate them about [Native American] cultures.” She says that sometimes even educators think of Native Americans as relics of the past, and children will ask if they still live in huts. Bazaars are also a venue for her to learn about other Indigenous groups, and she loves seeing all the “colors and textures and artistic mediums.”

When it comes to the Four Hawks’ involvement with Cultural Survival, Amalia says that “every year gets better. More and more we see the importance of the work they do; every year we see the absolute veracity of their dedication to their mission.” She calls the Bazaars a “microcosmic example” of the difference Cultural Survival makes: they benefit artists by providing a large outlet with the right demographic for Native art and by not charging a booth fee. While Amalia says she sometimes has trouble attracting customers interested in Native art at general trade shows, the Bazaars bring in her target audience. Cultural Survival is helping “keep cultures alive,” she says. “We have personally seen the impact of their work and know that we want to contribute to its continuation.”