Bazaar Artist: The Man Behind the Masks-- Ujjwal Shrestha 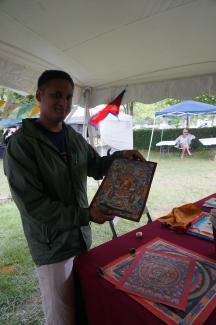 Growing up in Kathmandu, Nepal, Ujjwal Shrestha learned to make paper lanterns from his family. The lanterns are made out of Himalayan Iokta paper, also known as Himalayan Shrubs. By age 12 Shrestha was making paper lanterns professionally, as well as other handmade paper goods like diaries, scrapbooks, photo albums, and wrapping paper. At 14, he learned how to make and paint papier-mâché masks. The family Chidrakar, who are well known for their paintings, taught Shrestha his newfound passion.

The papier-mâché masks are made from clay, glue, paper, and sometimes fabric. Natural colors, primarily bright red, are often used to paint the masks by grinding up stone and mixing the grounds with chemicals. Describing his process, Shrestha says, “I especially like the trick of coating a thin layer of Iokta paper to provide strength to the clay masks before coloring them to bring forth facial expressions of the deities who we worship as guardians of our city walls.”

Papier-mâché masks date back to the 15th Century when the Malla Dynasty ruled Nepal. The Malla rulers presented mask dancing as the cultural and economic force to make the people more involved in following the specific agricultural cycle of the Kathmandu Valley, which is why several festivals are hosted in Nepal in the month of September. According to Shrestha, the Nav Durga mask dance is one of most popular dance festivals. The dance is performed in 21 public squares of the city and in 19 villages of the Kathmandu Valley over nine months. The masks that are used in the festivals are then burned and destroyed to mark the end of the festival. For the next year, the tradition continues and new masks are made for the next festival.

Shrestha’s goal is to create a brand name for his handmade goods and to become more involved in international markets: “bigger markets have more opportunity,” he says. “People are more attracted to foreign products, which are available at cheaper prices in markets.” Shrestha says he relies heavily on tourism in the Kathmandu markets, but the opportunity to sell handmade goods in domestic and international markets will create year-round jobs—giving artisans a chance to make money, create a brand name, and keep the tradition of making handmade goods alive.

Cultural Survival Bazaars promote the handmade goods from the foundation Crafted in Kathmandu, where sacred paintings, masks, and other handmade goods are displayed. Crafted in Kathmandu was launched in 2002 to support artisans and craftspeople living in and caring for historical cities such as Kathmandu. Shrestha says that after Nepal was opened to foreigners in 1951, the performing arts and traditional crafts began to decline and families soon began to pursue different fields due to a lack of buyers and interest in the handmade goods. However, a few artisans and their families stayed and continued crafting because it is a passion of theirs.

Crafted in Kathmandu, which is based in Nepal, is run by Shrestha and other artisans who teach and train others how to make handmade goods through workshops in woodcraft, stone craft, jewelry design, drawing and painting. “They give knowledge to others. Lots of the people who come to these workshops are from an artisan family because not everyone knows how to do all the crafts,” he says. Since the earthquake that devastated Nepal last April, Shrestha and his family are among the thousands of displaced survivors who have been moving around between homes and tarp shelters. “We won’t get local business here due to the quake. The tourism sector is badly affected,” he says. “[So] at this time we really want international support to sustain the artisans and their families.”

For more information on Crafted in Kathmandu, visit: craftedinkathmandu.com.np

Check out our upcoming schedule of Cultural Survival Bazaars at www.bazaar.cs.org.