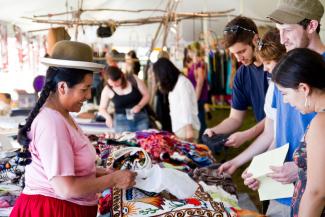 Aymara weaver Felicia Huarsaya Villasante comes from a small community in the Peruvian province of Azangaro about 15,815 feet above sea level near Lake Titicaca. In the 4,450 acre community, residents make their living in myriad ways. Community members raise livestock such as llamas, alpacas, cows and sheep. People in the area cultivate barley, wheat, lima beans, and multiple types of quinoa. A variety of tubers also make up the region’s staple crops, such as potatoes, olluco, and mashua.

Felicia’s community is known for creating handmade crafts. Felicia states, “We are selling our products, different artwork that we—the Indigenous women of Peru—know how to weave by hand.” The female farmers in the area sell weavings as part of a collective. They use only high quality alpaca fibers and sheep’s wool. Felicia sees unnatural acrylics, used in industrialized wool, as possibly harmful to people. “Aymara artisans pride themselves on using 100 percent wool for the production of sweaters, scarves, hats, mittens, and finger puppets.” Felicia and a few other vendors from her community traveled thousands of miles from home to participate in the Cultural Survival Bazaars.

They are looking not only to boost their sales, but also to make new contacts, look for new markets and share their Aymara culture with the American public. In addition to her work as an Indigenous artisan, Felicia has also been involved with the United Nations Permanent Forum on Indigenous Issues. The Forum is held each year in the Spring in New York and provides Felicia and other Indigenous and non-Indigenous representatives a space to network and bring their issues related to economic and social development, culture, the environment, and human rights to the attention of governments. Felicia noted that much of her advocacy work focuses on climate change. She stressed the importance of this issue, “For us, the environment is the only resource. The only bank is our land, air, and water.”

At the Forum, Felicia and other allies seek to not only improve the lives of people in their own communities, but also to give voice to a large number of Indigenous people whose opinions might not be heard. Felicia connected with Cultural Survival during one of these conferences. Members of her community held an exhibition of their hand-woven crafts, and Cultural Survival invited them to participate in the Bazaars and to sell their goods. Ever since, Felicia and her colleagues have been able to reach an entirely new demographic of consumers and inform more people about the issues concerning their communities.

— Hope Ross is a former intern at Cultural Survival

The Winter 2011 Bazaar series raised over $259,196 for Indigenous artisans and their communities. To learn more visit: bazaar.culturalsurvival.org.