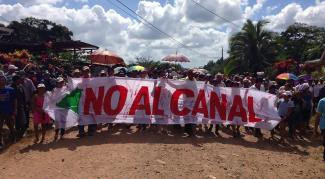 Nicaragua is a multi-ethnic Central American country divided into 15 departments and 2 autonomous regions, the Atlantic North and the Atlantic South. It is also home to the largest freshwater lake in Central America. Despite being a country rich in cultures as well as in biodiversity, Nicaragua currently finds itself in conflict with the Indigenous Peoples of the country. This conflict is due to a contract that was signed with a Chinese company, HKND, owned by business magnate Wang Ying. The contract gives rights to HKND to construct an interoceanic canal spanning the width of the country, three times the length of the Panama Canal. Bill 840, now the “Law of the Canal,” which allowed for this contract, was passed in June 2013. It is being hotly contested among environmentalists, human rights groups, and Indigenous Peoples.

Luis Carlos Buob, a lawyer with the Nicaraguan Center for Justice and International Law, explained the project’s implications: “The canal concession includes more than 10 megaprojects, all of which are under the exclusive development rights of a single concessionary for more than 116 years, extending over a strip of territory 278 kilometers in length, essentially cutting the country in [half], signifying the largest land remover ever seen.” His colleague, Mónica López Baltodano at Fundación Popol Na, agreed: “The canal route will affect 7 protected areas, destroying approximately [1,930 kilometers] of diverse forests, affecting 13 municipalities, damaging 96 educational centers, 35 cemeteries, [and] 90 temples and churches. And it threatens damage to the great Lake Cocibolca, which is constructed in a most important fresh water reservoir in Central America, also considered the richest tropical lake in the Americas due to its ecological and environmental value.”

In additional to the canal itself, the interoceanic project will also mean the construction of two new ports, one on the Caribbean coast and the other on the Pacific coast; one oil pipeline that connects the Atlantic and Pacific seaboards; a railroad between the two ports; and an international airport. Two free trade zones will be established, one on the Pacific coast and the other on the Atlantic side.

The Nicaraguan government claims that this megaproject will bring development, jobs, and a better economic and social climate for the country. “Nicaragua is constructing a great interoceanic canal that is of international interest and importance, because it will reduce the distance, time, costs, and pollution in the transport of products and merchandise in the world. The project will allow the economy to grow, it will reduce poverty, hunger, and marginalization through the creation of thousands of jobs,” said Telémaco Talavera, advisor to the president of Nicaragua and canal spokesperson.

Despite the fact that the construction of the canal represents development to the government of Nicaragua, the country’s Indigenous Peoples see the project differently. They have rejected plans for these megaprojects, declaring that it violates their rights, mainly their right to Free, Prior and Informed Consent. To date, there have been 55 marches and 1 case currently being reviewed at the Inter-American Commission on Human Rights against Canal Law 840, which communities say clearly violates their rights and autonomy of their lands.

“The Rama Kriol Peoples approved a document with guidelines on the implementation of the consultation process, which was delivered to the Nicaraguan government. However, the response of the State has been to feign consultations that do not live up to standards for the matter,” explained Becky Magrey, member of the Rama Indigenous community whose territory stands directly in the way of the canal.

“Bill 840 was rejected by diverse social sectors, however, it passed in a hasty and anomalous legislative process of only 8 days and a discussion of only 3 hours. According to the analysis undertaken by specialists, within the elements of the concession misinformation and a general absence of consultation were highlighted,” said Azalea Solís, leader of of the Autonomous Movement of Women. Minister of Foreign Affairs for Indigenous and Afrodescendents in Nicaragua, Eloy Frank, said, “The canal will pass through eight communities who have been informed through meetings and who approved of the project. It is not the entire territory that will be affected, just the Rama Kriol territory.”

Speaking to the consultation of Indigenous Peoples on the construction of megaprojects, Álvaro Pop, the current president of the UN Permanent Forum on Indigenous Peoples Issues, declared, “To start with, they do not respect the right to consultation, and consequently, consent does not result from consultation. This is worrisome because administrative decisions on land concessions end up being action taken independent of and made prior to community consultations, so when a consultation is carried out, it is already too late. And that is where the large conflicts that we are witnessing now begin.”

Many community members and their leaders emphasize that they do not blanketly reject development projects; rather, they want development to happen on their own terms, ensuring well-being for themselves and their families. Often, Indigenous Peoples do reap benefits of large scale development that removes them from their lands. “No leader can be against development. What we can be against is the way in which we are not taken into account; what we want is to be taken into account,” explained Héctor Thomas, president of the Rama Kriol government.

Many have taken a pragmatic approach to these projects that appear inevitable. In some interpretations of the right to Free, Prior and Informed Consent, communities are not allowed the power of a veto of major development projects on their land, but they can choose to withhold consent until they are satisfied with the projects’ plans—however long that might take. In the words of Luis Castillo, member of the Bankukuk community, “We cannot stop the canal. What we can do is sit down, and if this is going to happen, we must negotiate. Because if we say no, this would be a lack of wisdom.”

If it decides to retract the contract for the construction of the canal, the government of Nicaragua is obliged to give a large compensation to Ying for pulling out of a signed contract. The reverse could also prove to be true: Ying would be liable to Nicaragua if he fails to follow through with the project. With Chinese markets falling dramatically there has been much speculation that Ying’s $10 billion USD fortune may have dwindled by as much as 80 percent, which may lead to the project’s demise due to a lack of funding.

Either way, since the announcement of 2013, the communities involved have grown stronger and more organized in opposition to the project, vowing to ensure that no project will move forward without the input and approval of the people.

Listen to the full radio documentary on the interoceanic canal in Spanish at: goo.gl/O8aEXe.

Photo: Demonstrations against the canal are taking place all over Nicaragua. Photo courtesy of Nicaragua sin heridas.