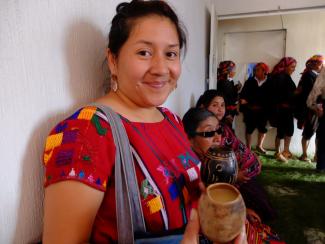 Cultural Survival is pleased to announce Avexnim Cojtí (Maya K’iche’) as the project manager for our Community Media Grants Project, a new initiative that will strengthen international Indigenous community radio stations’ broadcast infrastructure and systems. Cojtí has been a program associate for our Community Media Program and Indigenous Rights Radio since 2015. She is a sociologist with more than 10 years of experience in the fields of immigration, community development, and community radio. Cojtí has a degree in Indigenous Government Studies from the Institute of Indigenous Government, Vancouver, British Columbia, a sociology degree from Simon Fraser University; and a Masters degree in Public Administration from the University of Regina.

Cojtí grew up with her mom and four sisters in Chichicastenango, Guatemala. “My dad was working in Guatemala City and would come to visit on weekends,” she recalls. “During the early ’80s (civil war time) he would not come as often because he was protecting himself as he was an academic activist for Indigenous rights. My mom has been a very hard working woman. She was involved in community development, was an elementary teacher, and had a small store at the market days on Thursdays and Sundays. I didn’t like to get up early to set up the store and then go to school, but it was our duty to help my mom to get extra cash for us,” she says.

Cojtí credits her father with inspiring her work for Indigenous rights: “He used to take me to his meetings on Indigenous rights or cultural events and with Indigenous leaders in different parts of the country. He also encouraged us to use our Maya clothing and speak Maya K’iche’ as part of our identity.”

When Cojtí moved to Guatemala City to continue high school, she experienced racism from her classmates as the only Maya in her school. “The other Maya in school were the caretakers in charge of cleaning. Racism was so cruel that I didn’t want to be Indigenous, I didn’t want to use my own name or my clothing. I suffered as a teenager, but learned to become strong through this experience. I excelled in academics and this is how I gained the self-confidence and freedom to be just me.. I started to become interested in supporting the empowerment of my people and Indigenous Peoples around the world after this experience,” she says. When she was 18, Cojtí travelled to Vancouver to learn English and was connected to the Institute of Indigenous Government.

Cojtí sees the lack of knowledge of Indigenous history and globalization as some of the biggest issues facing Indigenous communities today. “A people that does not know its history cannot reflect on our present and realize that our lives matter, that there are situations like extreme poverty and violence that come from a root way back in history. I see many small organizations with different visions, but we have not been able to unify a national Indigenous movement. When we unify at a national level, we will be able to have major changes. Western culture is confusing new generations as they are eager to leave their identities for something so hollow and superficial that disconnects them from their families and communities.”