The Art of Youth Resistance and Inspiration: Nishiyuu Journey Across Snowy Canada 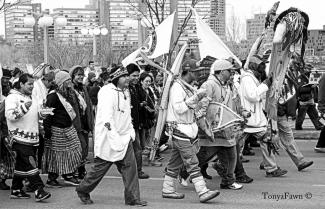 “Since time immemorial, we have called ourselves Nishiyuu (human beings), to distinguish ourselves from our relatives in the Natural Kingdom. The term has a complex and deep meaning, which includes the interconnectedness of all life, as well as the oneness of time within which all life begins and ends.” nishiyuujourney. ca

On January 16, 2013, six James Bay Cree youth from Whapmagoostui First Nation in Canada left their community on the shore of the Hudson Bay and started a trek to Parliament Hill in Ottawa to protest the violation of Aboriginal Treaty Rights and encourage the unity and acknowledgement of the Cree and other First Nations People. The “Original Seven,” Stanley George, Jr., 17; Travis George, 17; David Kawapit, 18; Johnny Abraham, 19; Raymond Kawapit, 20; Geordie Rupert, 21; and their guide, Isaac Kawapit, 47, hiked and snowshoed over 1,600 kilometers. On March 25, 68 days after they set off, they were greeted at their destination by a crowd of thousands, with their group having swelled to 270 walkers.

The Journey of Nishiyuu grew out of the Idle No More campaign, a grassroots movement launched in November 2012 in opposition to Canadian Bill C-45, the government’s omnibus budget bill that includes changes to land management on reservations. The idea for the walk was David Kawapit’s, who wanted to draw attention to some of the challenges faced by First Nations people such as marginalization, poverty, lack of clean drinking water, and inadequate housing. Kawapit sought to share a simple message of unity and pride: one that was maintained and expressed by the Cree, Inuit, Algonquin, Mohawk, and other youth who joined along the way. As stated on the group’s website, “This quest-journey will establish and unite our historical allies and restore our traditional trade routes with the Algonquin, Mohawk and other First Nations. The time for Unity is now.” It was important for Kawapit to share this message with younger generations of First Nations groups in particular. Upon arriving in Ottawa, a weary Kawapit announced, “The youth have a voice. It’s time for them to be shown the way to lead. Let them lead the way.”

Jordan Masty, 19, joined the group in its earliest stages and was a consistent carrier of a symbol of the journey: the unity stick. The journey followed the traditional trade routes of the Algonquin, Mohawk, and Cree, serving to promote solidarity within and among the tribes. In walking the same paths that were walked by their ancestors, the youth sought to understand the conditions faced by previous First Nations members. According to Chief Stanley Jason George, this was a vital movement at a vital time: “The Seventh Generation took action and clearly indicated that they will no longer abide by the status quo. By taking action, by taking a stand, and walking the talk...the corporations and government now see what we are capable of and that our cultural-ancestral values are very much alive!”

In undertaking the voyage, the group faced burdens both physical and mental. At several stops along the way the walkers were met by family, friends, and welcoming cheers, which helped ease the loneliness. By the time they made it to southern Ottawa the group was nearly 100-large and walking next to highways with police escorts, with passersby honking in encouragement. The ambitious journey was completed in part because of the strength of the bonds within the original group, and with those who joined along the way. Reflecting on his completion of the journey, Kawapit said, “It feels really good, but at the same time I’m really sad that it’s ending. A lot of us shared a lot of good times here, sad times, but we all stuck together.”

As the number of walkers grew, so did public support; the Facebook group dedicated to the Journey of Nishiyuu has over 36,000 members. The public support did not translate to media attention, however, as there were only scattered online news accounts and exposure outside of social media outlets. Despite the general disregard by the mainstream media, or perhaps in spite of it, the group pushed on through treacherous terrain and temperatures dropping as low as –50°C in order to portray the ongoing strength and pride of First Nations groups. With about one week to go, 22 of the walkers were treated for foot injuries. Three of the ailing walkers were ultimately sent to a hospital in Maniwaki, Quebec for more treatment.

In the face of this adversity the walk continued, and upon finally arriving at the steps of Parliament Hill in Montreal, the Original Seven were greeted by over 3,000 people, including Green Party Leader Elizabeth May and Canada’s Aboriginal Affairs Minister Bernard Valcourt. Valcourt has reportedly accepted an invitation to travel to northern Quebec this summer to visit with the group and learn more about their concerns. At the reception, May spoke of the negligence of Prime Minister Stephen Harper, who had chosen to be in Toronto to greet an arriving pair of pandas on loan to Canada from China. “It says a lot that Stephen Harper isn’t here, that he’s greeting the pandas. It says a lot that we need to move heaven and earth to meet First Nations on a nation-tonation basis with respect,” she said.

Each First Nations member who walked reinforced the need for Indigenous people to be active in their own advocacy, much like their predecessors in the Idle No More movement. It is of special note that the majority of the walkers were First Nations youth—a sign that this message is being carried between generations. The Nishiyuu Journey was as much a walk to reconnect with ancestors as it was to create the path for youth of the next era. Again from the Nishiyuu website: “Our Nishiyuu Walkers will have fulfilled the prophecy of how the warriors would bring the Summer Spirit back home again.”

This legend has relevance to the Journey of Nishiyuu. It is said that this legend is also about the end of the Ice Age. Once there was a young boy who couldn’t stop crying after his grandfather had left for a new journey in the Spirit World. It was winter. The Elders advised that he be asked what would make him stop crying. “If I could only hunt summer birds with my bow and arrow, I would stop crying then,” he said. Elders and tribal leaders gathered in council. Through the ceremonies they were told that the only way to make the young boy stop crying was to bring back from the south the Summer Spirit. The people were warned that this wouldn’t be easy because it was kept in a bundle and guarded by a fierce tribe in the south. For ages they had kept the Summer Spirit only for themselves so that winter would never come. They would destroy anyone who attempted to take it away from them. They were feared far and wide. After many councils of tribal leaders and Elders, it was decided that the best runners among the tribes’ warriors would be sent to the far south to fetch the Summer Spirit. There would be many challenges on the way, before they reached the village in which the bundle was kept. Source: Matthew Mukash, nishiyuujourney.ca

—Terrence Hall is an intern at Cultural Survival.

To learn more about the inspiring journey of Nishiyuu youth, visit: nishiyuujourney.ca