Arctic Village, Alaska On the Frontlines of Climate Change 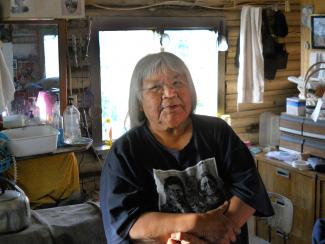 Arctic Village is one of the most remote Native villages in Alaska; far away from the noise and turmoil of mainstream society, the only large chaos it consistently registers is climate change.
This past summer, Arctic Village saw rapidly shifting weather and its strongest storms.

Gideon James is a Gwich’in Elder in Arctic Village who is seeing shifts in fish migration. “I really think the fish are moving South toward the Yukon. Global warming is here. Scientifically, we can’t solve it, but as human beings, we can slow it down by driving less. [Cars cause] carbon dioxide (CO2).” Gideon says a solution to the creation of CO2 is to plant more trees. Trees purify and filter the air. They also “store” carbon dioxide as wood so that CO2 cannot become an available greenhouse gas. Gideon also mentions the heat waves that have characterized recent summers in the United States. The increased heat has created conditions perfect for uncontrollable wildfires. “There is bad weather and every year it’s getting worse and worse. Thirty years ago the permafrost was solid underground, so the land was flat. Now there’s dents everywhere.” Asked what people can do about the increasing climate change, he says we have to first target greed. “If we don’t identify greed, we will destroy the earth. The greedy take and take. Get greed under control!”

Sarah James is Gideon’s sister and another Elder in Arctic Village. She is said to be the most famous Gwich’in advocate in the world. She speaks of global warming internationally. “All summer, we weren’t getting summer weather. This is Juneau weather,” she says pointing to the rain clouds outside. Sarah says the constant rain makes the waters muddy upriver. “Too much erosion and permafrost melting is hard on the fish and lots of animals that find food on creeks, like ducks and birds.” Sarah’s solution is simple: “[The] solution starts in our living room. As soon as you get up to the time you go to sleep, you have to change the way you think and do things.” She says we have to accept a new way of life and not think of it as a chore. “It took 500 years to get ourselves into this mess, and it’s going to take another 500 years to undue it.” She says the Creator already figured everything out and that we need to pay attention! “Every animal in nature has a job and works like we do. If one is missing, it all shuts down.” She then re-emphasizes her solution. “It starts in your own house. I hardly throw anything away, I re-use, reduce, recycle, refuse,
and use less,” she says, expounding on her lifestyle as a model.

Another Gwich’in Elder, Allan Tritt, says the climate has become too chaotic for even an Elder like him. “You go out, it’s sunny, you go out later, it’s raining, and you go out again, it’s windy. We can’t predict anything. You and I could wake up tomorrow and the land will be covered in snow and they’ll be caribou sitting in the field.” Allan says laughing. “I can’t say anything, because tomorrow I might be wrong.” Allan says he heard three Native Elders at the Alaska Federation of Natives this year say: “From this day on, we don’t know what’s going to happen.” Allan then went into ancient prophecies of Gwich’in Elders, when they foretold the time of change. When there would be “airplanes all over, lots of food, lots of light, and white men all over.” He then comments on how “too easy-going” it is today.

Trimble Gilbert is the Traditional Chief of Arctic Village and the second Traditional Chief of the Athabascan People. I interview him in his two-story home overlooking most of the village. “More vegetation is growing because of lots of rain. The brush is hard for caribou.” He mentions that animals are disappearing: ducks, snipes, and pike. “Couple of years ago, we saw a polar bear; then another year we had problems with wolves killing our dogs. Things are changing so much.”

This summer, Arctic Village’s East Fork River turned completely red for a few hours. It stunned the village and even made the Fairbanks Daily News-Miner. Trimble recounted, “The river turned red from the Red Rock. This has never happened before. The basin upriver was shaken by rain, hail, and thunder.” When I mention Allan Tritt’s statement about unpredictability, Trimble agrees. “Yeah, like Texas ran out of water and look what happened in Japan. We don’t know what’s going to happen.” He also agrees with Gideon about greed. “Rich people go anywhere they want and always roll over us Native People with money.” Trimble’s solution is that human beings need to consume less. “A plane from Fairbanks burns 50 gallons an hour, so that’s a 100 gallons roundtrip every day. We [Arctic Village Gwich’in] don’t burn that much. The city is different.” He remarks that urban America should learn to not waste so much energy and learn to conserve. His other idea for countering climate change is allowing Native Americans to own and manage land, as they did in ancient times.

After hearing the amazingly wise and intelligent words of the Gwich’in Elders, I turned to the Gwich’in young voices. Kristen John is a 26-year-old single mother. “The bad weather has affected our hunting. We won’t go out as much as we used to.” She says the constant rain makes her lazy and moody. “It’s obvious the land is changing because of climate change. The land is not going to be the same.” She continues, “I don’t have to go out into the woods, I can just ‘feel’ it. The rain hasn’t stopped.” Kristen says she sees the weather only getting worse. She also says she is raising her son to be as independent as possible. “I want him to live off the land and do things on his own.”

Kate Hollandsworth is an 18-year-old Gwich’in high school senior in Arctic Village. She was disappointed about Arctic’s rainiest summer, “It wasn’t a summer break for us [students], because we couldn’t go outside. Now, school is around the corner.” Kate and her friends were terrified by the unusually strong thunderstorms. “When it was happening, my cousin called crying: ‘Oh my God! What do I do?’ I told her, ‘Just get down!’” Kate laughs. Kate also says she may not even enjoy the state fair, because of the rain. “Rain is getting everyone sick. I drove down when it was sunny, the next minute it was raining, and the next day I had a cold because I didn’t bring rain gear, because it was sunny.” Asked what her message was for the world and the United States, she says: “No one is going green, start recycling!”

Clifford David is a 17-year-old Gwich’in high school junior in Arctic Village. The weather scared him so much he didn’t go outside most of the summer, and he says, “The bad weather in Arctic was rather strange, everyone was talking about it. Everything has changed. I just hope it doesn’t continue on this downward spiral.” Both the Gwich’in Elders and young people have the same message, the world needs to move towards sustainability and environmentally sound lifestyles before the weather gets worse. As Sarah James says, “The battle starts in our living room, by changing our lifestyles.”

— Matt Gilbert (Gwich’in) grew up in Arctic Village, Alaska and is a freelance journalist. He can be reached at mattgak35@gmail.com.