The Archipelago of Hope: Wisdom and Resilience from the Edge of Climate Change 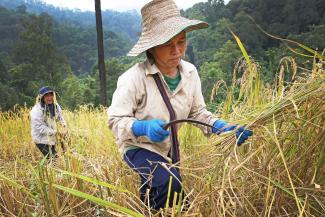 The following is an excerpt from two chapters of the newly published The Archipelago of Hope (2017) by Gleb Raygorodetsky, an enlightening global journey revealing how the inextricable links between Indigenous cultures and their territories are the foundation for climate change resilience around the world. The Indigenous traditional territories are islands of biocultural diversity in the ever-rising sea of development and urbanization. As we enter the Anthropocene epoch, they are an “archipelago of hope,” for here lies humankind’s best chance to remember our roots and how to take care of the Earth. These communities are implementing creative solutions to meet these modern challenges—solutions that are relevant to the rest of us.

A growing number of experts increasingly agree that swiddening is arguably one of the most sustainable forms of agriculture known to man. To learn more about this ancient practice, I traveled to northern Thailand, where the Indigenous Karen and their research partners have demonstrated that shifting cultivation helps them adapt to climate change and mitigate its impacts—something we all benefit from.

“We’ve harvested three thousand jars [fifteen hundred pounds] of wild honey this year,” [Chaiprasert Phokha] declares, not without pride, and his face spreads into a satisfied grin. “All of it came from the wild bees living in the rain forest around our village,” Phokha explains with the help of Dr. Prasert Trakansuphakon, my guide and translator, who brought me to Hin Lad Nai—an Indigenous community of Pgakenyaw Karen in northern Thailand. [Here] the Karen people [are] keeping their land-use traditions alive, despite the government’s attempts to ban them because their traditional practices supposedly made climate change worse. The Karen have been collaborating with researchers, like Trakansuphakon, to demonstrate just the opposite, that their traditions are good for the biodiversity, local economy, food security, and a viable climate change mitigation strategy.

A Karen himself, Trakansuphakon has been working with the Hin Lad Nai community, helping them document their traditional ecological knowledge, while bringing undergraduate students and researchers from Chiang Mai University to study the Karen land-use practices.

According to Trakansuphakon, climate in Thailand is expected to become warmer. The summers will be longer, and winters shorter. During the wet season, rain will not fall as often, but it will be more of a torrent than a shower when it does occur. The total amount of rain will likely stay the same every year, but it will not be distributed throughout the seasons as predictably as in the past. An increase in heavy storms, the ensuing floods, and mudslides will lead to more erosion, especially in deforested areas. After such downpours and floods, the oversaturated soil fails to absorb all the standing water, creating a fertile breeding ground for mosquitoes, leading to increases in waterborne diseases, like malaria and dengue fever. At the same time, periods of drought will be longer and more intense, devastating Thailand’s rice paddy agriculture, the third largest global rice producer.

Pressured by the government to abandon their subsistence agricultural traditions in favor of intensive farming of major cash crops, like paddy rice and corn, many rural farmers in the region can barely earn enough to feed themselves while repaying the loans they must take to buy seeds, pesticides, and fertilizers for growing these cash crops. When the farmers switch to permanent agriculture focused on a few highyield cash crops, they abandon the diversity of traditional crops that have sustained them in the past and proved resilient to pendulum swings in the weather. When the crops fail because of extreme-weather events—such as floods, droughts, hail, or tornadoes—farmers have few options available to them. Unable to grow their own food, and having to pay off their loans, many farmers quit farming and move to the city to seek menial employment to support themselves and their families.

The villagers have been caring for and harvesting [Assam] tea for generations, despite several attempts by the government to introduce the more profitable, but also fertilizerintensive, oolong tea. The Assam tea tree flowers are highly valued and, just like tea leaves, are dried and sold.

But even more valuable is their role in attracting wild bees.

Three kinds of wild bees live in Hin Lad Nai’s forest, explains Phokha. The giant kenae bees plaster their honeycombs over thick branches high up in the canopy. The medium-size kwae hide theirs in the underground cavities or old trees. And the small kenae pho, the stingless bees, build honeycombs inside bamboo trunks. Traditionally, the Karen would only collect honey from the colonies of the giant kenae bees. The honey hunters would climb fifty to sixty feet high up a tree to harvest the sweet forest nectar. But several years ago, one local Karen family decided to try their hand at beekeeping with local wild bees. Along a forest trail, they set up beehives made of short hollowed-out trunks of local trees. To entice the wild kwae bees to settle in the hives, they smeared the insides of the trunks with the beeswax from the wild kwae honeycombs. The experiment was a success, and today most of the Hin Lad Nai families put out dozens of beehives along forest trails, harvesting hundreds of pounds of wild honey every year. They keep some for themselves, but sell most of it at the market, putting 10 percent of their earnings into a village fund that supports diverse communal activities—from purchasing a truck to deliver harvested tea to a nearby processing plant to paying for the costs of clearing a firebreak around the Hin Lad Nai forest.

The landscape where Phokha’s wild honey comes from has been managed by the Karen for generations following time-tested traditions of shifting cultivation—an ancient set of agricultural practices that involves clearing forest patches to plant crops for one or two seasons, and letting the surrounding woodland return, before repeating the cycle. Today, the wooded hills of Hin Lad Nai look just as verdant as the slopes of the Khun Chae National Park we drove through on our way here—diverse and thick vegetation, trees of different sizes and ages under a multistory canopy. The village of Hin Lad Nai is recognized by the government of Thailand as a model of a low-carbon, environmentally friendly lifestyle, and yet most Thai and global environmental experts and government officials continue to regard shifting cultivation as anathema to biodiversity conservation and healthy ecosystems.

Graphic images of hewn-down trees and scorched earth shock us easily. Our visceral, though largely uninformed, reaction is to think that any land-use traditions leading to such apparent devastation are backward and primitive practices that must be abandoned. Slash-and-burn agriculture is the commonly used derogatory misnomer that epitomizes the supposedly heinous nature of swidden agriculture.

Thai authorities consider the Karen traditions of shifting cultivation to be the most primitive and unsustainable type of land use. It seems improbable that a forest so “misused” could provide a suitable habitat for any creature, let alone such environmentally sensitive pollinators as bees. The honey in my hand, however, tells me a different story of shifting cultivation, and the Karen, stewards of this ageless tradition. It is a tale of a forest with rich soils and abundant wildlife, including that key indicator of a healthy ecosystem—wild bees. A myriad of things must coalesce to fill Phokha’s glass jars with the rich, wild honey. Sunlight, water, and soil must provide energy and nutrients for the plants to grow; wild bees—an important bioindicator of environmental health—have to pollinate the flowers; and wildlife and birds need to eat and distribute the fruit and seeds, enriching the soil and structuring the forest.

For the Hin Lad Nai rain forest to be healthy, this intricate dance must take place year after year, ad infinitum, despite the Karen tradition of shifting cultivation. Or could it be because of it?

“For the wild bees to do well, the forest must have lots of shade from big and small trees of different ages. It all depends on the year, of course. Sometimes there’s more honey, and sometimes there’s less. But we harvest and sell it every year now,” explains Phokha. “Our neighbors in the next valley, though,” Phokha continues, motioning toward the window, “decided to sign up for a government rural development program and converted most of their forest to permanent fields to grow corn for sale. In the past, they’d never spray any pesticides or fertilizers on their fields, just like us. But now, their soil is so poor without the swiddening that they have to do it. There’s no wild bees left there.”

Trakansuphakon expands on Phokha’s story. “Intensive agriculture permanently converts rain forest into vast cornfields or oil palm plantations, creating dead zones. Hin Lad Nai forest, on the other hand, has remained remarkably healthy, despite centuries of shifting cultivation. And, at a time when numbers of honeybees are declining worldwide, local wild bees are thriving.” It seems that the conventional disparaging view of shifting cultivation, promoted by government bureaucrats and development agencies, doesn’t reflect the true nature of this tradition.

ALL PHOTOS BY GLEB RAYGORODETSKY.