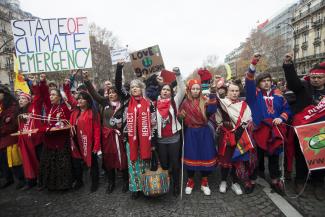 On December 12, 2015, in Paris, after two decades of climate talks within the United Nations Framework Convention on Climate Change (UNFCCC), world leaders from 195 countries and the European Union came to a consensus in Paris on a legally binding agreement on climate change, with the aim of keeping global warming below 2°C and reducing carbon emissions across the globe. The 2-week long 21st Session of the Conference of Parties (COP 21) process also brought together some of the world’s largest corporations, environmental and human rights organizations, and grassroots activists to hash out international energy goals, standards, and implementation. Over 250 Indigenous delegates were present and advocated for the inclusion of Indigenous Peoples’ rights in the Paris Agreement.

Earlier drafts of the agreement included the protection of Indigenous rights in Article 2.2, which would have formed part of the text that is legally binding. But in the second week, this reference was annexed under direction from the European Union, Norway, and the United States. Despite active lobbying by the Indigenous Peoples Forum on Climate Change (the formal body of Indigenous Peoples recognized as observers to this process), the EU and US have been poised as two key players in the fight against Climate Change. But their lack of support for Indigenous rights will leave Article 2.2, and consequently, Indigenous Peoples, without binding legal or political clout. The references to the protection of Indigenous Peoples’ rights were finally included in the preamble to the text, which crafts the framework for interpreting and implementing the operative section.

COP 21 brought together over 250 Indigenous leaders from all corners of the planet, yet most of them were excluded from official negotiations. Chief Bill Erasmus, 28-year elected leader of the Dene Nation, voiced his frustration: “We have our own land, our own language, and our organizations and laws. We meet the criteria of a nation. We are a nation. Why are we not in that room?” Considering the challenges that climate change presents to Indigenous Peoples and the land and water-based responses required, Chief Erasmus’ argument strikes a chord. More than 370 million people worldwide identify as Indigenous, yet their leaders are routinely excluded from decisions that affect them.

The Indigenous Peoples Forum on Climate Change could not formally take part in the actual COP negotiations. However, they worked nonstop to influence the process, crafting and delivering position papers and making sure that governments gathered in Paris were clear on their demands. They organized well in advance of COP 21, held a strategy session directly before as well as daily caucuses, and ad hoc strategy sessions throughout. They continually lobbied those governments opposing their positions and encouraged those supporting them.

Directly next to the official COP 21, the “Climate Generations Space” was set up for the general public to access. Within this arena, the Indigenous Peoples Forum organized the Indigenous Peoples’ Pavilion. Activities included hosting political discussions, cultural presentations, and press conferences. It was also used as a meeting space for those not able to access the official meeting and as a platform for educating civil society.

Many Indigenous Peoples decided to engage outside of formal COP 21 settings, taking part in the plethora of events and actions being held in Paris. Many peaceful actions were designed by the Indigenous Environmental Network, a grassroots consortium of Indigenous leaders and communities working for environmental justice. Their motto, “Defend, Protect, Renew,” printed on red bandanas, banners, and placards, made the Indigenous presence at COP21 highly visible.

“People discuss ‘red lines.’ We are the red line. We are the keepers of the land, protectors of animals, the seas, the air. We are the solution.” — Tom Goldtooth

To mark the end of COP 21, a series of civil society actions were planned. The Indigenous Environmental Network started the day with a sunrise ceremony for the global Indigenous community gathered there. They formed a circle directly in front of the religious center of Paris, the Notre Dame Cathedral —its placement both a strong political statement and visual testament to the endurance of Indigenous Peoples. Unbeknownst to the group, this location was also next to a military space. Despite explanations, the nervous guards quickly decided to bring this peaceful ceremony to a close. Undeterred, the group formed a human chain leading themselves to Pont des Arts, known across the world as the “Love Lock Bridge.” Organizing their own take on this tradition, the peaceful gatherers tied red strings to symbolically mark the Indigenous red line. They then unfurled a red banner, nearly stretching across the entire length of the bridge, to make their red line even more visible.

Reactions to the Paris Agreement

Although COP 21 was set to finish Friday, December 11, the closing plenary went late into the night, so the Paris Agreement was formally adopted on Saturday, December 12. A testament to their ongoing dedication, those Forum members still in Paris remained until the end of this late night session, delivering their final statement to an almost empty room. Frank Ettawageshik, representative of the National Congress of American Indians, delivered the Forum’s speech, remarking that “Indigenous Peoples are those who least contribute to climate change, having safeguarded our traditional lands, territories, and resources for millenia. Because our lives are inextricably and intimately related to the natural world, every adverse effect on that world acutely affects our lives.” Ettawageshik highlighted the fact that the rights of Indigenous Peoples must be recognized, protected, and respected within a broad human rights framework and expressed their disappointment that this assurance was not included in the operative section of this agreement.

UNFCCC sets an overall framework for intergovernmental efforts to tackle the challenge posed by climate change. Its objectives are to stabilize greenhouse gas concentrations in the atmosphere at a level that would prevent dangerous anthropogenic interference with the climate system within a timeframe sufficient to allow ecosystems to adapt naturally to climate change; to ensure that food production is not threatened; and to enable economic development to proceed in a sustainable manner.

IIFPCC is the Indigenous Peoples’ coordinating body recognized by the UNFCCC with observer status. It is an open platform for those Indigenous participants wishing to collaboratively engage in the negotiations and activities related to the UNFCCC processes.

Indigenous Peoples’ delegation at the Post-COP 21 Demonstration on the Champs Elysees in Paris.

ALL PHOTOS BY ANDRÉ LARSSON.