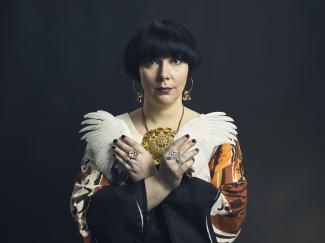 I am Jussen Ántte Sálmmo Ánná Máret, Anna NäkkäläjärviLänsman. My artist name is Ánnámáret. I am originally from Inari, a central village of Sápmi in Finland, and my family’s roots go all the way back to Enontekiö. Eight years ago I got married, and now I am living with my family in a small northern village called Utsjoki. The landscape is totally different from Inari: Utsjoki is far more north than Inari and above the coniferous tree line. So, the birches I used to see through the window from my room in my childhood home aren’t there anymore.

It is not easy to make a living here. You have to be creative, and especially in the traditional livelihoods you have to remember to respect nature and its spirit. I think a lot of people think that the old religion is not living anymore amongst our people. Could it be that it actually still is? As far as I have considered it, we are spiritual people. It is natural; we don’t have to explain it to each other. The most important thing is nature, to respect it and to use only what you need, not more. I think we still live our lives holding strong to these principles, though modernization has changed our lives and society a great deal. However, I am not ready to think that we have lost our spirituality.

I work as a musician. I sing, research, teach, produce, and consult. I have my own band, Ánnámáret Ensemble, and we have released two albums. I compose the music and write the lyrics in Sámi to the music I perform. I was originally trained as a classical clarinetist, and at some point I started to think about the life this path was offering for me. It was hard work and really inspiring, but I felt that my place was somewhere else. Somehow life carried me forward and I started to reach for different kinds of dreams.

One dream was definitely to become a singer and know Sámi vocal heritage better, so I started to compose my own music to get there. My music is inspired by the Sámi way of living and the nature around us. We fight great battles against colonialism, but there is also a great battle inside us to beat the colonialism within. Sometimes I think I write about things that are too ordinary and not sparkling at all, but in the end, those are the things that express life here realistically and have the most meaning for Sámi people. I think my texts are written to Sámi people all over Sápmi, and I hope people understand the hidden meanings in the lyrics.

do music with my cousin when we were children, and that is a starting point that you can still hear. It is a combination of traditional Sámi vocal music (yoik) and instrumentation. I listened to Nordic folk music a lot when I was a teenager studying music, and I think that it still influences me a great deal. I like to work with folk musicians. My compositions feature a strong Sámi vibe, but somehow it is put through an Ánnámáret filter that makes it both original and recognizable. I have been singing in the Sámi language since I was a child. I never thought about writing lyrics in Finnish, even though it is actually my mother’s language. Singing in Sámi and listening to Sámi music has been an important link to Sámi culture for me, especially when living outside the Sámi area. Singing in Sámi was a natural decision, and it is a rewarding feeling to create something new in the Sámi language.

I am really happy that at the moment I have the opportunity to work with the vocal traditions of my people. I am researching some archive yoik recordings that I found recently from archives in Finland. Yoik is a traditional form of song of Sámi people; each yoik is meant to reflect or evoke a person, animal, or place. This has opened a new world for me. The world was really close and familiar for me also before this, but now I feel a stronger connection to my heritage. It is like getting a missing piece of me back, and hopefully at some point I can forward it to people that this affects as well.

can forward it to people that this affects as well. Listening to yoiks from the archives opens a window to the world people lived in a long time ago. You can hear the nature and the reindeer from the lyrics. It is mindblowing how the yoiker, only using a few lexical words in the yoik lyrics, describes the whole world and life. I see the tundra inside my head, I feel the cold in my body, I hear the wind blowing when listening to the old yoiks. One of my friends once described how listening to a talented yoiker can be a spiritual and healing experience.

I have been working with Sámi music education for years. Currently we are establishing a special Sámi Music Academy in Utsjoki. The idea of the school is to educate Sámis in their own vocal music cultures, but also in general music subjects needed for working in the field of music. It has been great to work with students eager to learn about their music cultures and also with Sámi music professionals willing to share their knowledge about the vocal traditions. I have already learned so much during the process, and I will be learning more together with the students and teachers in the future.

When we are teaching the Sámi vocal music styles in a systematic form, we have to be careful. There are a lot of things you have to consider when bringing an oral tradition to a general education. For example, not all of the traditional materials we know and find from the archives are suitable in teaching or performances. It is important to have constant dialogue with the Sámi society and the elders that have the traditional knowledge to find the way that this kind of education can work, so we can simultaneously maintain and revitalize the traditions.

The greatest challenge for Sámi women and Sámis in general as a minority culture is how to be equal with the majority. We have so many educated and quick-witted professionals in many fields of modern society, but unfortunately if you make your ethnic background visible, often you are not taken seriously or you are not considered professionally equal. The Sámi community has been discussing lately about the freedom of speech as well; we have new theories about the fact that it is limited nowadays, for example in mainstream and social media.

When I think about Sámi culture in modern society, I have to celebrate how amazing it is that the people didn’t give up their traditions or culture even if the pressure from the outsiders has been harsh at times. Sámi women have been equal with the men in society when considering, for example, owning reindeer or working. These days when the traditional way of living rarely exists, it seems that it is predominantly Sámi women who carry the responsibility of passing the traditions on to the next generations.