In Alliance as Native Youth Leaders, as Family 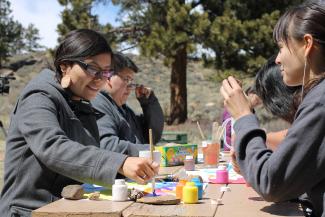 “In the beginning there were only the skies, the earth, animals, and plants. Before humans were to come, the creator called them all together and told them: ‘The humans are coming. They are pitiful. They do not have food or clothes. Will you take care of them?’ The salmon was the first to speak up. He said, ‘I [will] feed them with my flesh.’ The water spirit spoke next and agreed to take care of the salmon and also nourish the hearts and bodies of humans. The deer then promised to give its life for feeding man. It is with deep respect that my community partakes in the meat of salmon. I thank all the beings that gave us today’s dinner.” --Johnny Buck (Yakama/Wanapum)

It was dinnertime at the National Visioning Retreat of the Native Youth Leadership Alliance (NYLA), in Estes Park, Colorado, and co-founder Johnny Buck of the Wanapum tribe was leading the prayer before the meal. Young Fellows who are leaders from over 20 tribes and their mentors stood in a circle around him, reverent and attentive to the sacred story Johnny was sharing. A sumptuous meal of salmon and rice with other traditional foods was served, and the tables were abuzz with conversation, ideas, and reminiscences of the day. Each day at the four-day annual retreat was an eventful and transformative one for this new group of young leaders as their first introduction to the people and ideas that make up the Alliance.

Charting their unique life stories using the metaphor of the river of life; sharing artifacts and memories that define their values; discussing decolonization, generational trauma; healing; and visioning for the future, the Fellows explored their selves: the self in place; the self in polity; the self in community. It was a perfect start to realizing NYLA’s vision of cultivating self-aware,  community oriented, and culturally rooted leaders.

Five years ago, in 2008, Kevin Killer from the Oglala Lakota Nation in South Dakota and of Kiowa descent (now a State Representative for District 27 in the South Dakota Legislature) was selected as a “Young People For” (YP4) Fellow. He was surprised to learn that he was the first Native American youth to represent Tribal colleges in a leadership network that represented over 21 states. The void that he saw, occurring at a time when the youth population is becoming the majority in Native American communities, compelled him to create an extension of the YP4 network to Tribal colleges. In 2009, Sophia Kizilbash, who co-directs NYLA with Killer, joined the network, bringing extensive cross-cultural experience from her work with communities across the United States, United Kingdom, Malaysia, Jamaica, and the Philippines. Recognizing the need for the network to grow beyond the agency of YP4, the core group expanded and co-founded NYLA with the clear objective of providing culturally relevant leadership support to develop vibrant leaders within Native American communities. NYLA invests in Native youth from tribal colleges and rural areas, inspiring them to develop plans of action rooted in their communities and nurturing them to fruition. Every two years the Alliance invites a new group of young leaders and fosters them through a series of national and local retreats, capacity building programs, networking opportunities, peer support, and intergenerational mentoring. It also provides a stipend to assist the

Fellows in seeding community-building initiatives, skill-building trainings, or networking opportunities. Prescriptions for leadership today are disproportionately influenced by the values of the dominant economic and political systems, with an excessive emphasis on centralization and management, competition, and rationalism. The Alliance is a valuable divergence from this norm with its emphasis on a decentralized and relational leadership style that is rooted in reciprocity, and in the assets and values of its communities.

Its very structure is one of collective leadership with almost no hierarchy and centralization; its leadership program is geared towards building supportive and personal networks between the fellows and their mentors, and using those networks to guide the youth to create change in their communities in a timeframe sustainable for the long term. For NYLA’s Fellows, who come from cultures where the concept of leadership is informed by interdependence, assimilation to the organization’s principles is easy. Past Fellows have gone on to become archeologists, community organizers, filmmakers, illustrators, elected officials, educators and entrepreneurs. They are building the capacity of their communities through initiatives that strengthen culture and language, promote healing and restorative justice, increase economic and political participation, and ensure food sovereignty.

24-year old Burdette Birding-ground, who co-created a portable kiln to utilize wood waste that also converts it into bio-char (a soil fertilizer), and 27-year-old Michelle Sherman, who started the “Celebrate Life” initiative to reach out to Two Spirit/LGBTQ youth like herself in her Dine’ Navajo community in New Mexico, exemplify the Alliance’s vision for leaders. “In NYLA, the fellows are given a whole palette. They choose what they are ready for, where they want to focus. By supporting their growth and well-being, we support their community’s well being,” says Kizilbash.
Going beyond deadlines, expected outcome charts, and Fellow achievement measures, there is real space for innovation and learning within the Alliance’s folds. Montana Fellow Amy Stiffarm (Whiteclay/Chippewa Cree/Blackfeet), who is currently a member of NYLA’s organizational leadership team, notes, “In today’s society, to stop and think is not OK. It is not OK to take time for reflection and self-development. But in NYLA you are given the space and support to incubate, to create, and understand yourself as a critical part of being a leader. NYLA gives me the space to find the answers from within my own communities, at my own pace.” Voicing the same appreciation, former Fellow Angel Mills, a film student at the Institute of American Indian Arts says, “NYLA and its relationship with its Fellows are not tainted by deadlines. Deadlines come in when it’s a short-term relation that you get yourself into. Our association with NYLA is long-term. Lifelong. It doesn’t have the deadlines. It’s a network, a family, for life.”

This lifelong, empowering circle of support and friendship is creating crucial changes in the Native American communities, but this success has come with its own challenges. Ironically, the very factor that renders the Alliance successful— its long-term, flexible, individualized approach—also makes fundraising difficult. Aside from a few funding sources that are willing to go beyond the conventional definition of leadership development, most formal sources see it as an entity too organic to fit neatly into their funding criteria. But for the people who are NYLA, who are passionate about their vision of creating long-term, meaningful change in Native American communities through their very own leaders, these obstacles are mere inconveniences. These young leaders are out among the people, creating and relating powerful stories of sustainable change within their communities, proving again and again their success.

—Febna Caven is an independent researcher and writer on communities in contested environments.