ON AIR: Spreading the Word About the Right to Free, Prior and Informed Consent 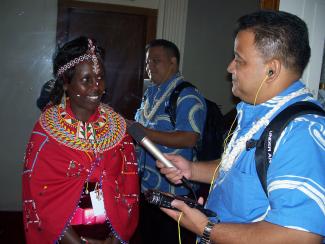 Native peoples representing Indigenous nations worldwide adorned with a plethora of colors, textures, and designs to proudly indicate their various cultures set the scene for the twelfth session of the United Nations Permanent Forum on Indigenous Issues. From May 20–31, the halls of the UN headquarters in New York were abuzz with the steady flow of indiscernible-yet-familiar tones of the native tongues of the participants. The Permanent Forum is an advisory body to the Economic and Social Council with a mandate to address Indigenous issues related to economic and social development, culture, environment, education, health, and human rights. Many indeed have gathered and united to work and fight for the betterment of all Indigenous Peoples. By working
towards a common goal, we become a large body of Indigenous power, rather than fragmented groups of tribes working in isolation.

The majority of the Forum topics centered around the UNDRIP, the acronym and catchphrase for the United Nations Declaration on the Rights of Indigenous Peoples, which was adopted by the General Assembly on September 13, 2007. Of particular importance is the right to Free, Prior and Informed Consent (FPIC) as indicated in Articles 10, 11, 19, and 28. The principles of FPIC seek to ensure that a given community has the right to grant or withhold consent for proposed projects that might affect their lands, resources, and territories.

Capturing interviews and feedback on the right to Free, Prior and Informed Consent was the focus of the international and multilingual team of radio producers, writers, and Indigenous advocates sent by Cultural Survival to cover the event. The main goal was to gather content for an innovative new radio series to spread the word about the right of Indigenous Peoples to FPIC in order to inform Indigenous listeners about their rights under international law. As Mark Camp, Cultural Survival’s deputy executive director, explains, “It is important to spread the word among Indigenous communities about the international instruments available for mobilization in struggles for their sovereignty and self-determination. Cultural Survival’s radio programs concentrate on the principles of FPIC in order to make that knowledge free and accessible to Indigenous communities worldwide.” Camp acknowledges that “while questions remain concerning the determinations made as to who might be affected by a particular development project, what it means to gain recognition as an Indigenous community, and to what member(s) within a community will serve as interlocutors to state and corporate interests, it is important to begin the dissemination of information and grant access to international rights for people calling on governments to respect, protect, and fulfill their obligations under international law.”

The Declaration is a powerful document. But as Catherine Davis, a Forum participant from Aotearoa, points out, “[The Declaration] is of great value to us, but you have to use it or lose it. It’s great on paper, but if you are not going to activate any of the articles in the Declaration, then it is really not worth the paper it is written on.” The majority of our interviews confirmed our earlier research, which suggested that a large number—possibly a majority—of Indigenous people are as yet unaware of the existence of the rights afforded them under international law, along with the implications that these rights hold for them and the future wellbeing of their peoples. It is with this in mind that Cultural Survival is producing and distributing this series of radio programs on the UN Declaration on the Rights of Indigenous Peoples to inform Indigenous listeners about their rights. Working with communities to develop their own guidelines based on their unique experiences and cultural perspectives, this new radio series aims to build capacity, reinforce self-determination, and assist communities to organize to defend their rights.

We interviewed Natives from various areas of the world, and some common themes emerged—themes that we intend to address through this innovative new radio programming. These include the need to spread the word on the Declaration with an emphasis on Free, Prior and Informed Consent. The document and its provision on FPIC is not widely known; of the small minority that have heard about it, an even smaller number actually understands the power it holds within its pages, and an even smaller number utilizes this document for the benefit of their people. Another recurring theme was the need for Indigenous nations to stand together and aid each other in pressuring governments and corporations to respect and honor the articles of the Declaration.

Perhaps the most profound theme encountered was the resonating conviction that the youth need to be involved in this process, for the youth of today will become the elders of tomorrow. A large number of interviewees, both young and old, talked about the involvement of youth as the key to the long term implementation of their rights—and some fine examples of youth taking a stand were on display. One such young person is 12-year old singer, songwriter, actress, and Native activist, Ta’Kaiya Blaney (see page 20). Blaney is an advocate for her people of the Sliammon Nation in northern Vancouver, and has been using her voice on their behalf since she was 8. When asked why she started at such a young age, she replied with a wisdom belying her youth: “I don’t have time to grow up . . . there won’t be a tomorrow if we don’t change today.”

From the interviews conducted in English and Spanish, we were able to produce radio programming ranging from short Public Service Announcements to more substantial and informative 10-minute programs. Some of these programs were premiered to a listener audience in May as part of the Permanent Forum in New York. One listener, an Indigenous woman from West Papua, congratulated Cultural Survival on creating the series and spoke about the importance of bringing the concept of FPIC into the terms of her own people. “This is something that is part of our culture, something we have always known. You can’t just walk into someone else’s garden and build something,” she said.

To bring home the idea of Free, Prior and Informed Consent on the local level, Cultural Survival seeks to form partnerships to translate these programs into as many Indigenous languages as possible, with plans already underway to record in Navajo, Hopi, Hawai’ian, and at least six Mayan languages in Guatemala. The initial 20 programs are already available for download in English and Spanish at www.cs.org/consent.

Great strides have been made in determining Indigenous rights, but so much more needs to be done. Together we can spread the word about the United Nations Declaration on the Rights of Indigenous People, and the power of Free, Prior, and Informed Consent.