Advocating for Economic, Social, and Cultural Rights at the UN: COPINH Participates in Honduras’ State Review 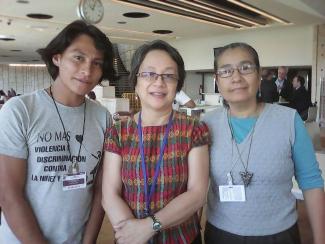 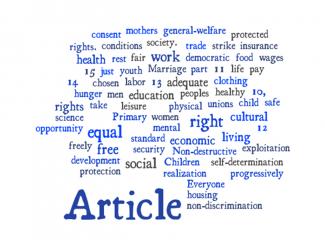 Indigenous communities are increasingly utilizing international human right mechanisms to advocate for their rights. This past June, Honduras’ obligations under the International Covenant on Economic, Social and Cultural Rights were reviewed by the UN Committee on Economic, Social and Cultural Rights at its 58th session. In August, Cultural Survival spoke with Jose Gaspar Sanchez, the general coordinator of sexual diversity and equal rights at the Council of Indigenous and Popular Organization of Honduras (COPINH). COPINH was co-founded by the late environmental activist Berta Cáceres, who was murdered in her home in Honduras in 2015. Cultural Survival asked Sanchez about COPINH’s experience of being part of the review process.

Cultural Survival: Why did your organization get involved in the State review of Honduras?
Jose Gaspar Sanchez: We took part because we as an organization focus on education, health, and community development. The report that the government was presenting was a pretty terrible situation because it showed a different Honduras, another reality. We were there to tell the truth in which we are living, because here in this country, human rights, and especially Indigenous Peoples, have not been respected.

What results did you get in Geneva?
JGS: First we had a meeting with members of the committee that evaluated the government’s report. We also met with different UN rapporteurs and had a meeting with the Special Rapporteur on the Rights of Indigenous Peoples, Victoria Tauli Corpuz, who was bereaved by the murder of our companion Berta Cáceres. Last November she visited Río Blanco, a community in constant defense of the Gualcarque River. We met with her to express the reality of the situation that we are living in. The committee members asked excellent questions when the government presented its report. The government explained about the program “con chamba vivis mejor” (“with a job you live better”), which is a governmental welfare program. But we know it does not bring any advantages and abolishes the labor code achieved in the strike of 1954— employees no longer have the right to bonuses or benefits, which were established in the labor code. The government report also mentioned la bolsa solidaria (support bag), which is a bag with 10 products of basic household provisions, but serves only for political purposes because each bag portrays the image of Orlando Hernandez (the current president of Honduras). The committee raised some questions about these programs, as the government presented a positive picture that we said was not true.

What issues or concerns did your organization raise?
JGS: The first concern we raised was about a request to set up a special office for human rights, which is still in process. [Another] problem that we are facing, especially as Indigenous Peoples, is where the decisions of our communities are not being respected, including ILO Convention 169 and the UN Declaration on the Rights of Indigenous Peoples. Since the coup that took place in 2009, Honduras has been in a serious situation because now all of our territories are being leased to big corporations. There are at least 30 hydroelectric projects, some of them in the Lenca territory, and among these are mining projects and wind farms that were handed over without asking communities who have denounced these projects. We face the militarization of our territories and we have seen how they operate; both private guards and police and military are guarding the facilities of Desarrollos Energé- ticos, SA, the company which our companion Berta Cáceres fought against in Rio Blanco in defense of the Gualcarque River. It is important for us to raise awareness of all the problems we are facing in our territories because we are in a state of helplessness and vulnerability, especially Indigenous Peoples here in Honduras.*

Were the issues and concerns that you raised successfully heard?
JGS: There were very good questions posed by the committee members to the State delegation. Obviously the responses from the State’s representatives were rather poor, as they did not fully answer the questions asked by the committee members. All of the Committee’s recommendations were very good. [However], they need to be implemented. That is the greatest work we have to do; we have to fight to have these recommendations become reality, because there really isn’t the will to comply.

How did the Honduran government respond to the Committee’s recommendations?
JGS: The government was accompanied by people who are radio journalists, such as Radio HRL, America Radio, and national television journalists who were writing about the excellent participation of the delegation in Geneva and on the evaluation of the State report. Here in Honduras, the journalists just showed the positive aspect of the State’s participation, but we know it was not like that. We live in a country where manipulation, impunity, and bribery rule.

Do you think international human rights mechanisms are useful for Indigenous communities in Honduras?
JGS: International mechanisms have helped us bring attention to the struggles of Indigenous Peoples that remain hidden by governments, and they allow us to denounce injustice. We believe that is important, but the most useful part is building international solidarity. This has helped us to denounce the criminalization situation that our organization suffers from. Because we advocate for human rights, especially for the Lenca people and the environment, we suffer criminalization and murder. But at least we know there are people, both at national and international levels, who are aware of our situation and stand in solidarity putting pressure on the government.

After the meeting in Geneva and the recommendations received, what will happen next?
JGS: For us, we will keep fighting to survive here and continue to defend our territories. We will continue our fight in order to have a different country, free from dams, with justice and equality. We will continue on that path, and I think we will move forward.