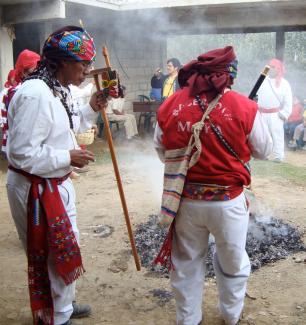 The town of Cajola lies in a valley surrounded by mountains in the highlands of Quetzaltenango, Guatemala. Despite being just a 40-minute bus ride from the second largest city in the country, Cajola feels very much its own: every woman on the street wears the traditional hand-embroidered dress or traje specific to Cajola. It’s 18,000 residents are by large majority Mam Maya, who have
managed to maintain a strong Indigenous autonomy. Traditional Indigenous authorities run the town’s own justice system. In Cajola, Spanish is notably the population’s second language, used only to communicate with outsiders. Many older women only speak enough Spanish to get along conversationally, others just gesture and smile, as did the women who opened the door welcoming me to the community radio station La X Musical, a station run by various Mayan priests and community leaders.

I was visiting the station to learn about the Mayan priests’ expectations and plans for the big Oxlajuj Baktum, the end of the “long-count” calendar cycle that finishes up 5,129 years this December 21, 2012. I sat down with Mayan priest Cruz Ramirez along with two other members of the station. I asked what I thought was the obvious question, what does December 21, 2012 mean? What are they expecting? They spoke a bit in Mam, then looked back at me with blank expressions, indicating that this was just another cycle change. “Oh... yes, that… They say that it’s like a flower, that sprouted, grew, blossomed, and wilted, and now it will grow again. That’s the change that they speak about.”

I asked what ceremonies they planned on celebrating this year. They told me about all the different sacred prayer sites at the mountain peaks around the Cajola valley, more than 10 in total. They wrote down the names for me in Mam, explaining the literal translation of each. They pray to the father of wind, at the peak of the hill known as K’man K’qiq. At Twi Sacbakin they pray that the winter’s hail storms won’t destroy the corn corps. At Twi Kojla “the head of Cajola” they pray for the well-being of their community— and for their radio station. The most important celebration is a series of ceremonies that welcome the rainy season, held every year in early May. Over half the town’s population participates by giving small offerings of candles, sugar, or incense. A pilgrimage is made to the Pacific coast, stopping to perform prayer ceremonies at five sacred locations along the way. The sixth and last is held at Twi Caula, another peak above Cajola, and lasts overnight. If they didn’t pray, the corn would be lost to frost, the rain would flood their homes, and conflict would rise in the community.

They explained: “What we know is what our ancestors have left for us; that’s how we know to arrange a Mayan ceremony with yellow candles in the south, white in the north, red where the sun rises and black where it sets. You can even read that in books now, but we learned through generations, from our fathers’ fathers. We maintain the knowledge we learned from them.”