Synopsis of the State of Indigenous Radio in Mexico Report

Recently, Cultural Survival expanded its work to Mexico, a country where there are many radio stations dedicated to serving Indigenous communities. Cultural Survival’s mission in Mexico is to support the various organizational processes of Indigenous Peoples. We conducted research and analysis to better understand the situation of Indigenous community broadcasting in the country and to be able to design strategies that support Indigenous radio stations in claiming the rights of their communities.

Cultural Survival believes that community broadcasting is an electronic communications platform to share ideas and worldviews. However, Indigenous Peoples and Indigenous communities have been limited and at times denied their right to communication through the lack of access to the frequencies on the radio spectrum. Cultural Survival has stood in solidarity with Indigenous Peoples’ struggle for the democratization of communications and the radio spectrum as it is fundamental right for Indigenous communities to access information and exercise their freedom of expression.

With this research we intended to create an overview of Indigenous radio broadcasting in Mexico. Cultural Survival would like to thank our collaborators from the World Association of Community Radio Broadcasters (AMARC) Mexico; Dr. Graciela Martínez Matías, an academic from the Autonomous University of Mexico City and the National Autonomous University of México, for contributing to this study and the Ford Foundation in Mexico for making this study possible.

Premise of the study

1. Obtain indicators on the exercise of Indigenous Peoples’ right to communication in Mexico.

1.1 To know how many Indigenous communities exercise their right to communication through the management and operation of a radio station.

1.2 To know the number of concessions granted to Indigenous communities since the passage of the Federal Telecommunications and Broadcasting Law in 2014.

1.3 To obtain data on the different organizational models, the needs and the challenges that Indigenous communities face in operating a radio station..

Data on Indigenous Peoples in Mexico

According to the National Commission for the Development of Indigenous Peoples (CDI), in 2015, 12,025,947 Indigenous people lived in Mexico. The National Institute of Indigenous Languages ​​(INALI) points out that 68 Indigenous languages ​​are spoken in Mexico with 364 variants, belonging to 11 linguistic families, which makes it one of the most diverse countries in the world. 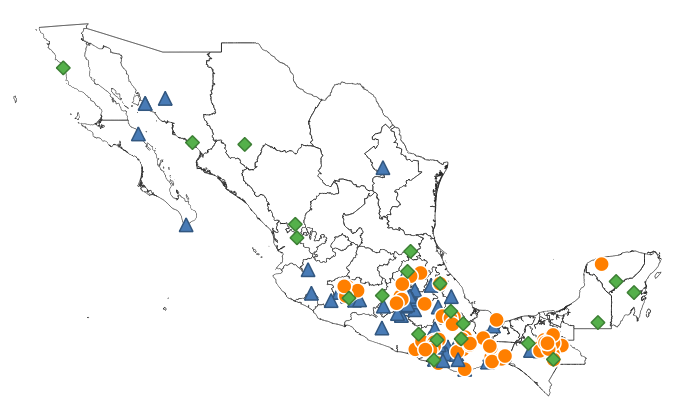 Map of the states of Mexico where the community radios are located (blue), Indigenous radio stations (orange), and Radio Indigenista stations (green).

Communication is the exchange of meanings between members of a community in a specific cultural context where the members share the same codes. Community members share common identity elements belonging to the same culture. Communication is a series of social and symbolic processes of appropriation and recreation. In this context, Mexican Indigenous Peoples have fought for the right to communicate, demanding the human right to have public spaces for the discussion of news and events relevant to their communities.

Radio is a media that despite new global trends is very popular among Mexican audiences. According to the 2016 National Audiovisual Content Consumption Survey conducted by the Federal Institute of Telecommunications (IFT), interviewees who had a T.V. was 96% with an average of 1.9 devices per household, 66% of the interviewees listened to radio content through radio receptors, while only 21% used their cell phone. Of the people who listened to the radio, 86% listen at home.

In Mexico, in addition to the radio stations and government institutes, we identified another group of actors that are an important part of Indigenous radio broadcasting: social organizations, which have played an important role in supporting Indigenous radio stations. These organizations have been participants in the birth of stations, have accompanied them in this process and have helped with the acquisition of equipment through funding and financing and provided technical training in operation and management of the equipment. Others, such as the National Congress of Indigenous Communication  and the Second Summit of Indigenous Communication of Abya Yala have accompanied and collaborated in advocacy and helped create national discussion on Indigenous broadcasting spearheading change of the Federal Telecommunications Law and Broadcasting. These organizations also produce information and radio material to feed the programming of the radio stations.

There are organizations that accompany stations and communities in the process of acquiring concessions and broadcast licenses. Other organizations have provided legal defense, mainly to non-concessioned radios. Each organizations has different objectives, some work exclusively with a certain group of radios and are located mainly in Mexico City and in the states of Chiapas, Oaxaca, Michoacán and Puebla, where most Indigenous radio stations are present. The organizations who contributed to this study are: Boca de Polen; Ojo de Agua Communication;  Redes, A.C.; SURCO; MAIZ; Japexunk; and AMARC-Mexico.

Prior to the recognition of the right of Indigenous communities to operate and manage their own media, the Mexican government devised a way to address the information needs of these communities within the National Indigenous Institute (now the National Commission for the Development of Indigenous Peoples-CDI), the Indigenous Cultural Radio System (SRCI), created in 1979 with the aim of transmitting and disseminating Indigenous languages, cultures, traditions, and music.

The following are international and national laws in favor of Indigenous Peoples’ rights and Indigenous media.

• United Nations Declaration on the Rights of Indigenous Peoples (2007), Article 16.

• The Federal Telecommunications and Broadcasting Law of July 2014. 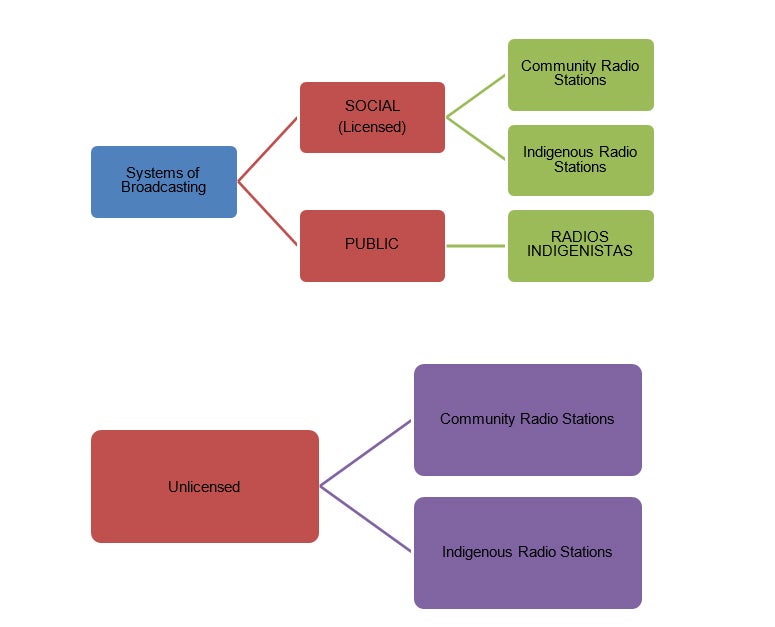 In the Mexican context, there is a difference between community media and Indigenous media. According to the World Association of Community Radio Broadcasters, AMARC, a community radio station is "a variety of names, their practices and profiles are even more varied. Some are musical, others militant and others musical and militant. They are located both in isolated rural areas and in the heart of the largest cities in the world. Its signals can be reached in a radius of one kilometer, in the entire territory of a country or in other parts of the world via a short wave…” (Waves for freedom. Report of the sixth assembly of radio stations Communities, Dakar, Senegal, 23-29 January 1995.)

According to the Federal Telecommunications and Broadcasting Law, a community broadcasting licence is granted to civil society organizations that do not pursue or operate for profit and that are constituted under the principles of direct citizen participation, social coexistence, equity, equality of gender and plurality.

In the Register of Granted Social Concessions of the IFT, the total amount of community broadcast licenses in Mexico is 50. In the Cultural Survival database, we have identified 20 more operating that do not have an operating licence and in the AMARC database there are 3 more. We conclude that in Mexico there are approximately 73 community stations present mainly in the states of Oaxaca (23), Michoacán (14), State of Mexico (6), Morelos (4), Chiapas (3), Sonora (3), Guerrero (3), Mexico City (3), Jalisco (2) and Baja California Sur (2). 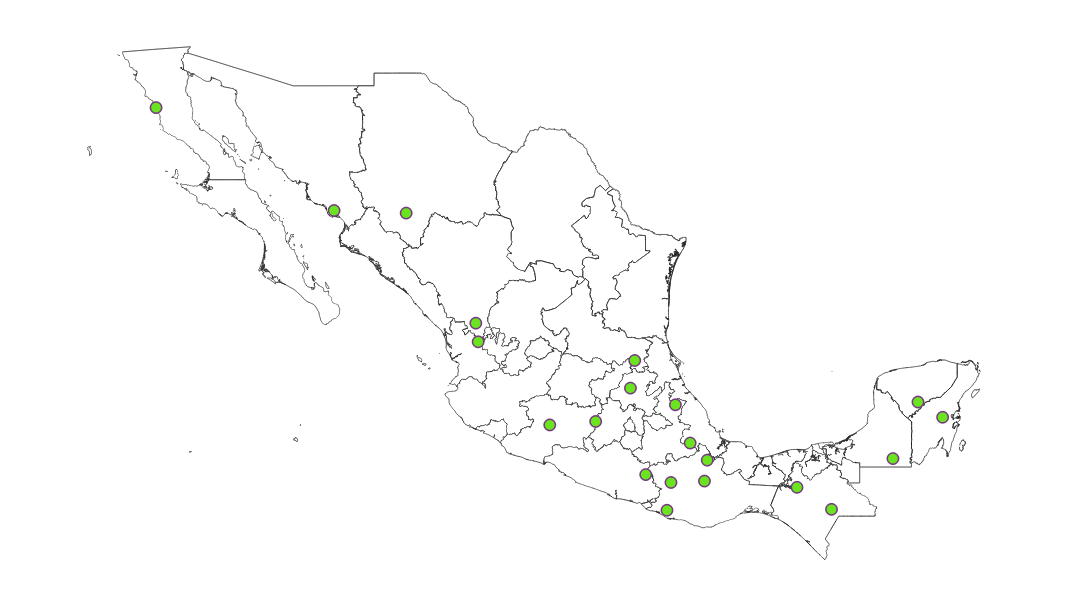 
Radio Indigenista stations are ones which are managed by the State but also broadcast to Indigenous communities. The whole broadcast process and equipment belongs to the State.  Radio Indigenista stations belong to the Sistema de Radiodifusión Indigenista, which are part to the Instituto Nacional de los Pueblos Indígenas (until December called Comisión Nacional para el Desarrollo de los Pueblos Indígenas). 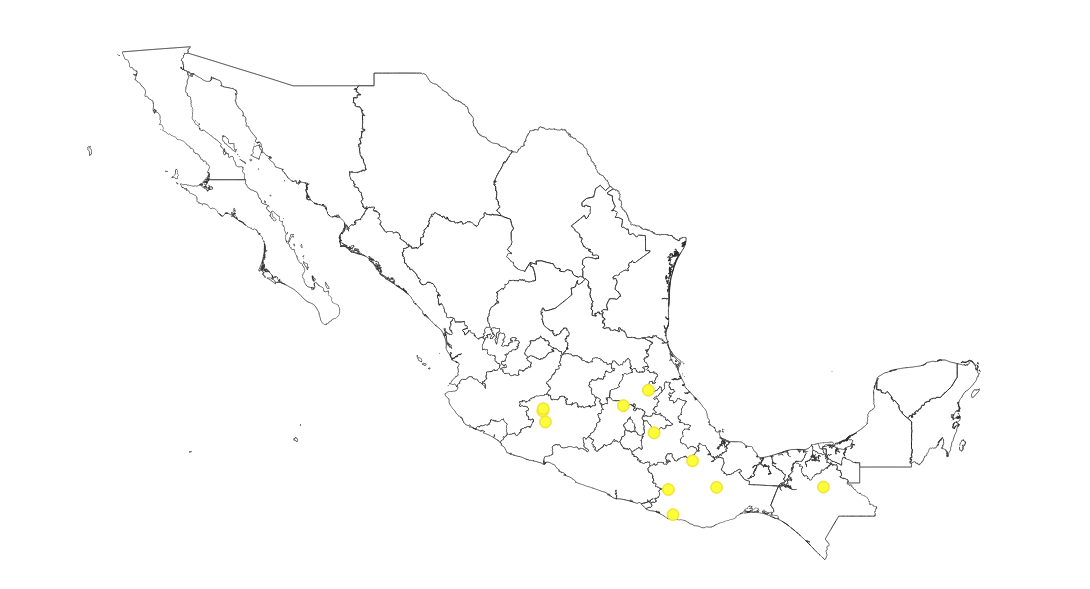 In 2004, after a two-year legal process and advocating with federal authorities, including the former regulator of radio frequencies-- the Ministry of Communications and Transportation, AMARC México obtained 10 licenses for community radios, among them 2 Indigenous radio stations in the state of Oaxaca: Radio Nhandiá de Mazatlán Villa de Flores and Radio Jënpoj de Santa María Tlahuitoltepec. Subsequently, the Community Cultural Radio Gi ne gä bu he th'o of Hidalgo, also obtained a permit. Indigenous media has been in existence since the 1970's, however, no community, people or Indigenous organization had access to a legal framework that guaranteed them right to operate their own media. In 2001, that right was included in the second article of the Constitution, but it is not until 2013 this right was made operational in the Constitutional Reform and in 2014 in the Ley Federal de Telecomunicaciones y Radiodifusión.

Indigenous communities did not wait for the permission of the State. Various social, economic, and political factors between the 1970s and the 2010s propelled them to develop their own media without asking the State for authorization. It does not matter if the legal conditions have changed, the action of taking to the airwaves has been linked in several cases to community organizing which sought to broaden autonomy and self-determination, defense of Indigenous lands, including air space, which includes the radio frequency spectrum.

We conducted 20 interviews with personal of radio stations. Three of those radio stations belong to the Sistema de Radiodifusión Indigenista (public radio stations), so were not considered for statistical purposes as they are not Indigenous. Of the 17 stations, 6 were licensed and 11 were not licensed. The radio stations that participated in the study were located mostly in the states of Oaxaca and Michoacán, in rural or semi-urban communities. Most of the stations have a basic infrastructure for their broadcasts, with the exception of Huayacocotla Campesino Radio. None of the other interviewees transmit with more than 150 watts of power. The geography of the locations of the radios is varied, some are located in the mountains, such as the Radio JenPoj of Santa María Tlahuitoltepec, Oaxaca, and San Juan Nuevo Parangaricutiro, Michoacán.

For various reasons, for many radio stations the legalization process is still complex and expensive or having a licensed station implies buying equipment approved by the IFT.  Because  IFT has to prove the legal possession of radio equipment, only 3 Indigenous stations with no license out of 11 stations were interested in obtaining it.

● People participating at the stations range is from 8 to 60 years old. On average, participants are under 35 years old.

Topics Addressed in Programming:
Stations reported on producing programs on the following topics:

Most of the radio stations interviewed operate through the collaborative work of the people of the community who participate in running the stations. People support themselves through other employment or economic activity, as in the case of the licensed Radio Ma Nguhe de Hidalgo, where the majority of its members are farmers, bakers or masons. Most stations started their broadcasts with minimal technical equipment that was purchased by communal authorities. Some stations charge a fee for broadcasting spots, others organize sales of services, organize markets or sell food to fundraise for the stations. Some receive voluntary contributions or manage social projects to obtain financial resources.

Decision making in the 17 radio stations interviewed is conducted mainly through  the following bodies:

1. The Greater Council of the Community, which in turn delegates control of the radio to the Youth Council.

4. The authorities of various peoples

8. Council of the radio

Needs of the Stations

In various degrees, all stations have technical, personnel, and equipment needs. Those stations that are in the process of installation say they need "everything"; most of them expressed more concrete things such as staffing, equipment or financial support such as: scholarships for youth, recording booth, mobile equipment, transmitter, tower, antenna, regulated voltage, reporting recorders, microphones, headphones, audio editing table, computers, projectors, internet access, solar panels etc.. This may be due to the fact that the majority of the stations transmit with the equipment that they started, and at times the equipment is already old and outdated.