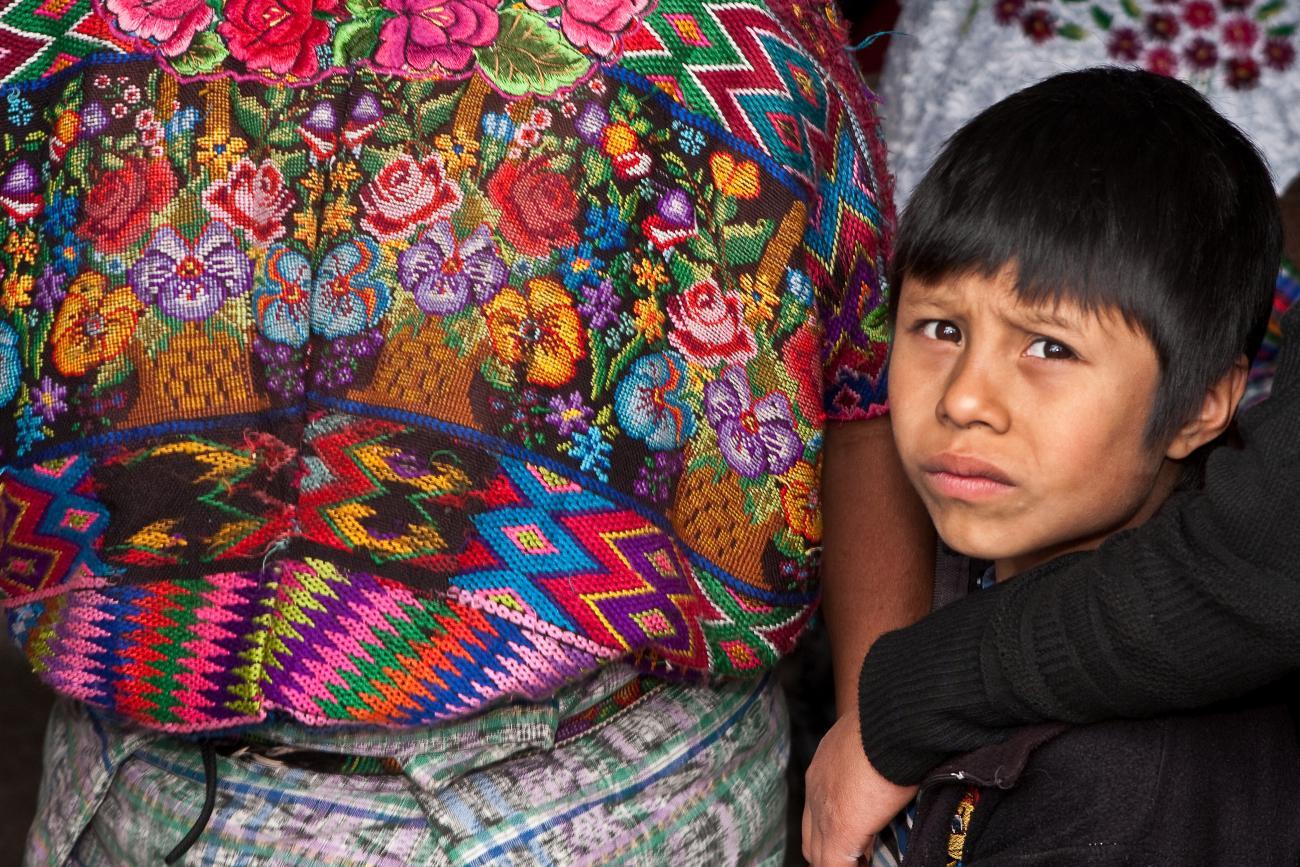 I was born Indigenous, but I didn't recognize my identity, did not realize who I was until two decades later.  From the time I was a boy, I or others, frequently marked the box for Indigenous, while at the same time marking the space for ladino or mestizo to describe my ethnicity--on exams, at health centers, for birth registration, for the census, and in the university. And I didn't understand anything about it. I didn't understand that something was taking shape in my consciousness and that it would be reflected in my behavior.  I thought perhaps it had something to do with the color of my skin and my appearance, the striking contours of my body, my black hair or perhaps that I worked in the rural areas. But I was not sure about that. What I was sure of was that I fit better in the box marked Indigenous. Be it ideas I got in school from my teacher, at home, from TV or on the street, I fit into the Indigenous box. There was no other option. There I belonged, inside the apex of ethnicity, people or race. I internalized it, unconsciously, without much sense of uniqueness. It was my normality.  And so, I was defined as Indigenous without knowing what it meant to be Indigenous, without consciously taking it on.

I don't remember my mother or my father or anyone else speaking to us in Kaqchikel except my maternal grandmother. She was the only one who communicated with us in the language. She didn't talk about our ancestral history passed down from our grandparents. Sometimes we talked about ghosts, spirits, lost souls, prayers, but not about our history. Most likely, those ways of thinking were discredited or undervalued:  living or reliving that which was not present, e.g. the Kaqchikel language, respect for Mayan ceremony, the Mayan calendar cycles, knowledge about caring for elders, community practices.

For my family and me that way of living was something foreign. There was an absence in our home life, something missing which was not obvious.  In my home Spanish was spoken, life conformed to the renowned Gregorian calendar--Christmas, Holy Week between Palm Sunday and Easter, Virgin Marys and Jesuses with many names, a local fair, Independence Day, The Day of the Dead and Saints, work shifts, official academic calendar routines. One looked for meaning in worldly existence through a morality based on the Bible and Roman Catholic doctrine.

At school it was the same: the Bering Straight, the splendid and ancient Mayan civilization--its world now extinct, the caravels of Christopher Columbus, polytheistic religions, pagans, brutality, Pedro de Alvarado and the heroes of the Spanish Conquest, the colonization, actors of independence . . . and the Indian. Dates and players with Spanish surnames. In the end, these are the general themes of textbooks used in Guatemala.  I have never heard the version by those who were conquered:  We, the Indians.

Throughout my educational path, from primary school, into middle school, high school and including the university, we are not present in the official history. We are given little importance, or we were seen as passive subjects, often times as victims.  But nothing more. The period in which we were included, exclusively, was that of violence (**The Thirty-Six Year Internal Conflict):  names, many names of dead people, disappeared, kidnapped, tortured, with Mayan last names.  In that piece of history we appear as silenced but unpunished. Yet, I have learned that we were present in other ways, not only during the conflict, but also in other events where we seem alien, far away and distanced.  To the extent that our voices of resistance rise, our role is reclaimed as important, a struggle I have claimed as my own.

My arrival at university was almost a privilege.  As the son of a rural health technician, a humble rural person, and as one in a long queue of seven children and living 82 kilometers from Guatemala City where the university is located, going to college was not part of my plans or thinking.  I enrolled in the Law School at the University of San Carlos, a place where the unpacking of the academic and ethnicity can arrive at a level of frivolity.  I hid away in the university library with books by Guzman Bockler, Marta Elena Casaus, Miguel Angel Asturias, Severo Martinez Pelaez, Figueroa Ibarra, Eduardo Galeano, PopVuh, el Memorial de Solola, el Rabinal Achi as my companions.  And then decided to study political science.

The process of choosing this major opened up the possibilities of a variety of academic areas in the social sciences, a chance to study history, to develop critical-thinking skills.  And I got involved in the student movement.  I adopted new ways of seeing reality--initially, through a lens of Western political theory; but later on, because of authors such as Boaventura de Sousa Santos, Aura Cumes, Gladys Tzul, Dorotea Gomez Grijalva and the epistemology of the South, it became based in community politics, political experiences in the Indigenous movement.

My experiences in the student movement were shaped by the student representation recreated as the Association of University Students.  For me it was place for reflection, formation and political action in the context of student activism.  From there I could redefine myself in an environment of diverse conversation, discussion and dialogue regarding revendication and current topics in new surroundings.  It was a place were I could consider subjects such as defending territory, Mayan identity and spirituality, historic memory, racism, the women's movement for equal rights, violence against women (like assault and sexual harassment, male domination and the patriarchal system, sexist ideology and misogynist practices) as well as social inequality, severely asymmetrical power relationships, the struggles of the LGBTQIA+ community, rights for children, youth, civil movements for transparency, anti-corruption and many others.

Nevertheless, I realized I must talk about and discuss the topics of community, the Indigenous, the struggle of First/Original Peoples.  Located on campus and in the city, I was and continue to be an authentic escapee. There is/was an absence that is not filled, an empty vessel without vital experiences and the daily life of the community.  It casts a shadow over the voices that rise up from there and enshrouds significant problems.  It is an incomplete construction.

At that moment of realization I took on a full-fledged consciousness and thought process of being Indigenous.  Not only was I Indigenous, born Indigenous, my very essence is Indigenous. I am an Indian. So there!! I am a young Maya Kaqchiquel. It is a voluntary declaration, not off some blank page, rather anchored in everything supported by collective memory, history and the rising tide of ancestry and all it implies and all I had learned.  I accepted being it; I assumed my identity with full authenticity.

This act of self-recognition represents a thoughtful approach and a direct critique of our individuality, of the world, of nature, of our family, our friendships, vis-a-vis our adversaries. For me it is also a political position, an epistemic one, a human one, an ethic found as one traverses the development of one's formation, a snapshot of consciousness of my identity as a subject of individual and collective rights, currently and from my daily experiences in the community.  It is the consequence of the need to listen, to learn and to shout with one's own voice.

Even with the full awareness of being Indigenous, the act of coming to terms with and recognizing my identity, was empty.  This feeling of being, of belonging to a People, to a community, without being a participant among the people, operating within the community, takes all the authenticity away. Because of that, after some six years, I returned to my community, Chixot, to open myself up to the life experiences that were always present there gestating from a long time ago without me even realizing it. Since my self-recognition as a Mayan Kaqchikel I returned to participate in various parts of the community to reconstruct and heal a broken identity.

My experience portrays the life of hundreds of Indigenous youth trying out a path towards self-knowledge, self-acknowledgement and the challenge that represents.  It is an experience as much for those of us with more privilege, with access to education, as it is for those who do not have such privilege, who live in our communities and come up against the usual institutions and organizations, the producers and reproducers of principles, discussions and practice of coloniality ("internalized colonialization"), e.g. the family, the school system, the church and the government. These places are experiences which impede the blossoming of self-knowledge/self-recognition based on ancestral Mayan perspectives and the struggles involved. But they unleash transition towards a place of reflection and discovery of being an Indigenous Mayan. This dose of consciousness, i.e. this convergence of being in a temporal state and the essence of being in a state of grounded self-determination and the experience of human existence as a person with rights belonging to the Mayan people, is fundamental.

What can we do to facilitate this process of recognizing who we are? It's imperative to create and recreate these local, community-based and permanent spaces for personal development, for dialogue, for meeting within a Mayan context, recapturing and revitalizing its wisdom and spirituality, its art and knowledge, historic memory and resistance which promote self-reflection in order to take on our identity with full consciousness, memory and attitude, and to continue constructing and reflecting based on vital practices of the community. We must search for places that contribute to change in daily material life and the consciousness of ourselves, Mayan youth, just as we accept the challenge of opening up to reflect on demands and struggles of others' resistance.  We must do this to weave together our collective strengths. This critical project from us, young men and women of the Mayan, is an urgent milestone of what has already begun.

--Jhonatan Marlon Noé Sotz Son is a young student from the Mayan-Kaqchikel People of Chixot, San Juan Comalapa, department of Chimaltenango, Republic of Guatemala; poet, researcher and student of Political Science with a Major in Public Policy, and of Law and Social Sciences, Advocacy and Notary.

*  An understanding of ethnic identities and labels used in Guatemala is important.
1.  Indigenous refers to the more than 20 Peoples, descendants of the Mayan Peoples, could also be referred to as the First Peoples of Guatemala, southern Mexico, parts of Honduras, El Salvador and other regions of Central America.  In Guatemala many Indigenous people's first language is still their sub-group's Mayan dialect, resulting in identity defined by language spoken, e.g. Ixil, K'iche, Chuj, Q'eqchi, Mam, Kachikel, etc.  In total, 21 Mayan languages, plus another Indigenous language, Xinka, not a Mayan dialect.
2.  Mestizo is used as it is in other Latin American countries, indicating a person of "mixed blood", and particularly in Guatemala, the word implies that the individual has not maintained the language and culture associated with his/her Indigenous parentage.
3.  Ladino, although often used synonymously with mestizo in Guatemala, this term also includes children of born to foreigners, mestizos not acknowledging their Indigenous background, Caucasian Guatemalans.
4. Criollo is synonymous with ladino but implies white and wealthy.
There is racism and economic disadvantage associated with these distinctions:  in general, the more one is seen as Indigenous, the more discrimination experienced and the fewer economic opportunities available.

**  The Thirty-Six Year War, often referred to as The Internal Conflict included genocide against the Indigenous Maya of Guatemala.  The conflict was initiated and facilitated by the United States Central Intelligence Agency.

***  Coloniality of being and power is the concept of a historic continuum which reproduces, in the post-colonial societies, the values and beliefs of Western Modernity (quoted from "La colonialidad del ser y del poder:  la mitologización del Desarrollo en América Latina"  a paper by Juan David Gómez-Quintero published in El Ágora USB, Vol. 10 Núm. 1 (2010).  In less academic language, one might say "internalized colonialism", i.e. defining oneself from the point of view of one's own oppressor, e.g. as "other" or "less than".