World Health Day: The Role of Indigenous Peoples in Protecting the Planet and Biodiversity 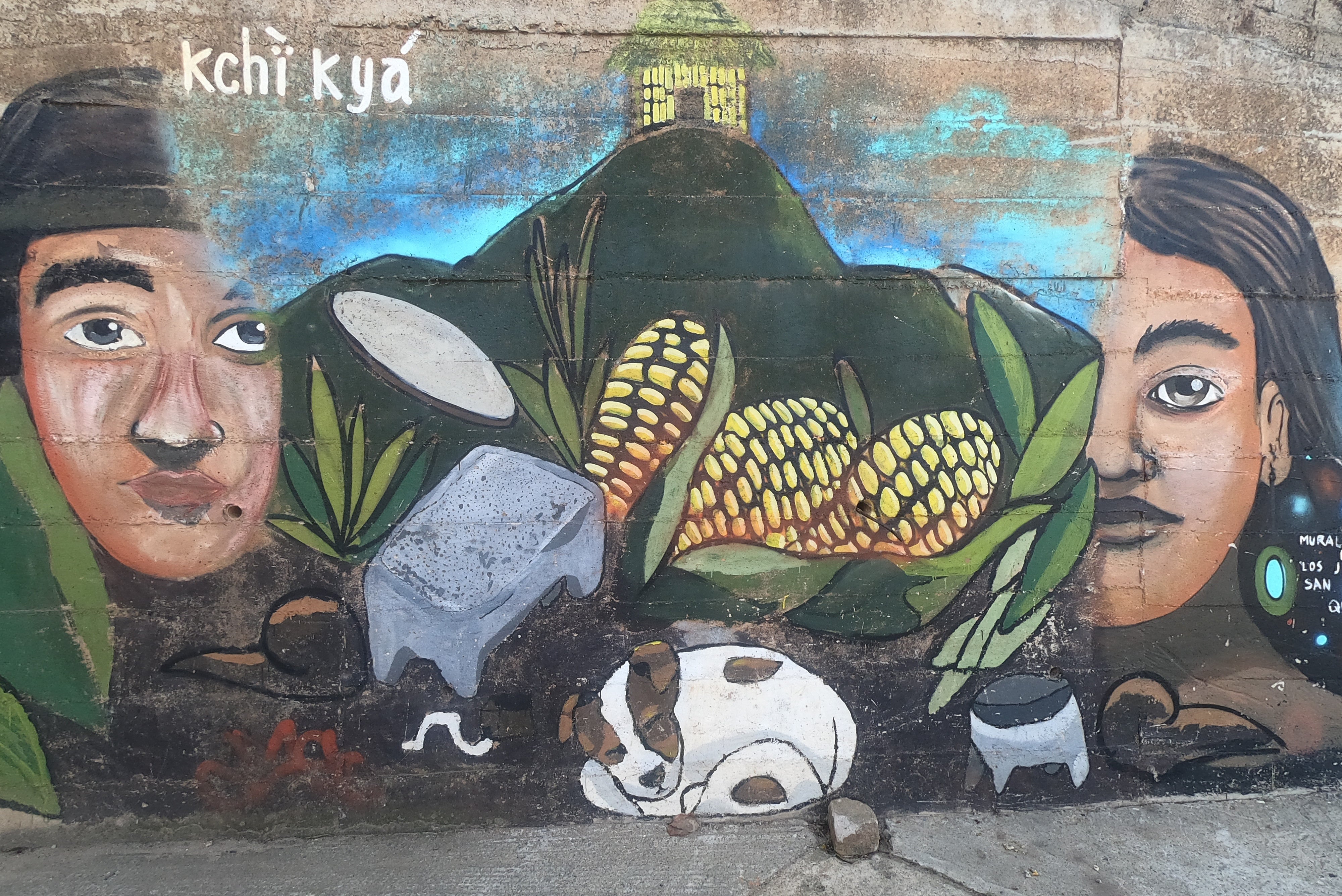 World Health Day is celebrated on April 7 to mark the founding of the World Health Organization in 1948. The theme of World Health Day 2022  is "Our Planet, Our Health.” Cultural Survival’s Indigenous Rights Radio Program conducted interviews with Indigenous keepers of native seeds and ancestral ways of planting. They share with us the important role that Indigenous Peoples play in caring for the planet, and the health of all beings who inhabit it.

Despite the international recognition of the right to health, full access still represents a challenge. Indigenous Peoples lack decent health services provided by States, so we have sought and built alternatives. Throughout history, we have taken charge of guaranteeing health and life in our territories through practices such as traditional medicine. Although Indigenous Peoples represent only 6.2 percent of the world's population, we manage and maintain ownership of more than 25 percent of the earth's surface and support around 80 percent of the world's biodiversity. Many of the ecosystems that sustain the environmental viability of the planet, including forests and jungles, are under our protection. Likewise, in our territories, we continue to practice ancestral planting methods in which the use of agrochemicals is avoided, and we are fighting for the preservation of non-genetically modified native seeds. 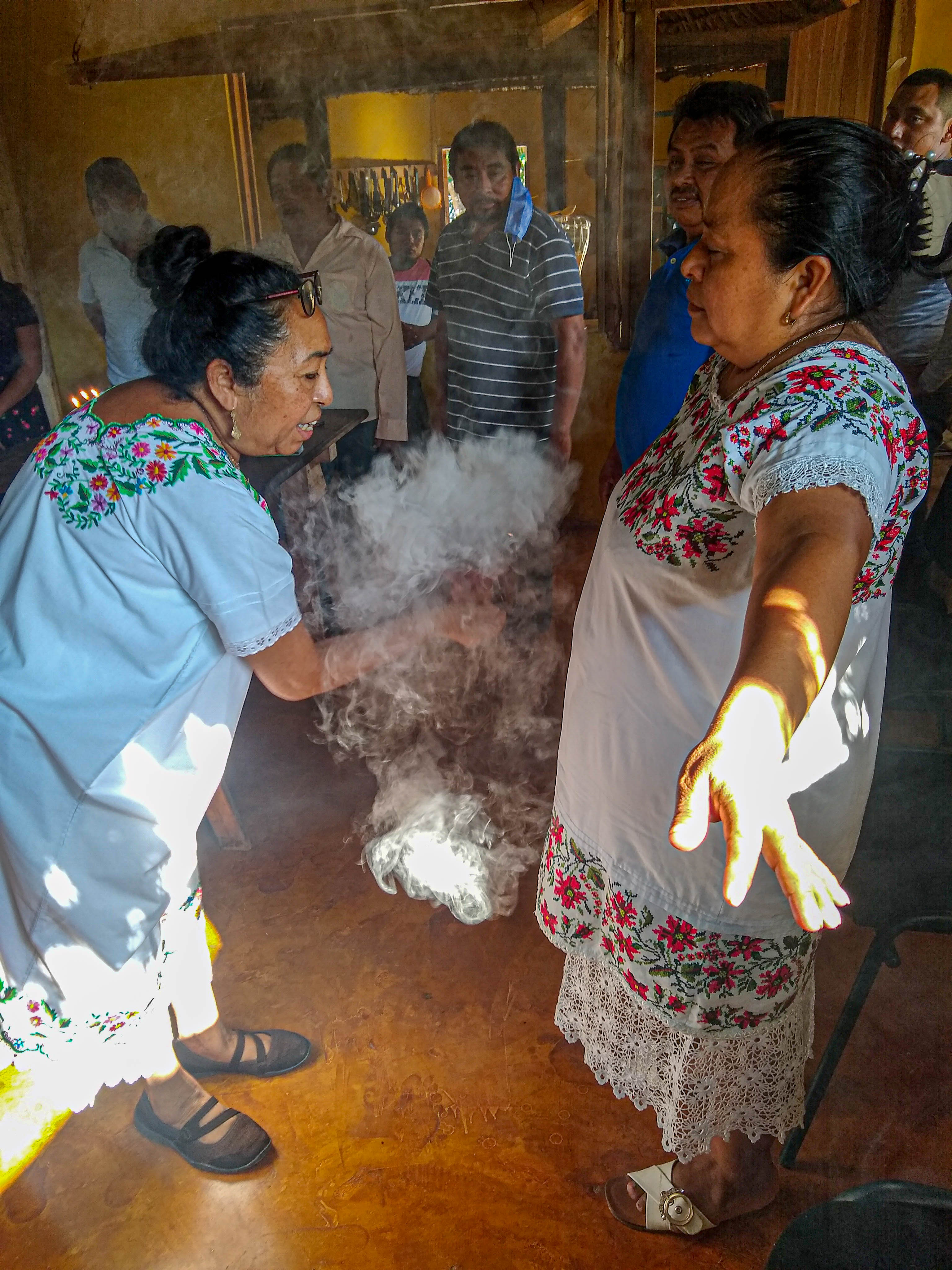 
Margarita Asunción Noh Poot (Maya) is a seed and health keeper from Yucatan, Mexico, and a health promoter at Noj Naj Community Center.

“As a keeper of seeds in the south of Yucatan, Mexico, I have been discovering that for the care of seeds we need to heal. I am also a guardian of health and biodiversity, where we find the medicine for which our grandparents and grandmothers cared for generations for more than 3,000 years.

Health is being well with oneself, with one's brothers and sisters, with Mother Earth, with the hearts of heaven and earth. There are principles that we have forgotten due to modernity, but our grandparents continue to respect Mother Earth, to ask permission before taking the medicines that will help us heal the body, the spirit, our energy, and our feelings.

We have learned that we should not take more than we need. Our service as healers and healers in this town is a free service because we have given these gifts to heal, to live in peace, and to preserve Mother Earth and all its diversity. The relationship we have with the land and with our sacred corn is part of our spirituality to be able to live in peace, to be able to serve our brothers and sisters, to heal what touches us. There are healers who safeguard this knowledge for future generations.” 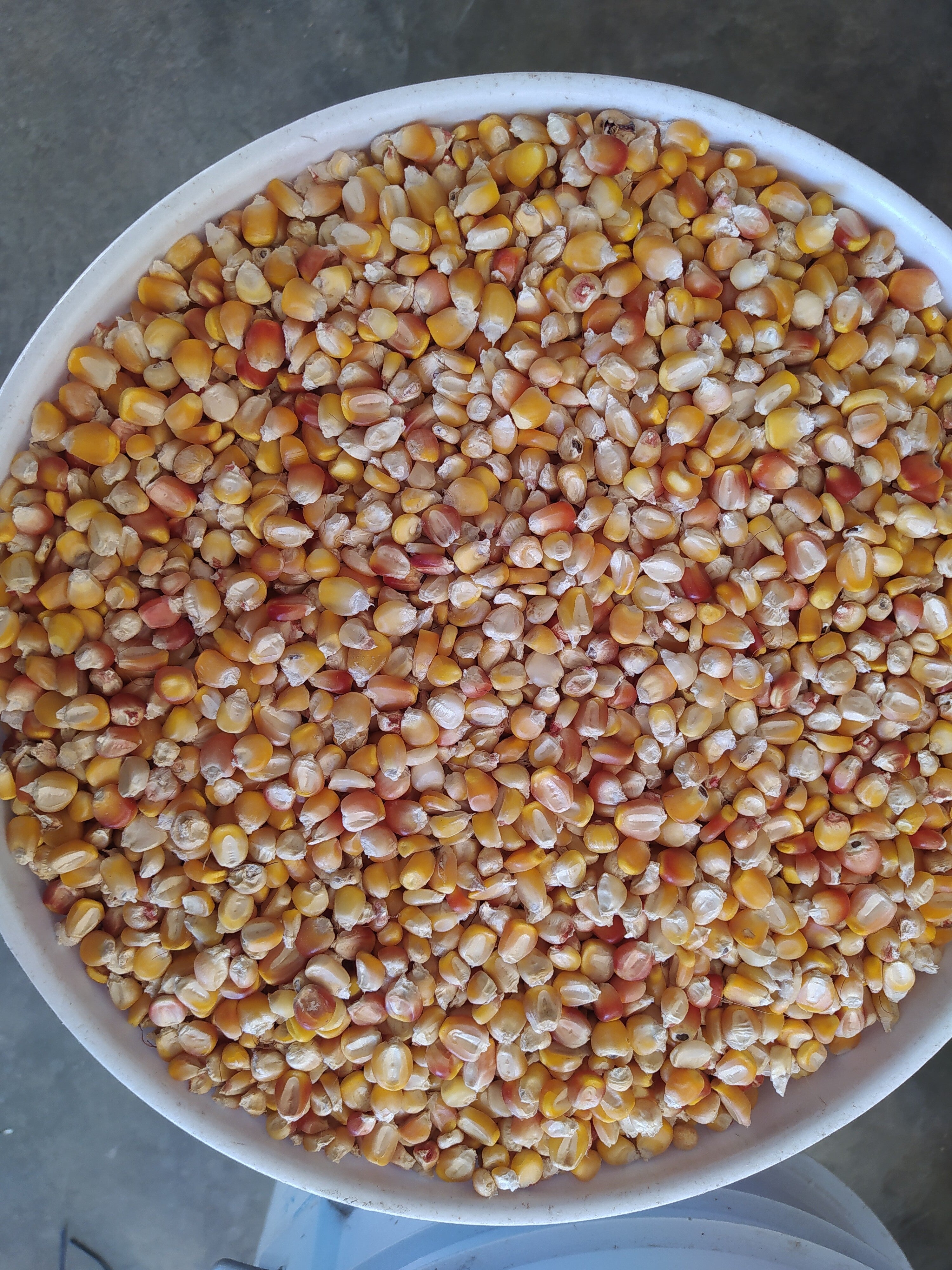 Safeguarding our seeds is a task that we Indigenous Peoples have carried out for centuries. In recent decades, this work has become more urgent and necessary due to the threat posed by genetically modified seeds introduced by transnational seed companies.

“Indigenous Peoples in Mexico and around the world were the ones who domesticated the seeds of the plants that are our food today. Without this patience, effort, and dedication, several of these plants would not exist, such as corn. We will not find corn in the wild as we currently know it as a plant that totally depends on the human hand to reproduce. Many cultures of Mesoamerica depend on it for their physical and spiritual nourishment.

The free exchange of seeds and their adaptation to other places is what makes human [sustenance] possible. It is necessary to give credit to this work that has been developed in many places and is responsible for today’s genetic diversity. Unfortunately, seeds are now seen as a big global business and they are modified naturally or through genetic biotechnology for profit. The big seed companies are modifying our food tastes by making seeds and their fruits with the sole intention of having greater control through restrictions on their use derived from patents. One of the struggles of campesinos of the world is for seeds to be free.

In the past, different ways of growing crops were developed. In Mexico, the chinampas, the slash-and-burn system, planting with cuttings, and the Egyptian plow are still used today. Soil fertilization has been done with a combination of plants as in the milpa system, with corn, beans, squash, or fertilizers from animals or natural ferments. Agroecology has learned from Indigenous Peoples and campesinos that there are many natural ways of planting, fertilization, irrigation, and pest control. This diverse form of production, on a small scale and intended for local consumption mainly, produces healthy food that promotes human and animal health.

In contrast, the large seed companies, the producers of agrochemicals and machinery, as well as the large food chains, want monocultures produced agroindustrially to be the ones that feed the world. They have designed seeds that can withstand aggressive agrochemicals such as glyphosate, which is mainly used in transgenic crops. Their machinery, fertilizers, pesticides, and irrigation systems erode the land and pollute soil and water, causing damage far from the places where they grow their produce.” 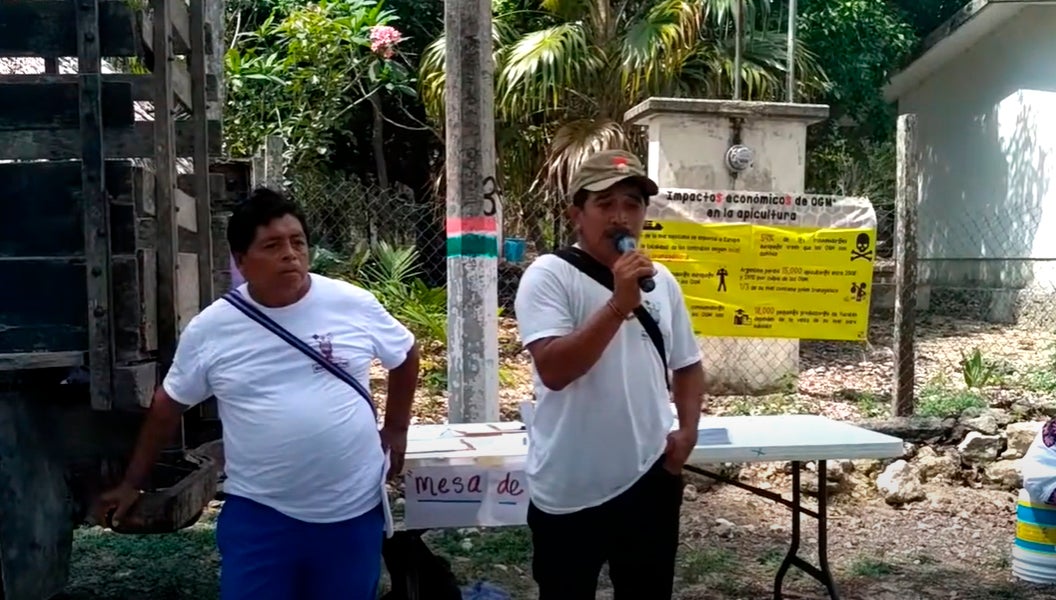 In the Yucatan Peninsula, Indigenous Peoples and farmers are working to save their native seeds, especially those that are part of the traditional milpa. The milpa is an agricultural system inherited from the great Mesoamerican civilizations, which has corn as the main element for the sustenance of life, along with beans, broad beans, squash, chili peppers, and other food plants.
Heber Uc Rivero speaks about the protection work carried out by the Much’ Kanan I’naj Seed Collective:

The Seed Collective was born in 2003 after Hurricane Isidoro, as many milpas were affected. We work milpas with the cultivation of various seeds. Beans, squash, corn, sweet potato, jicama, cucumber, chilies, and watermelon are integrated, embraced, and sheltered. Hurricane Isidore affected these crops causing the loss of several seeds, especially varieties of corn. Some seeds were recovered from the same region, but we also had to resort to other areas of the  Yucatan Peninsula.

This process of searching for seeds also created an opportunity to discuss policies that the State was carrying out in relation to the preservation and care of seeds. These elements were also key to recovering and defending seeds. This defense begins with a sense of belonging. That rootedness, that identity of being Indigenous, this way of understanding seeds as part of what makes us a Peoples.

The Seed Collective initiated intercommunity meetings, Seed Fairs. For 15 consecutive years, the Seed Collective has been a promoter of these fairs where farmers exchange their seeds and knowledge and strengthen small intercommunity networks. We are also able to raise awareness about transgenics. Monsanto, Payoner, Dupont, and Syngenta were also marketing their seeds at this time and we started an information campaign in the ejidos to inform about the impacts that this would generate for community life, such as deforestation, monocultures that employ excessive use of pesticides, and in general, the model that seeks to commercialize the life of seeds.

The Colectivo de Semillas informs with the intention of defending a way of life rooted in the milpa system. Assemblies in the ejidos now have access to information to be able to decide if they want to allow the use of these seeds in their communities. In some cases, ejidos have assumed the commitment to care for their seeds by establishing internal regulations where they have prohibited the use, cultivation, and handling of transgenic seeds on their territories. These events have been very important because they generate a level of awareness, and at the same time generate legal action for community agreements on their prohibition.”

The Milpa Is Health and Happiness

Safeguarding our native seeds and our ancestral ways of sowing guarantees food and health in our territories. For many Indigenous Peoples, “the milpa is health and happiness.” Esther Poot Cajun from Quintana Roo, Mexico is a member of the Tierra de Mujeres Collective. She says,

“Life for me is in an ichkool, which is the milpa. It is a sacred place with all the elements that allow this life where food is sown and harvested. This is done with the ool, the spirit. Its process is very delicate and according to the times and rhythms of the land, and also of the koolnal master, the campesino, who is in constant communication with the earth and the seeds.

Feeding the ool with everything that reproduces in this holy ichkool becomes food and medicine, and this empowers food security. When there is weakness in the being, people always look towards the milpa because it represents hope, strength, and spirituality. Every time we get sick, there we find our medicine, and if we get hungry there is also our food.

In the corn there is always faith, and when it grows in the ichkool, in the milpa, it always represents that joy, smile, and fullness, from the moment of harvest to preparing the first tortillas, to preparing this first holy u'kul, this atole for family or community consumption. The milpa represents this life, this strength, that depth from drinking, eating this holy atole that nourishes and strengthens the being.

The milpa is not only the cultivation of a large number of plants together with corn, but it also uses seeds that are highly resistant to pests because they are adapted to our territory, which allows these seeds to be cultivated again. This is linked to a philosophy that promotes the life of the community from beginning to end. These seeds are always sovereign. They are our guardians because they tell us about the origin and reproduction of life as well as their own essence, which belongs to the earth. They are the force of the sacred, and it is so important to conserve them and to strengthen the food sovereignty within our communities. Therefore, we must stop using transgenic seeds and herbicides because they damage our lands, forests, our milpas. Seeds are life and are the root of the community.”

The threat to our seeds and our ancestral ways of sowing is great. Transnational seed companies intend to expropriate native seeds from Indigenous Peoples for profit. In addition, they have introduced genetically modified seeds and have promoted monocultures and the use of agrochemicals such as glyphosate, which penetrate the soil, filter into the water, and leave residues on the crops, and for which there is scientific evidence of its negative impact on human health and the environment.

Aldo González Rojas shares about the struggles of Indigenous Peoples of Mexico to protect native seeds and against agrochemicals.

“The public policy for food production has not supported small farmers. For example, with the ‘Sowing Life’ program, campesinos are forced to plant trees to meet the goals established by government institutions and do not have time to plant their basic crops.

The fight against GMOs that began in 2001 has permeated many peasants throughout the country, especially those who grow crops to eat, while GMOs have gotten into the heads of agroindustrial producers and Mennonites who have spread to the southeast Mexican.

Bees and monarch butterflies die from the use of agrochemicals in monoculture fields, while peasant and indigenous milpas continue to be corridors for wild flora and fauna. The jaguar walks among the diverse milpa like its protector, waiting for the arrival of wild boars and badgers that go for the corn.

That is the great difference in agriculture, that of the peasants who seek biological and cultural diversity, who survive with very little government support and refuse to die, compared to that of the companies that with all their technologies seek to seize the bodies and minds of the inhabitants of the planet with projects of death.”