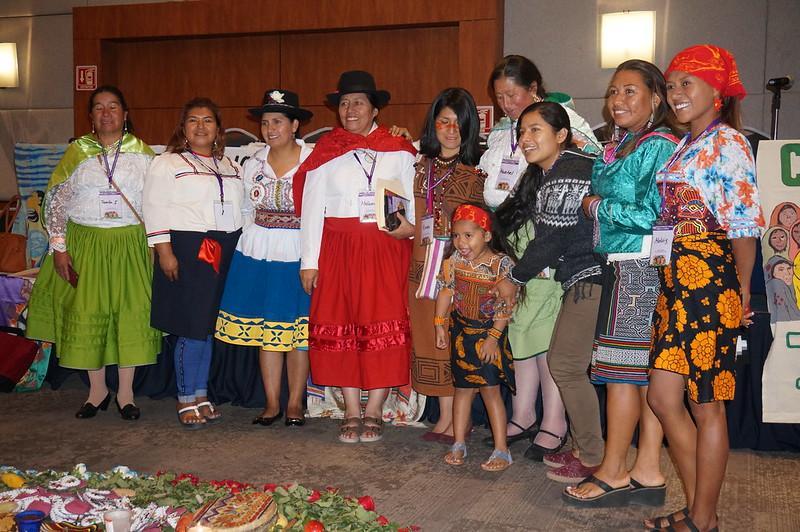 On February 26-29, 2020, the 8th Continental Conference of Indigenous Women of the Americas took place. The Conference was hosted by the Continental Network of Indigenous Women of the Americas (ECMIA), a network of organizations from 23 countries that has been fighting for more than two decades for the individual and collective rights of Indigenous women and children. The 8th Continental Meeting was held in Mexico City, where nearly 150 Indigenous women gathered, including leaders, elders, artists, midwives, parliamentarians, ex-parliamentarians, lawyers , communicators, filmmakers, rights defenders, academics and Indigenous authorities of the Americas. All met with the aim of regaining an intergenerational balance in collective and individual rights as Indigenous women and to build a strategic path for changes in laws, public policies, and national programs, as well as for the implementation of the international commitments adopted by States.

Each morning, a spiritual ceremony was held to ask the grandmothers for their wisdom and bring together thoughts that would lead to good and powerful meetings. This space was directed every day by Indigenous women from the different regions. Tarcila Rivera Zea (Quechua) from Peru, one of the founders of ECMIA, repeatedly mentioned that “these important meetings enable us to discuss the situation of Indigenous women regarding equality and justice. Everyone should strive to ensure that their local jobs are focused on achieving the well-being of all women in the world.” 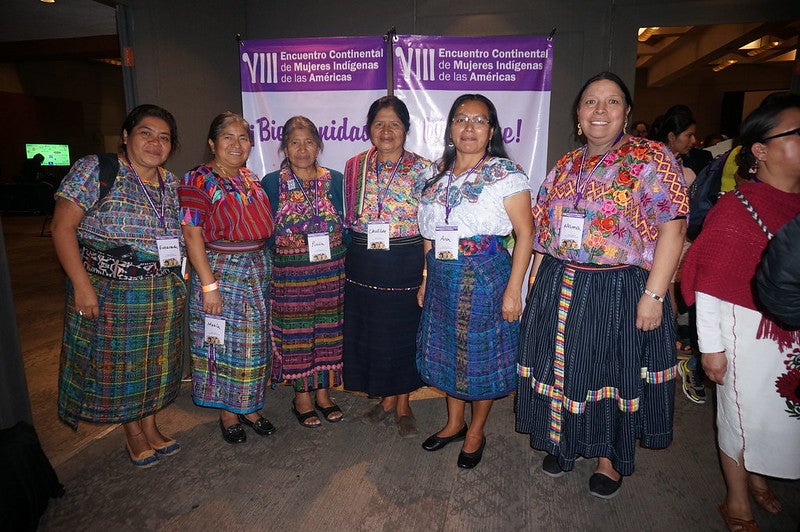 ECMIA celebrated its 25th anniversary this year, highlighting some of the achievements of its journey, such as the Beijing Platform for Action and the Cairo Program of Action, in addition to empowering adult and young women, some of whom have become parliamentarians, such as Tania Pariona Tarqui. The process of transition of positions to new ECMIA coordinators was carried out, determining who will be in charge for the following three years. 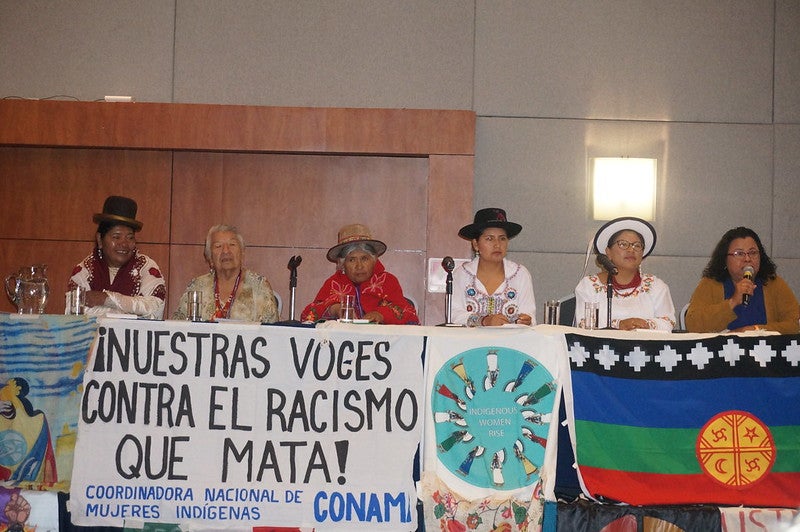 Indigenous filmmakers, communicators, and journalists from Mexico, the United States, Guatemala, Chile, Bolivia, and Canada led the discussion on Indigenous women's rights to communication. Each participant expressed their concern about the wave of persecution and criminalization of their work in some countries, mainly Mexico and Guatemala. Fátima Gamboa, a member of the Network of Indigenous Lawyers, explained that Mexican alternative cinema has been a tool that has allowed them to denounce violence against young women and girls from different parts of Mexico.

Rosario Sul, a Cultural Survival staff member, stated that Guatemala remains unresolved in favor of media for Indigenous Peoples, despite being stipulated in the Peace Accords signed in 1996. The State has ignored the different letters of appeal and recommendations of national and international bodies where they are asked to draft new legislation so that Indigenous Peoples can obtain frequencies and have control over their own media.

Shaandiin Ruth Anya Tome, from the Navajo Nation in the United States, explained that the media continue to be vital to the existence and vindication of Peoples. Tome has worked with young people in cinema and in journalism, where they share topics that affect young people such as drugs, premature pregnancy, and family disintegration.

María de los Ángeles Cruz Murillo, an internationally recognized Mexican actress and filmmaker, participated in this communication space and shared her experiences regarding violence against women, gender, and equality. At this roundtable discussion, many women demanded a stop to missing and murdered Indigenous women and a stop to the criminalization of Indigenous media. 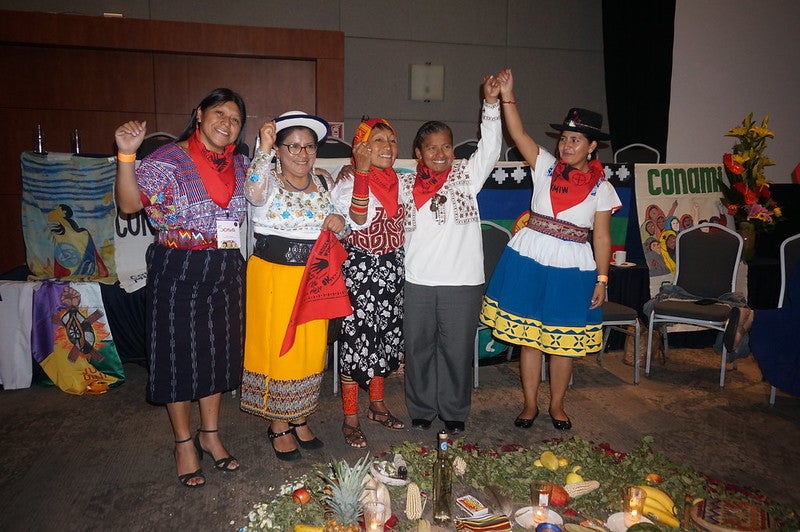 The 2030 Sustainable Development Goals were another area of focus of the meeting. The Goals seek to highlight the important role of women to ensure zero hunger, since their communities are implementing community harvests, exchanging and saving varieties of seeds, and recovering ancestral diets. Other topics where good practices are also being implemented to support the achievement of the sustainable development goals are the issues of equality, climate change, peace, justice, health and well being.

Young Indigenous women also had their space for dialogue and consensus on issues that concern them, recognizing that young women belong to a diverse group, being workers, students, defenders, and leaders. Young women were recognized for the very important roles they play in caring for and respecting mother earth. They demanded the cessation of megaprojects, deforestation, uncontrolled exploitation, and monocultures. They called on governments to address their needs in matters of justice, education, health and well being, while respecting their cultures and diversity. They demanded justice and reparation for all kinds of violence against Indigenous women and girls. The young women jointly declared that they will continue participating and articulating in spaces such as ECMI for the rights of Indigenous youth, as well as in political spaces to carry the voices of their communities and Peoples. 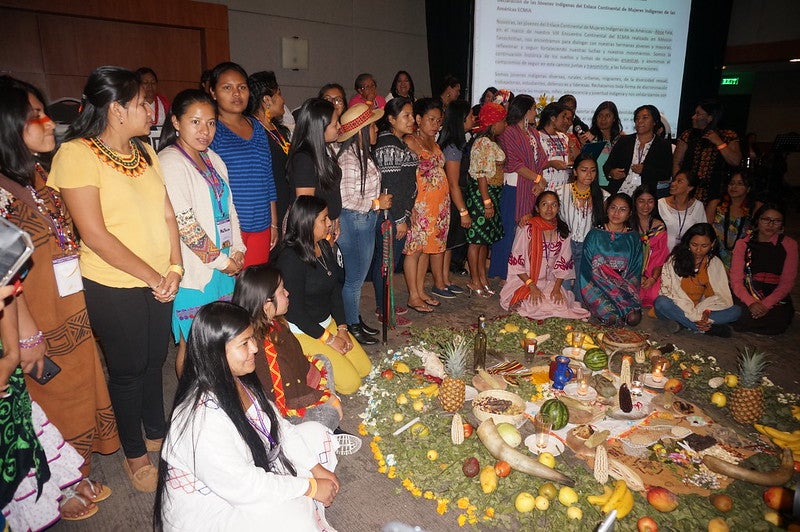 At the close of this gathering, a general discussion was held where all of the Indigenous women present raised their voices to approve the final document that compiled complaints, appeals, and demands to secure peace for their Peoples. “We denounce crimes against humanity, stigmatization, persecution, criminalization, feminicides, disappearances, and trafficking. We hold states responsible for not preventing and eradicating violence, as well as for not having mechanisms that guarantee life free of violence for Indigenous women….

“We demand sanction measures from the media that promote, reproduce and sustain stereotypes that reinforce racism, discrimination and all violence against Indigenous Peoples, women, youth and girls…. 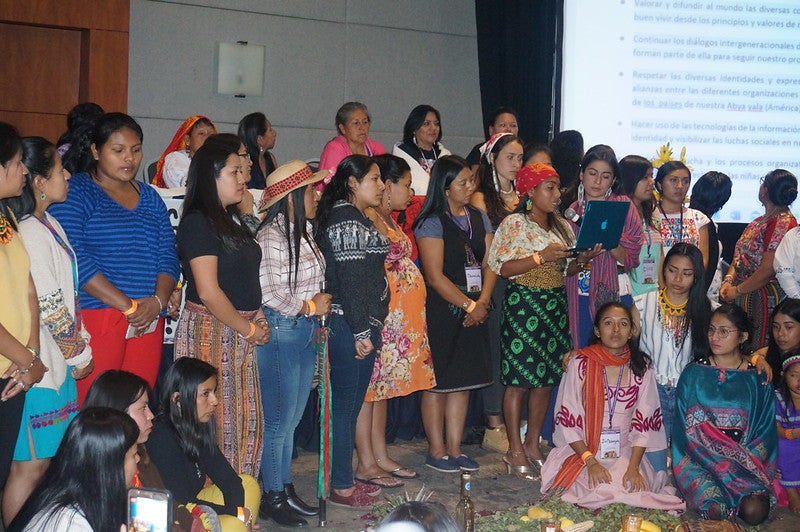 "We demand that the States take into account the efforts made by the Indigenous women's movement in response to the multiple forms of violence, turning it into public policies with a budget, interdisciplinary and intercultural human resources….

"We call on society in general, Indigenous and non-Indigenous people and decision makers, political and economic, to prioritize the value of life of Indigenous Peoples, women, youth and girls, recognizing the contributions to humanity and to climate balance as guardians of the land, forests, seeds, cultures, knowledge and life itself....

"We demand that the States adopt measures of individual and collective historical reparation to the Indigenous Peoples and women victims of violence, including the restriction, healing and compensation defined with full and effective participation of those affected… 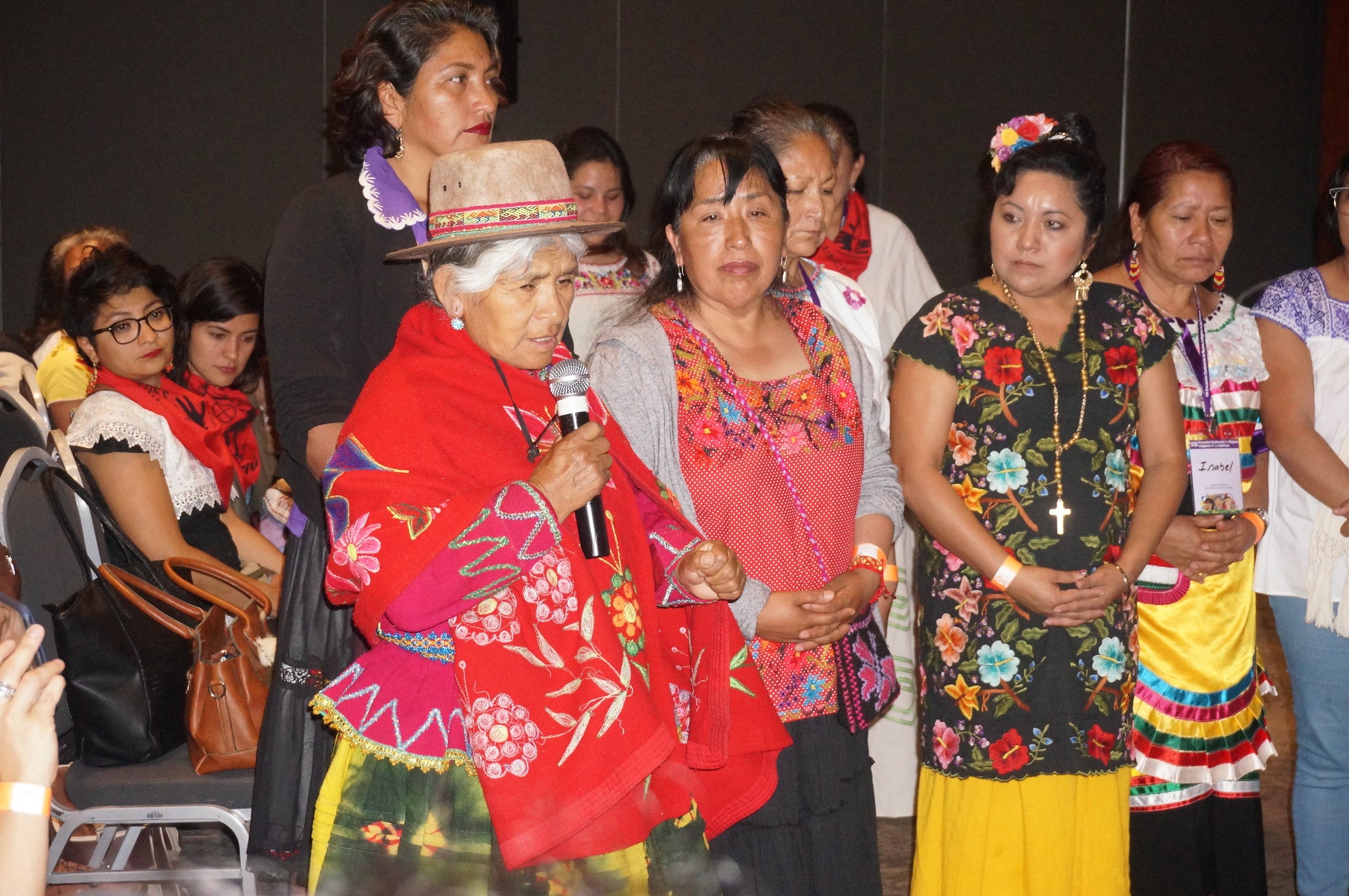 “The Indigenous women participating in this meeting, we, reaffirm our conviction of collective and organized struggle for our lives, we are leaving with the task of sowing joy and renewed hopes and the restoration of our identity for the healing and justice of our peoples… we call all young women, girls and IndigenousPeoples to celebrate our life, existence and projection, to take to the streets, highways and squares of each region of the continent for September 5; International Day of Indigenous Women, with the slogan #ForLandJusticeandSovereignty #AbyaYalaFreeofViolence #TodoConNosotrasNadaEnElMundoSinNosotras.”