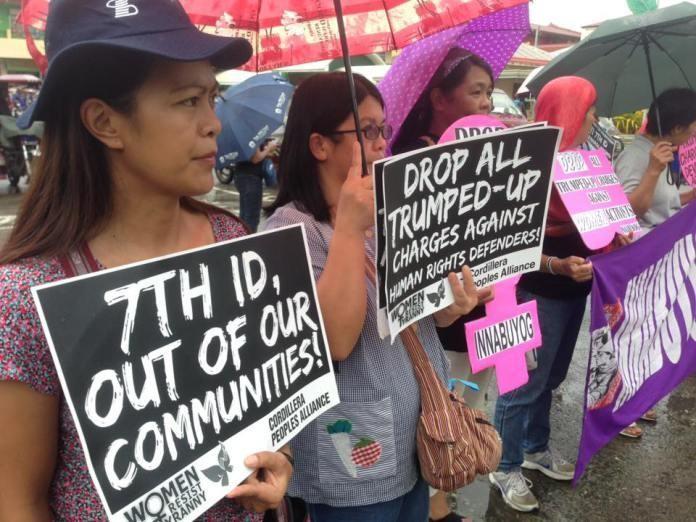 Five women defenders of human rights in the Philippines, after facing false accusations in 2017, have posted bail on February 9, 2018, in Galimuyod, Ilocos Sur. Aside from being subjected to continuous harassment and surveillance for their involvement with human rights and environmental causes in the Cordillera, Sarah Abellon-Alikes, Rachel Mariano, Joanne Villanueva, and Sherry Mae Soledad were falsely charged with homicide and frustrated homicide by the 7th Infantry Division of the Philippine Army.

Cordillera People’s Alliance and Cordillera Human Rights Alliance have released a joint press release regarding the trumped-up charges and the ongoing human rights abuses by President Duterte. On February 12, 2018, a press conference was held by the two alliances “to warn president Duterte of his imminent downfall for treading the path of dictators” and to demand “a stop to systematic attacks on human rights defenders, environmental activists and advocates of Indigenous People’s rights.”

These charges are just one of many tactics used to threaten and intimidate activists who are seen as “enemies of the State.” Cordillera People’s Alliance Secretary-General Bestang Dekdeken explains that these actions “aim to disrupt the delivery of services to far-flung communities which have suffered decades of neglect from the government.” All five women are involved in organizations that seek to peacefully defend marginalized Indigenous Peoples from harmful mining, dams, and plantations that destroy their lands. This struggle is particularly important for the Cordillera, the second-poorest region in the country year after year. CPA has thus been demanding the repeal of the Mining Act of 1995, which allows for foreign ownership of mining companies, and Duterte’s Executive Order 79, which lifted the ban on open pit mining.

Women activists across the country continue to fight in the face of blatant misogyny and constant attacks on human rights from President Duterte, who has been using taxpayers’ money to suppress people’s rights rather than to pay for much-needed social services. Further popular disapproval for Duterte comes from the TRAIN law that rapidly diminished the purchasing power of the poor and the middle class. The government is also responsible for nationwide illegal arrests, food and economic blockades, forced evacuations, and indiscriminate air-strikes with phosphorus bombs, all of which contribute to Duterte’s ongoing “reign of terror” over Filipino people.

For women, the attacks are particularly cruel, as Duterte has been known for rape jokes and sexist comments. Most recently, just last week Duterte threatened women activists in a speech to former rebels: “We will not kill you,” he said, “We will just shoot you in the vagina.” As Philippines researcher for Human Rights Watch Carlos H. Conde explains, this comment “encourages state forces to commit sexual violence during armed conflict, which is a violation of international humanitarian law.” Emmi de Jesus of the Gabriela Women’s Party notes that Duterte “has further presented himself as the epitome of misogyny and fascism terribly rolled into one.” As Cordillera Human Rights Alliance Vice-Chairperson Audrey Beltran warns, “Duterte should be reminded that all the dictators in history fell and were forcibly removed by the people they oppressed.”

Cultural Survival stands with the five brave women in their fight against Duterte’s fascist reign. To show your support, sign Women Resist Tyranny’s petition to drop the charges against Rachel, Sarah, Sherry Mae, Joan, and Asia.