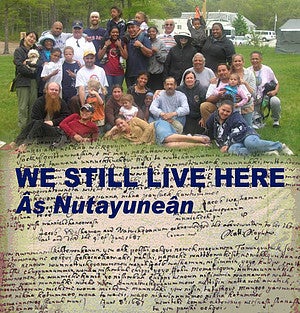 This Saturday, February 12, at 2pm, Âs Nutayuneân will be screening at the Big Sky Film Festival in Missoula, MT.  Filmmaker Anne Makepeace will be in attendance.

The story of the Wôpanâak Language Reclamation Project touched audiences and reviewers at the Santa Barbara International Film Festival and was selected among more than 200 entries as one of 41 Films to See by reviewers.

The documentary tells of an extraordinary struggle for cultural survival and Indigenous language recovery among the Wampanoag Nation of southeastern Massachusetts, and stars the members of a 15-year-old community language reclamation project that relied almost entirely on volunteer efforts for more than a decade, a true model for Native communities across America striving to protect tribal sovereignty, build healthier communities, and assert language rights by revitalizing tribal languages and cultural practices long outlawed by state and federal government policies and practices.

Produced with the assistance of Cultural Survival’s Endangered Languages Program, the film brings viewers a powerful message about the value, richness, and diversity of Indigenous cultures in our midst, and of the extreme fragility of these linguistic national treasures (half of America’s remaining Indigenous languages could vanish within the next five years without intensive training interventions resulting in new fluent speakers among younger generations). To order a copy of the film click here.