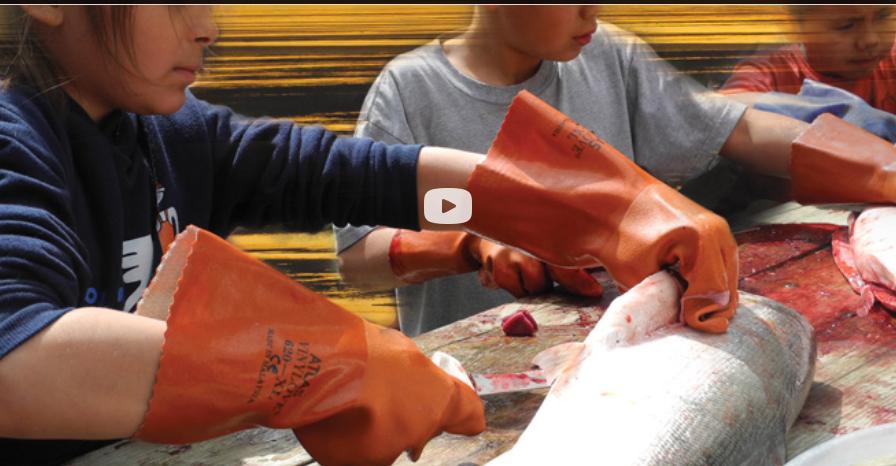 We Can’t Eat Gold (2013), a new documentary directed by Joshua Tucker, gives voice to the local inhabitants of Bristol Bay as they oppose the construction of the Pebble Mine. The documentary is comprised of interviews—many of which are set in front of the beautiful lakes, rivers, and mountains of the region—highlighting the local community’s disapproval of the South African and Canadian Pebble Partnership Mine. The mine would be one of the largest open-air mines in the world if approved.

Residents of Dillingham, Alaska speak up in the film to ardently oppose the mine as a threat to both their subsistence livelihoods and their commercial fishing economy. Both practices are dependent on the local salmon populations: renewable and sustainable resources that fuel the lives and economy of both indigenous and itinerant fishermen.  A Yup’ik elder states, “We can’t eat gold. But we can eat salmon,” invoking the belief that, despite any rules and safety regulations Pebble Mine might be forced to abide by, such a project is not renewable and will inevitably alter the local ecology for the worse.

The film largely avoids entering directly into a dialogue with the Pebble Partnership whose CEO John Shively states “If we can’t build a mine that co-exists with a healthy fishery, we will not build the mine.” We Can’t Eat Gold cultivates an ethos of a people that view the mine as an inevitable disruption to the health and future of salmon fishing. A chief of the Curyung Tribe equates the potential loss of salmon due to the mine with the loss of the buffalo for the Great Plains Indians.

We Can’t Eat Gold provides the viewer with an insight into the affect and sensibilities of community members who feel threatened by the proposed Pebble Mine. The film bypasses legalistic jargon of the ongoing disputes between the EPA and the Pebble Partnership to paint a portrait of the subsistence practices of the native people of the Bristol Bay region. An interviewee comments on community and family dependency on salmon, stating that family means culture, and culture is tied to the land. There is a worry that if the Pebble Mine gets permitted, it will invite other landowners to exploit the resources as well. The film addresses the question of consent amongst indigenous peoples and local fishermen of the proposed project’s affected region. And the answer is, sensibly, no.