“We Are Still Here!” Indigenous Peoples March Is Heading to D.C. 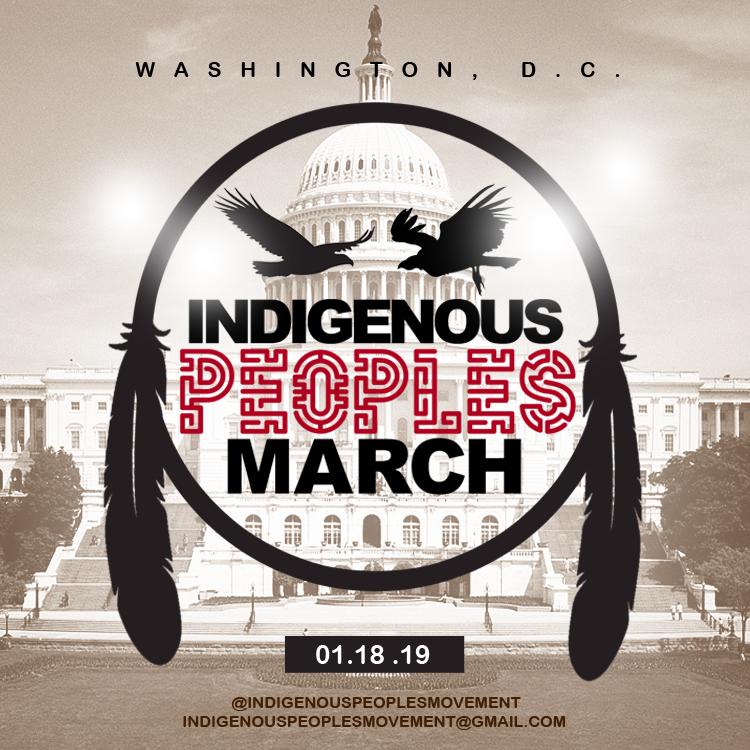 On January 18, 2019, we are uniting the Indigenous Peoples across the world to stand together to bring awareness to the injustices affecting Indigenous men, women and children. Indigenous People from North, Central and South America, Oceania, Asia and the Caribbean are a target of genocide. The Indigenous Peoples March will be the first International march of its kind - this is history in the making!

Currently, many Indigenous People are victims of voter suppression, divided families by walls and borders, an environmental holocaust, sex and human trafficking, and police/military brutality with little to no resources, nor awareness of this injustice.

We Must Unite and Help!!

We are inviting a ‘call to action’ for defenders of human and environmental rights to join us, in Washington DC, in front of the Office of Interior Affairs on January 18, 2019, at 8am (which is the day before the Women's March). This will be the first step of uniting our communities, tribes and nations in a universal cry for justice from the grassroots level and up. This march is the beginning of building strong coalitions to make our homes, families, and lands a safe, protected, and a clean place to live.

The goal of The Indigenous Peoples Movement coalition is to eliminate the borders of our injustices, as it all starts with us! Whether it is asserting our inherent treaty rights to protect and manage traditional land, waterways, or to engage in our traditional knowledge, the Indigenous grassroots action is organized and strong!

The Washington D.C. inaugural march will also explore the challenges and possible solutions to revitalize Indigenous Peoples’ identities and encourage the protection of their rights in or outside of their traditional territories.

INDIGENOUS PEOPLES MARCH IN WASHINGTON, DC WILL OCCUR ON FRIDAY, JANUARY 18, 2019
(DAY BEFORE THE WOMEN'S’ MARCH ON WASHINGTON)

THE INDIGENOUS PEOPLES MARCH IN WASHINGTON DC IS A GRASSROOT EFFORT COMPRISED OF DOZENS OF INDEPENDENT COORDINATORS AT THE STATE AND TRIBAL LEVEL. THE EFFORT IS HELMED BY A COALITION OF ORGANIZATIONS, TRIBAL COUNCILS, ACTIVISTS, INFLUENCERS, MEDIA AND YOUTH LEADERS COMMITTEE TO MAKE SURE THIS MARCH IS A SUCCESS.

THE PROGRAM ON FRIDAY, JANUARY 18, 2019 WILL FEATURE VOICES FROM ALL INDIGENOUS COMMUNITIES AND NATIONS THAT ARE INVOLVED IN THE INJUSTICES AFFECTING INDIGENOUS PEOPLES. WE WILL ALSO BE FEATURING CULTURAL PRESENTATIONS OF SONG, DANCE AND PRAYER.

“We are all related” evening fundraising concert

ON THE EVENING OF JANUARY 19TH, WE WILL BE HOSTING A FUNDRAISING CONCERT AT SONGBYRD MUSIC HOUSE. THE SHOW WILL FEATURE VARIOUS INTERNATIONAL INDIGENOUS ARTISTS AND ACTS. THE COVER WILL BE $20 AT THE DOOR, AND WILL RUN FROM 7PM - 12AM.

MORE DETAILS TO BE ANNOUNCED.